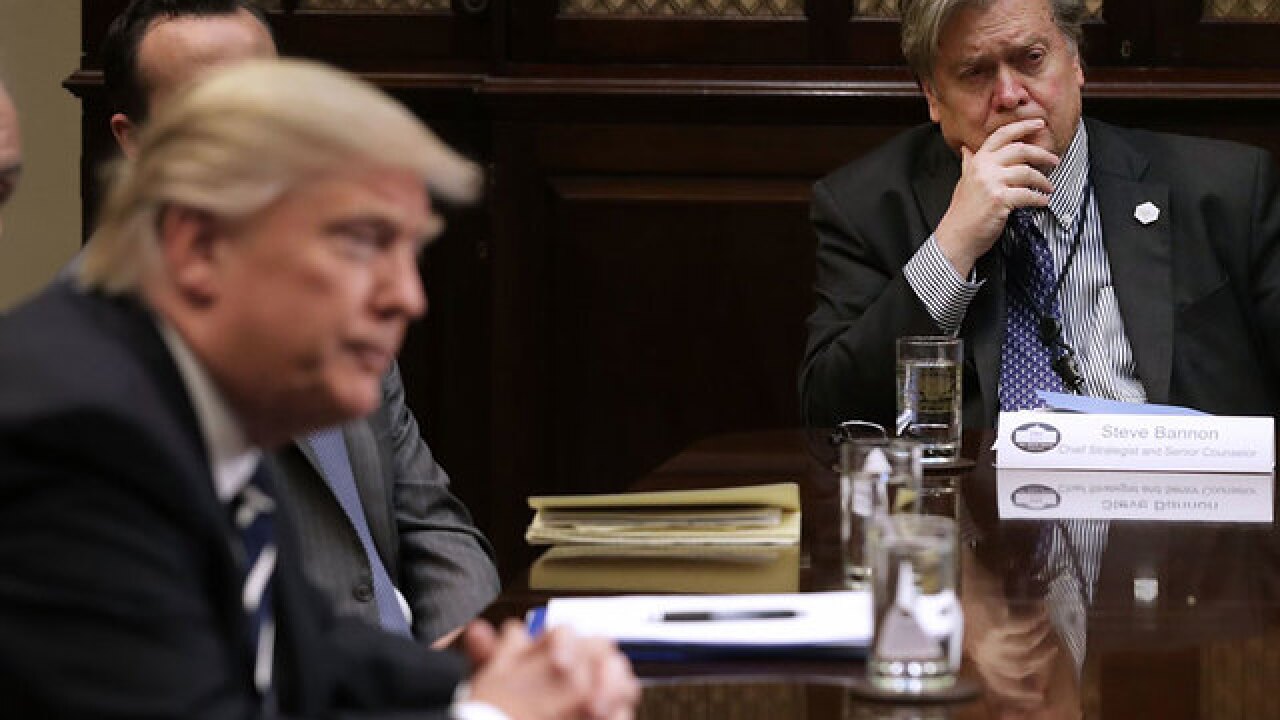 While hosting the Breitbart News Tonight show on SiriusXM, Bannon told a caller: "The President of the United States is a great man. You know, I support him day in and day out."

Meanwhile, Trump's attorney said that he has sent a cease-and-desist letter to Bannon over the critical comments made in the forthcoming book by Michael Wolff titled "Fire and Fury."

The statement from attorney Charles Harder said: "This law firm represents President Donald J. Trump and Donald J. Trump for President, Inc. On behalf of our clients, legal notice was issued today to Stephen K. Bannon, that his actions of communicating with author Michael Wolff regarding an upcoming book give rise to numerous legal claims including defamation by libel and slander, and breach of his written confidentiality and non-disparagement agreement with our clients. Legal action is imminent."

In the book, Bannon opened up to Wolff about several White House topics, including the infamous 2016 Trump Tower meeting between campaign officials and a Russian lawyer. He also said special counsel Robert Mueller's investigation into the Trump campaign's potential ties to Russia is centered on money laundering.

"Many mostly Democrat States refused to hand over data from the 2016 Election to the Commission On Voter Fraud. They fought hard that the Commission not see their records or methods because they know that many people are voting illegally. System is rigged, must go to Voter I.D.," Trump said in a Thursday morning tweet.

Trump established the commission in May after claiming without evidence that massive voter fraud had cost him the popular vote, and he appointed Vice President Mike Pence and Kansas Secretary of State Kris Kobach to lead the panel.

But after months went by and the commission faced pushback from officials across the country, civil rights advocates and even a member of the commission itself -- as well as an unclear mandate, according to the White House official -- Trump pulled the plug Wednesday.

Talk show host Colbert wants to win a "Fake News Award"
-- Earlier this week, President Trump said he would hold "the most dishonest & corrupt media awards of the year," and CBS "Late Show" host Stephen Colbert is hoping he will be considered.

I will be announcing THE MOST DISHONEST & CORRUPT MEDIA AWARDS OF THE YEAR on Monday at 5:00 o’clock. Subjects will cover Dishonesty & Bad Reporting in various categories from the Fake News Media. Stay tuned!

On Wednesday night's show, Colbert announced he is taking out "For Your Consideration" billboards to put himself in the running. He said, "Personally I'm excited for the most dishonest and corrupt media awards of the year or as we call them in the biz, 'The Fakies.' Because nothing gives you more credibility than Donald Trump calling you a liar."

So excited for Monday’s “MOST DISHONEST & CORRUPT MEDIA AWARDS OF THE YEAR!” See you on the red carpet, @AndersonCooper! #TheFakies pic.twitter.com/r8pYCj0g9r

Since his initial "media awards" tweet, Trump has not touched on the topic.

White House press secretary Sarah Sanders, at her briefing on Tuesday, called the SEC teams "two great teams from two great states, both in the heart of Trump country."