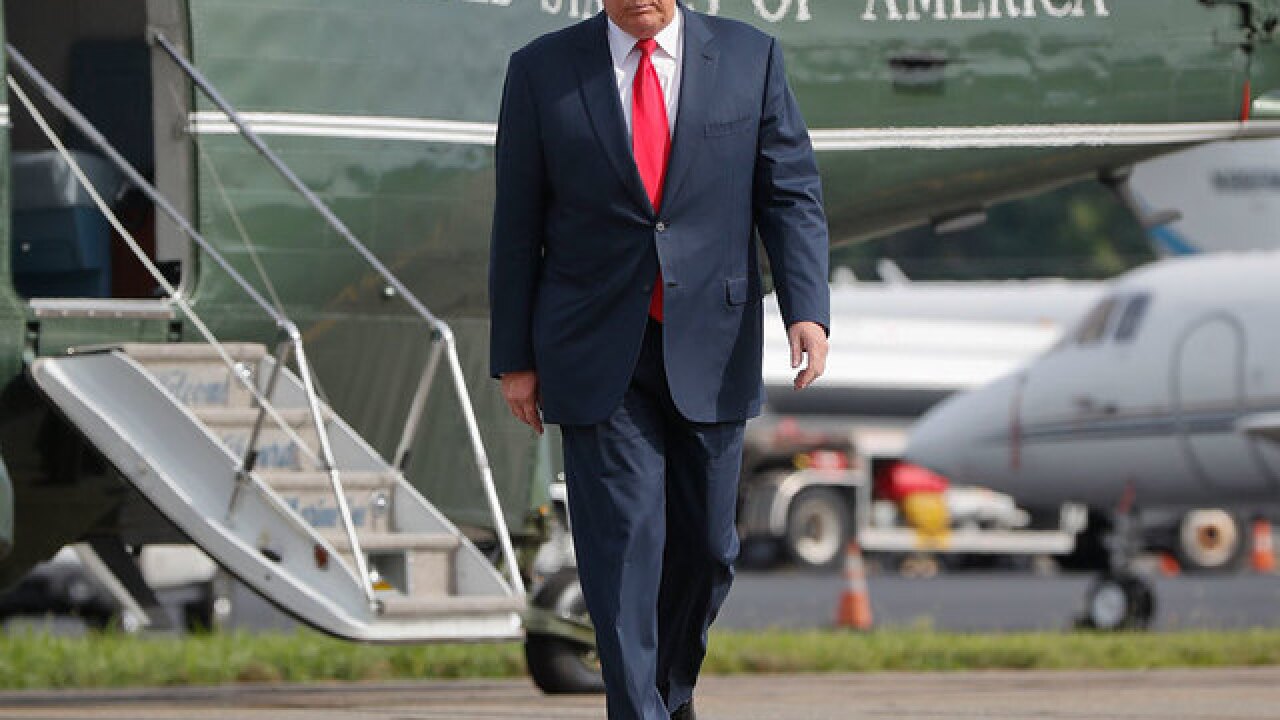 Copyright Associated Press
Pablo Martinez Monsivais
In this Aug. 14, 2017 file photo, President Donald Trump walks across the tarmac from Marine One to board Air Force One at Morristown Municipal Airport in Morristown, N.J.

-- President Trump took to Twitter this morning to thanks ousted former White House chief strategist Steven Bannon, tout the "many decisions made" at Camp David, and send thoughts and prayers to Kissimmee, Fla., police following a deadly shooting.

Important day spent at Camp David with our very talented Generals and military leaders. Many decisions made, including on Afghanistan.

I want to thank Steve Bannon for his service. He came to the campaign during my run against Crooked Hillary Clinton - it was great! Thanks S

My thoughts and prayers are with the @KissimmeePolice and their loved ones. We are with you!#LESM

Trump will be back in Bedminster, New Jersey, on Saturday.

Billionaire Carl Icahn steps down as adviser to Trump

-- Billionaire investor Carl Icahn has resigned from his role on President Trump's regulatory council citing concern that he did not want "partisan bickering about my role to in any way cloud your administration."

In a letter posted on his website, Icahn acknowledges leaving with Trump's "blessing," though did not indicate what prompted his decision to leave.

Democratic lawmakers have criticized Icahn's advisory role, saying he has not accepted an official government job and has created a conflict of interest while continuing to run his businesses.

Icahn denied this in his resignation letter.

"And contrary to the insinuations of a handful of your Democratic critics, I never had access to nonpublic information or profited from my position, nor do I believe that my role presented conflicts of interest," the letter stated. "Indeed, out of an abundance of caution, the only issues I ever discussed with you were broad matters of policy affecting the refining industry."

"The President and First Lady have decided not to participate in this year's activities to allow the honorees to celebrate without any political distraction," a statement from the White House said.

The White House's announcement comes the same week Lionel Richie, one of this year's honorees, said he would play whether he would attend by ear, citing political "controversies."

"The Kennedy Center respects the decision made today by the office of the President of the United States. In choosing not to participate in this year's Honors activities, the Administration has graciously signaled its respect for the Kennedy Center and ensures the Honors gala remains a deservingly special moment for the Honorees. We are grateful for this gesture."

Gingrich: Trump is "more isolated" than he realizes

"I think he's in a position right now where he's much more isolated than he realizes," Gingrich said hours after Trump's chief strategist Steve Bannon was fired.

"On the Hill, he has far more people willing to sit to one side and not help him right now, and I think that he needs to recognize he's taken a good first step with bringing in Gen. (John) Kelly (as chief of staff), but he needs to think about what has not worked," Gingrich said.