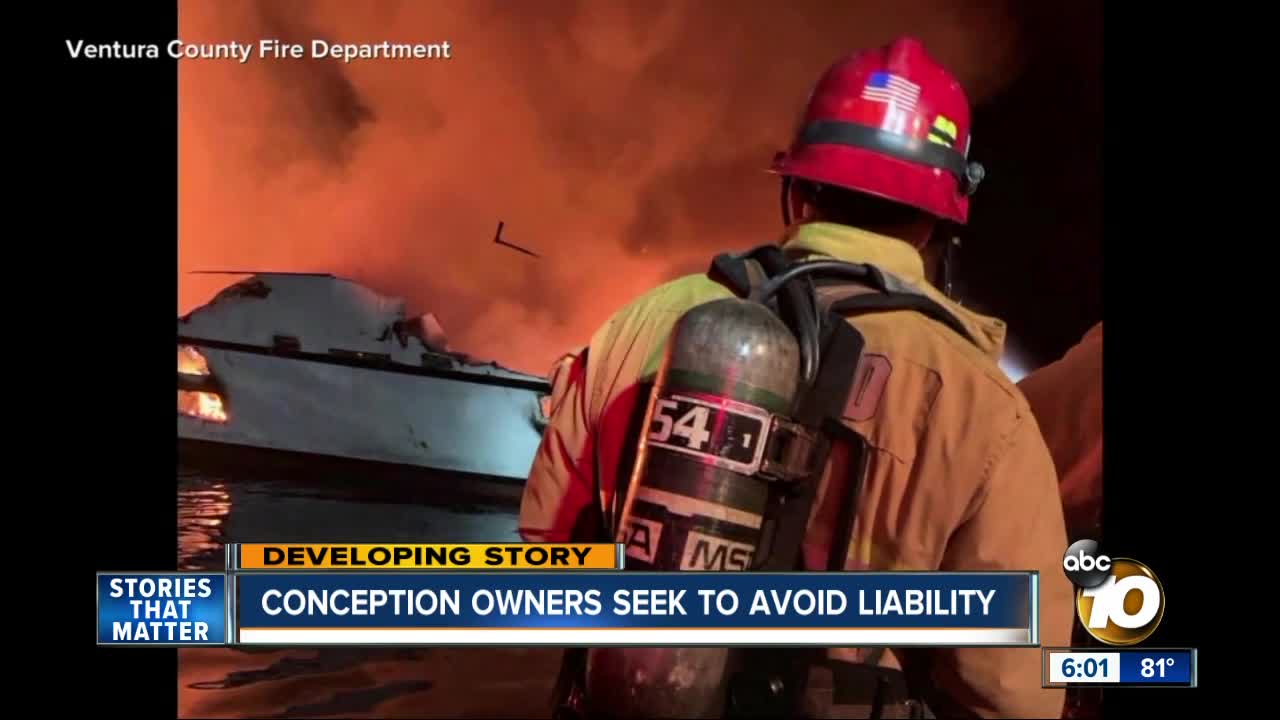 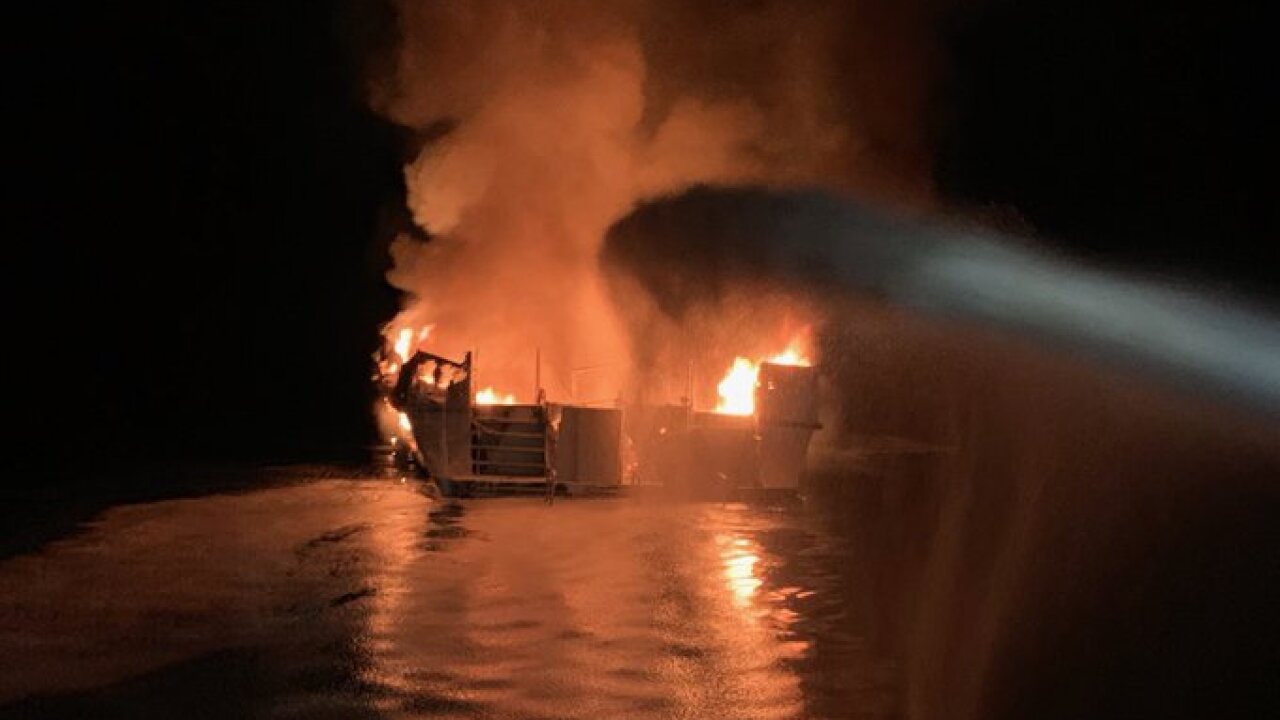 LOS ANGELES (AP) - The owners of the dive boat where 34 people perished in a fire off Southern California filed a lawsuit Thursday to head off potentially costly litigation, a move condemned by some observers as disrespectful to the families of the dead.

Truth Aquatics Inc., which owned the Conception, filed the action in U.S. District Court in Los Angeles under a pre-Civil War provision of maritime law that allows it to limit its liability.

Investigators are still searching for what caused the blaze that wrecked the boat, which remains upside down at the bottom of the sea near the Channel Islands.

The time-tested legal maneuver has been successfully employed by owners of the Titanic and countless other crafts — some as small as Jet Skis — and was widely anticipated by maritime law experts. Still, the fact it was filed just three days after the deadly inferno Monday came as a surprise to legal observers.

Families of the deceased, who are not named in the complaint, will be served with notice that they have a limited time to challenge the company's effort to clear itself of negligence or limit its liability to the value of the remains of the boat, which is a total loss.

"They're forcing these people to bring their claims and bring them now," said attorney Charles Naylor, who represents victims in maritime law cases. "They have six months to do this. They could let these people bury their kids. This is shocking."

"It seems like a pretty heartless thing to do, but that's what always happens. They're just protecting their position," Davies said. "It produces very unpleasant results in dramatic cases like this one. ... The optics are awful."

The U.S. law dates to 1851, but it has its origins in 18th century England, Davies said. It was designed to encourage the shipping business. Every country with a shipping industry has something similar on the books.

In order to prevail, the company and owners Glen and Dana Fritzler have to show they were not at fault in the disaster.

They asserted in the lawsuit that they "used reasonable care to make the Conception seaworthy, and she was, at all relevant times, tight, staunch, and strong, fully and properly manned, equipped and supplied and in all respects seaworthy and fit for the service in which she was engaged."

Even if the captain or crew are found at fault, the Fritzler's and their insurance company could avoid paying a dime under the law, experts said.

All of those who died were in a bunkroom below the main deck. Officials have said the 33 passengers and one crewmember had no ability to escape the flames.

"The other crew at a certain point when the flames had engulfed the boat and they were in the water, they could see Jerry jump from the upper deck, a long jump. And there was a trail of smoke following him. They thought he was on fire," Fritzler told KEYT-TV in Santa Barbara.

"Within minutes they would've been consumed," he said. "So they did their best. They did re-enter the vessel from the back of the boat after they swam around it. They could not get to firefighting equipment because everything was engulfed."

Authorities said the survivors used a skiff at Conception's stern to reach a nearby boat and two then returned to see if they could rescue any other survivors but none were found.

Fritzler said the experience has traumatized the survivors.

"They're breaking down," he said. "They're seeking counseling. It's a very tough time for them."

None of the survivors has spoken publicly.

The court filing not only seeks to protect the boat owners from legal exposure, but also will require any lawsuits to be filed in the same federal court.

A judge will hold a non-jury trial to see if the company can successfully show it wasn't at fault. If that's the case, any claimants would only be entitled to the value of the remains of the ship, which the suit said is a total loss with zero value.

There's a long history of ship owners successfully asserting this protection. The case involving the White Star Line, the owners of the Titanic, went all the way to the U.S. Supreme Court, which held that a foreign owner could assert protection of the Limitation Act, attorney James Mercante said.

In that case, plaintiffs eventually withdrew their lawsuits and filed them in England, where the company was based. British law, even though it also limited damages, provided a bigger payout than the value of the remaining lifeboats.

While the law can shield owners from damages, over 90% of cases where injury and death are involved are settled before trial, Mercante said.

Attorney A. Barry Cappello, who is in discussions with another firm to represent family members of the Conception victims in court, said there's a strong case to show negligence in the boat fire and that good lawyers can find a way around the admiralty law in federal court.

"The law is so antiquated and so skewed in favor of the ship owners that damages for wrongful death type cases is very limited unless one can prove exceptions," Cappello said.

Cappello recently prevailed in a case in which a company that rented a paddleboard to a man who drowned in Santa Barbara Harbor had asserted the liability protection. A judge ruled the admiralty law didn't extend to such crafts, though the company has appealed.

Davies said from what he's heard of the disaster, there's a realistic prospect the owner might prevail if the boat was properly equipped and the cause of the fire remains mysterious.

If the owner loses, there's the potential of unlimited liability.

"That's why the fight is always about limitation because if you've got unlimited liability, well, ... 30 dead people is a whole lot of money," Davies said.

(Copyright 2021 The Associated Press. All rights reserved. This material may not be published, broadcast, rewritten or redistributed.)