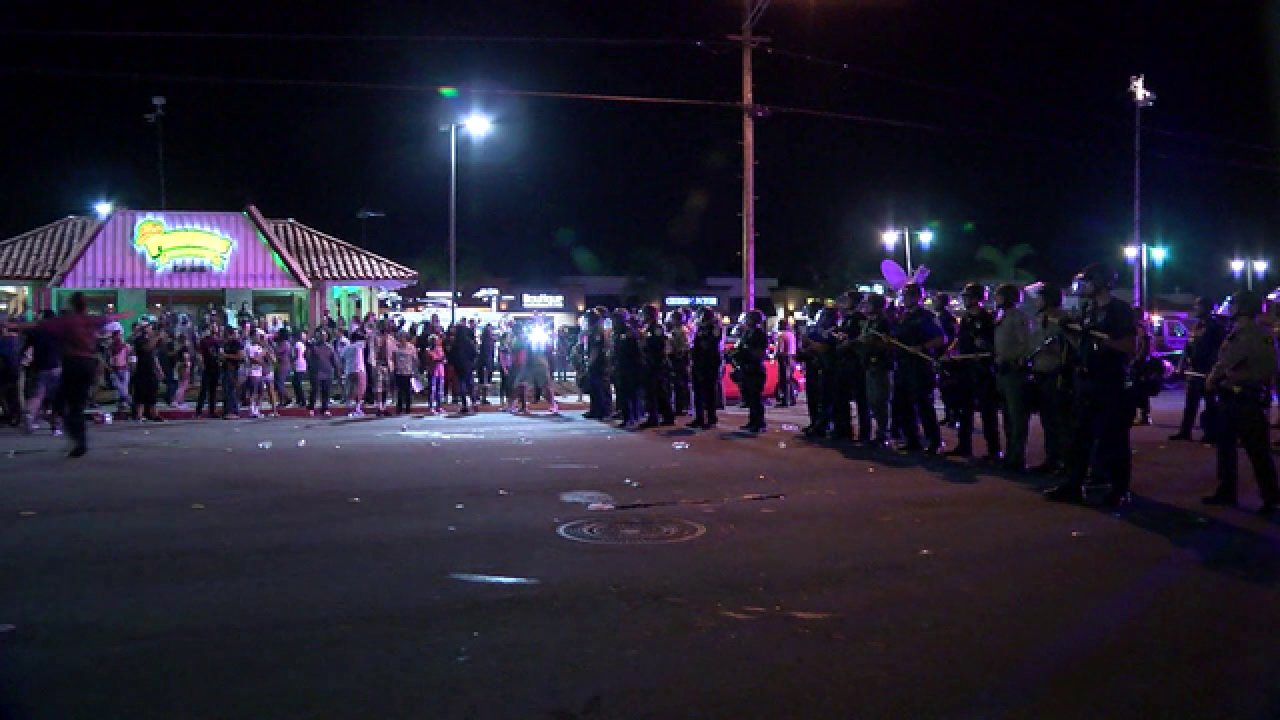 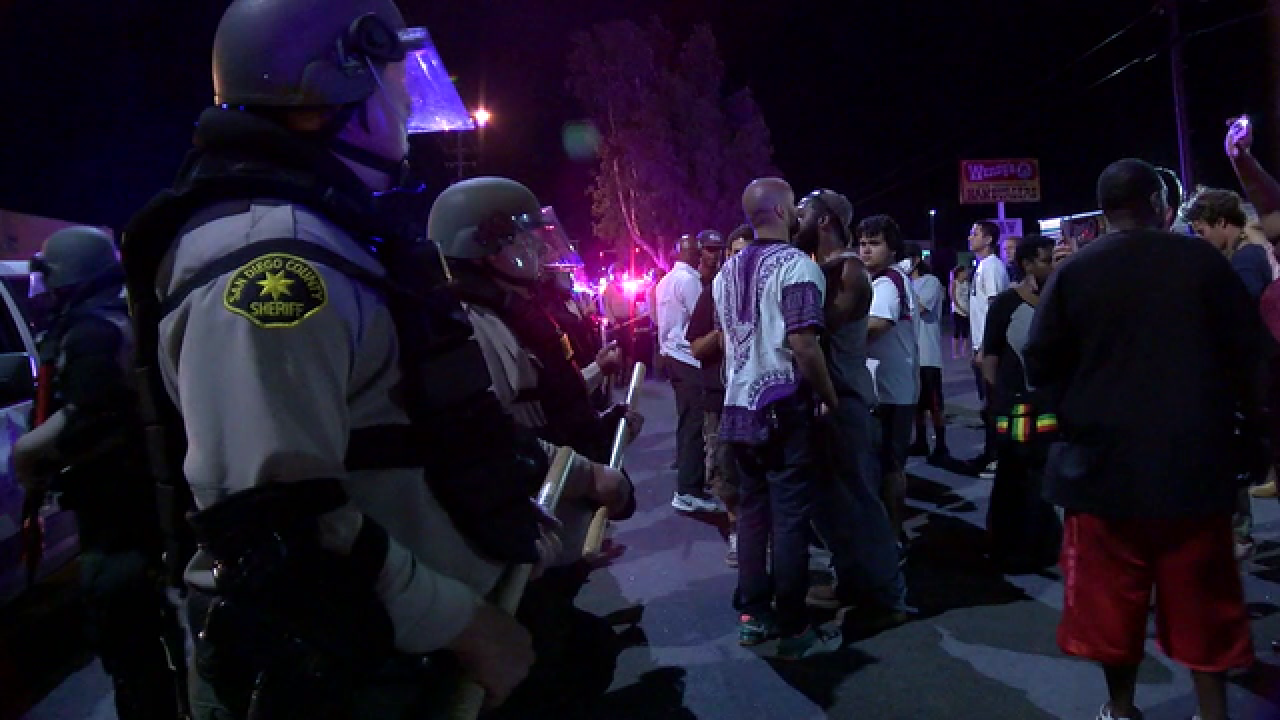 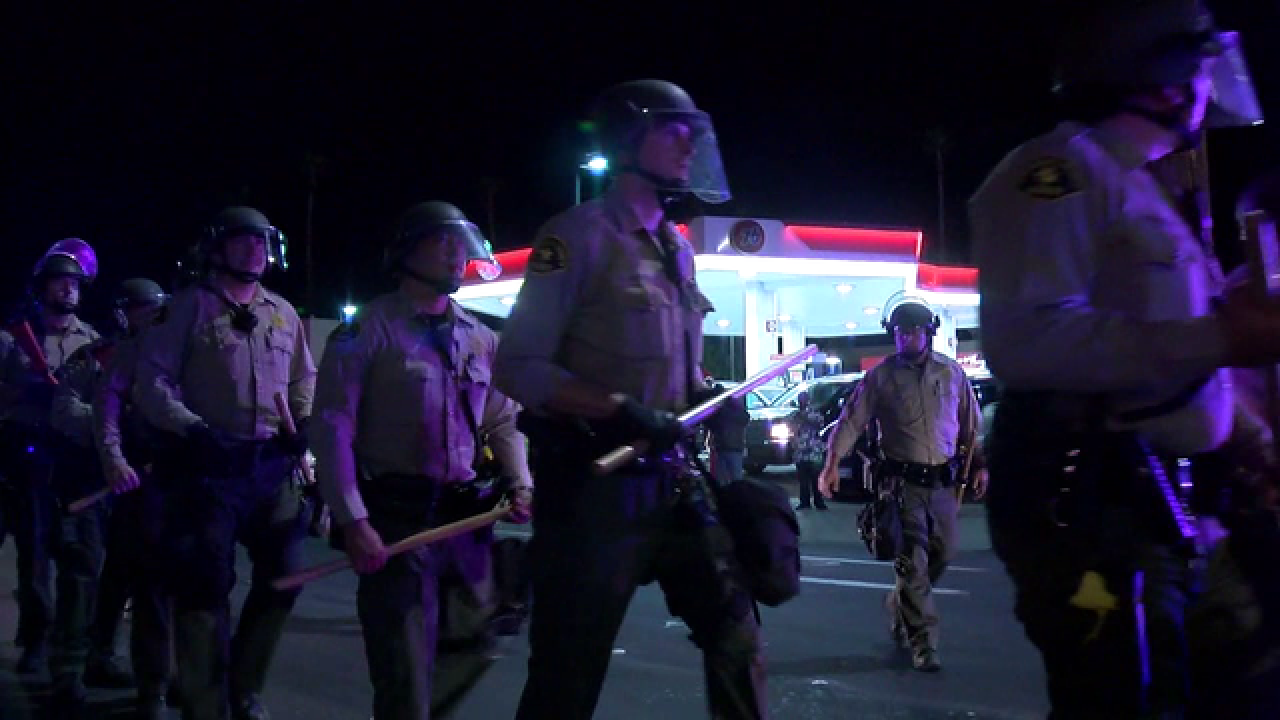 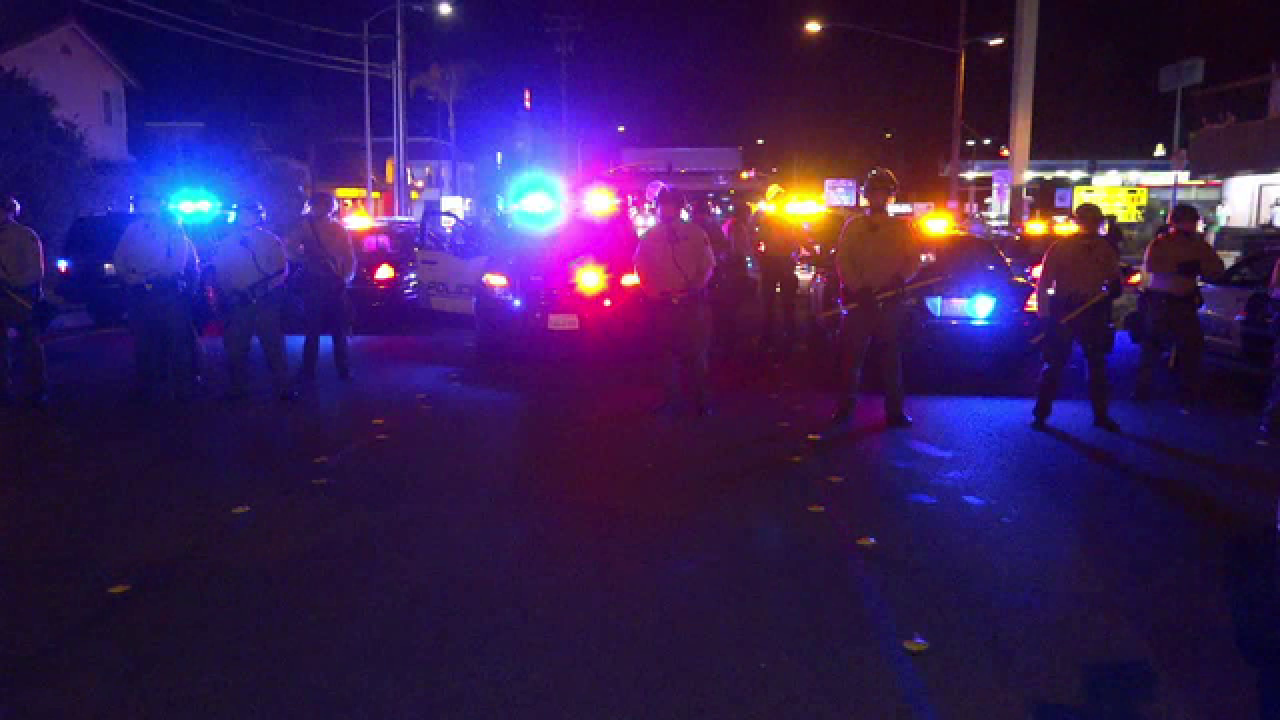 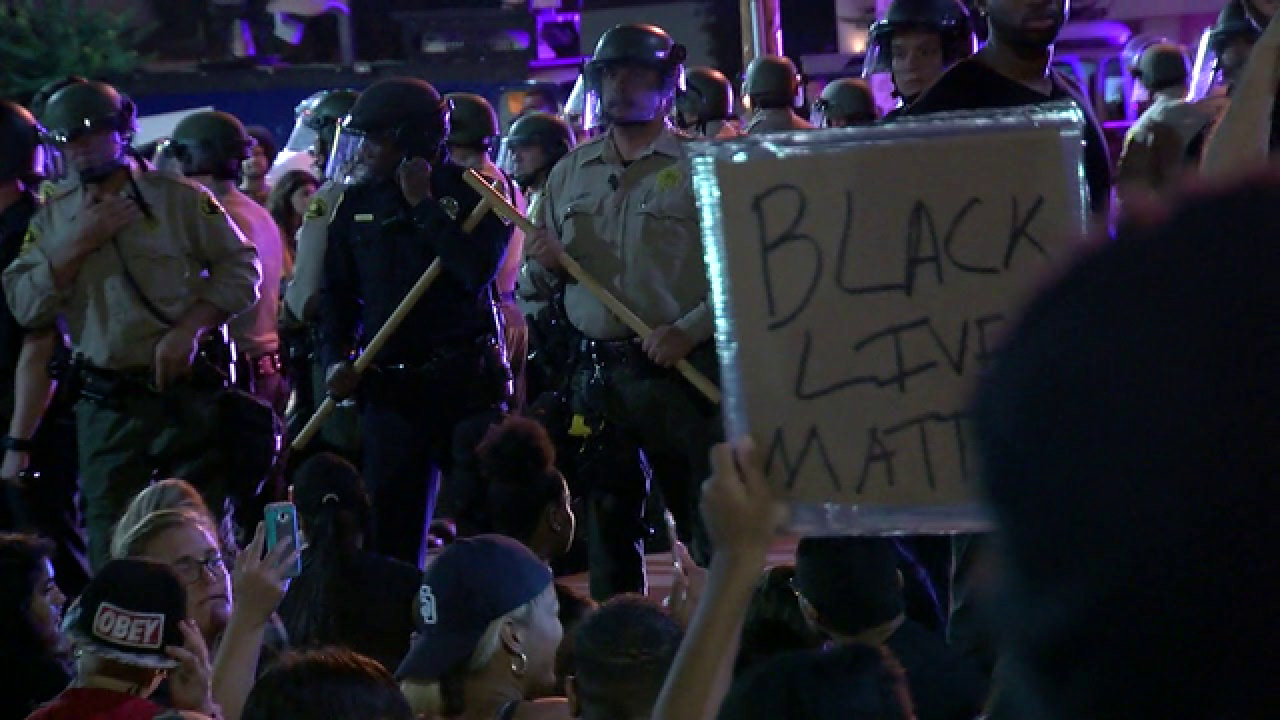 By: 10News Digital Team
Posted at 6:35 AM, Sep 29, 2016
EL CAJON, Calif. -- Tensions mounted overnight Wednesday as protests continued over the shooting death of an unarmed black man by El Cajon police Tuesday afternoon.
Thousands of people took to the streets Wednesday and into the early morning hours Thursday to protest the killing of 38-year-old Uganda native Alfred Olango in a strip mall parking lot by two police officers.
At around 2 a.m. Thursday, El Cajon police in riot gear cleared the streets around Broadway and Mollison Avenue. At one point, an officer got on a loudspeaker declared “an unlawful assembly.”
However, there have been no reported arrests so far Wednesday or Thursday.
Early Thursday morning, a group of protesters attacked an independent photographer and mugged him of his camera. The photographer filed a police report. He was not seriously hurt.
On Wednesday afternoon, a man in a Donald Trump hat was attacked by protesters in the Broadway Village shopping center parking lot. There was no immediate word on his injuries.
Protesters are demanding that police release smart phone video that was allegedly taken of the shooting by a witness. Police have so far released only a single still image from the video, but not the entire footage.
Olango was mortally wounded outside a strip mall restaurant near the intersection of Interstate 8 and state Route 67.
RELATED STORIES:
Man shot by El Cajon police dies
Overnight protests tense, but not violent
Who is Alfred Olango?
Police protesters march through El Cajon
Protesters rush man in Trump gear
Bishop calls for transparent investigation
PHOTOS: Bystanders react after El Cajon officer-involved shooting
One witness told reporters Olango had his hands raised when shots rang out, and another indicated he may have suffered a seizure. However, police said Olango was uncooperative, had repeatedly refused to remove his hand from his pocket, assumed "what appeared to be a shooting stance," and pointed an object that turned out to be an electronic smoking device at one of the officers.
On Wednesday afternoon, demonstrators headed to where the deadly encounter played out less than 24 hours earlier, a commercial district a few blocks north of El Cajon Valley High School. A rally continued into the evening and protesters at times blocked streets and faced off with rows of officers in riot gear. The disruptions prompted the temporary closure of nearby Parkway Plaza mall.
El Cajon Mayor Bill Wells said during a late Thursday afternoon briefing that he was "completely fine" with peaceful protests is concerned about the potential for the protests to turn destructive.
"I see what's happening all over the country," Wells said. "Of course I'm worried. ... I don't expect anything bad to happen, but I certainly don't want to be caught unaware."
Wells said he had seen the full video and was deeply affected by it but was holding off on any judgments.
"I saw a man who was distraught, a man who was acting in ways that looked like he was in great pain," Wells said. "And I saw him get gunned down and killed, and it broke my heart."
Each of the officers, who had more than 20 years of law enforcement experience, were placed on administrative leave, per protocol. Police have promised a thorough and transparent multi-agency investigation. Protesters called for a federal investigation.
Critics have questioned why personnel with special training to deal with the mentally ill were not dispatched after police received a report that Olango was behaving erratically and walking in traffic. A distraught woman who identified herself as Olango's sister could be heard just after he was shot asking why officers shot her brother after she called for help and told police he was troubled.
Police later said a Psychiatric Emergency Response Team clinician was on another call at the time.
Authorities disputed claims that bystanders' cellphones were taken at the scene. Only one was voluntarily turned over.
According to friends, Olango was born in Kampala, Uganda, as one of nine children. His mother and siblings emigrated to New York as refugees in 1991, apparently because his father -- who worked for the late Ugandan President Idi Amin -- had threats of violence against them.
The family eventually moved to Southern California, and Olango attended San Diego High School for a time before dropping out, though he later earned a GED. According to his Facebook page, he attended San Diego Mesa College and worked at a Hooters restaurant.
Copyright 2016 Scripps Media, Inc. City News Service contributed to this report. All rights reserved. This material may not be published, broadcast, rewritten or redistributed.