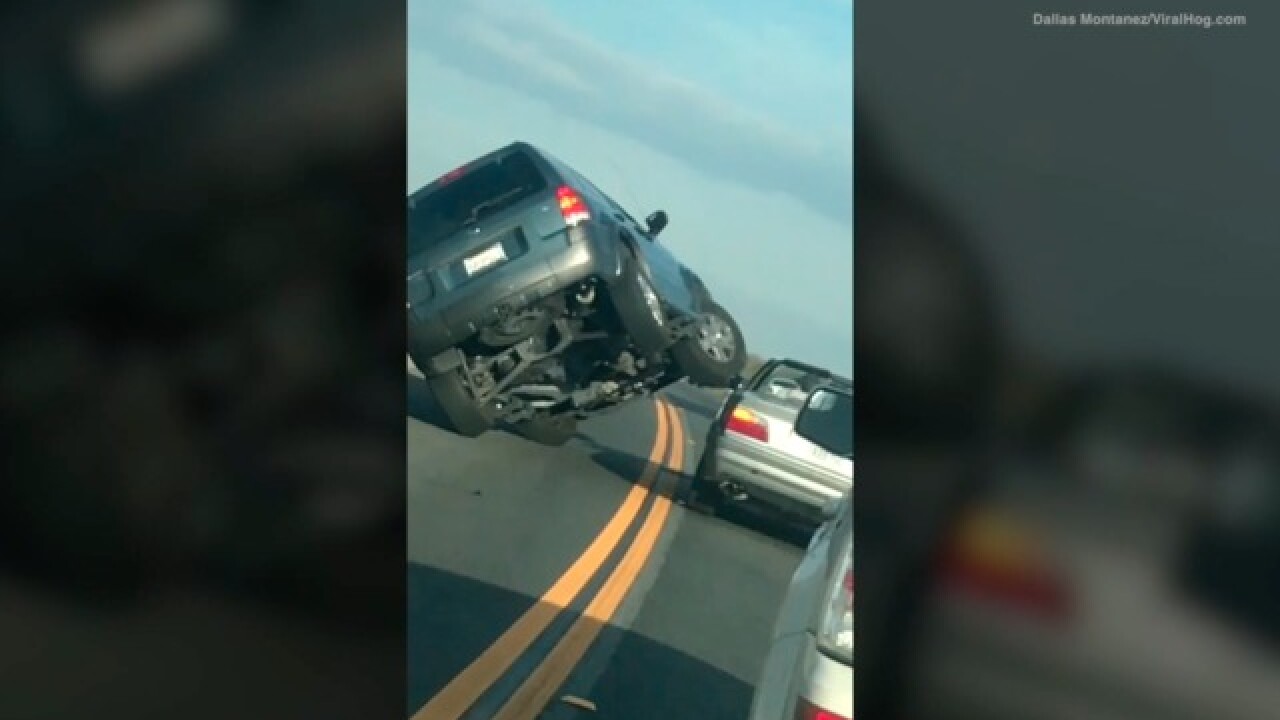 SAN DIEGO (KGTV) - One driver was arrested after video of a road rage incident in Oceanside made its way into CHP's hands.

Two drivers, one in a gray Ford Explorer and the other in a gray BMW convertible, were involved in the February 15 incident on eastbound State Route 78 in Oceanside, according to California Highway Patrol officers.

Officers responded to a report of a non-injury, hit-and-run collision just before 4:30 p.m. near the College Blvd. exit. Officers arrived and found the Explorer on its side on the center median while the BMW reportedly fled.

While investigating, officers were made aware of a video recorded by a witness.

Officers said McCall spit at Branch before returning to his BMW. Branch is then seen driving into the center median and accelerating into the BMW, narrowly missing McCall.

Sideswiping the BMW caused the Explorer to overturn onto its side. McCall then drove away, officers said.

The person who recorded the now-viral video was in disbelief:

"First I was recording just because he was swerving into the left lane. But as you can see it did take a crazy turn. I cannot believe I witnessed such a crazy accident. Just because he was mad he wasn’t able to cut someone off. After the incident, the convertible man took off about 15-20 feet, then parked, and decided to walk back. I was so scared and nervous, I drove off as safely as I could."

Investigators were able to track down McCall at his home late Thursday. Officers said misdemeanor charges will be filed with the District Attorney.

Branch was re-contacted after officers viewed the video and arrested on felony assault charges.

10News went to Branch's house to talk to him but no one answered. A few hours later, his father called to say Branch never intended to hurt anyone, but instead was scared and trying to get away from McCall, the driver of the BMW. He said his son is a hard worker and it was an accident.

10News also went to McCall's house, but a roommate answered the door and said "no comment" since it was a legal matter.

CHP said anyone who witnesses aggressive driving and highway violence to call 911 and report the behavior.

"There's no place for this on our freeways," said Officer Latulippe. "They're extremely lucky they were not injured, the people around them were not injured. They could have been. We can't do this in our vehicles. A vehicle is, can be a weapon."