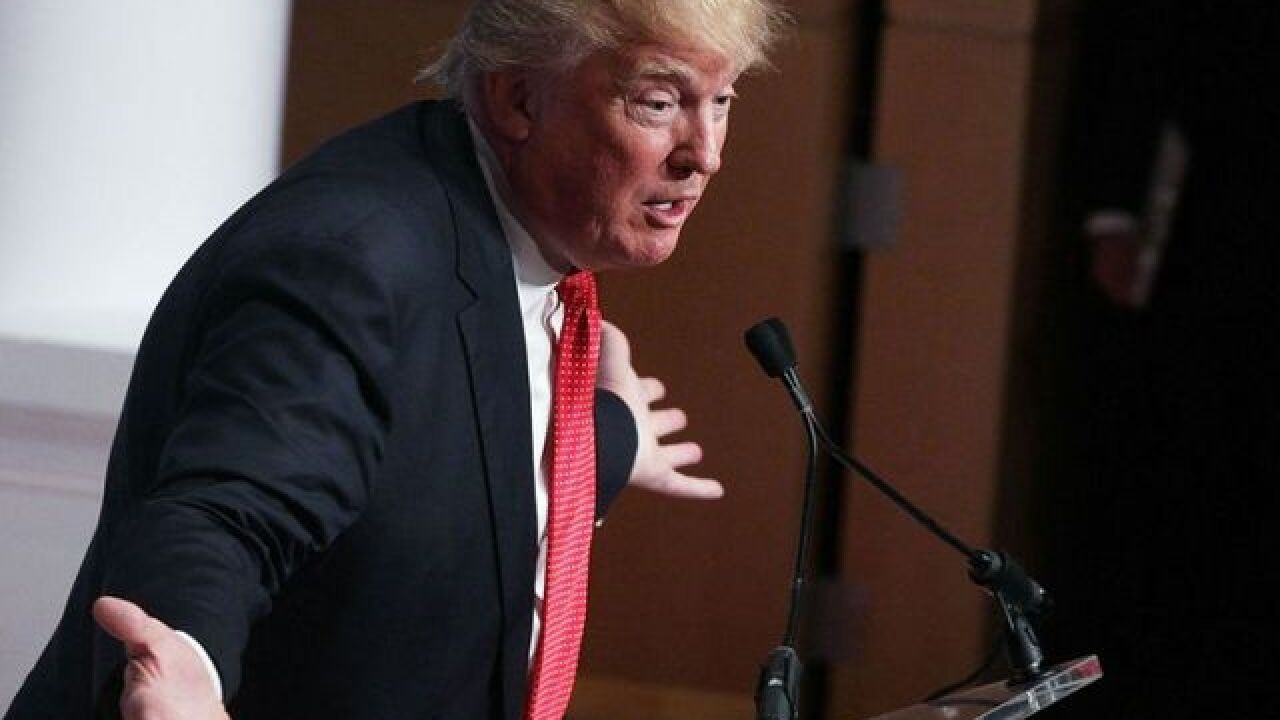 MOUNT PLEASANT, S.C. (AP) — Donald Trump on Tuesday stood by his call to block all Muslims from entering the United States, even as the idea was widely condemned by rival Republican presidential candidates, party leaders and others as un-American.

Trump defended his plan for a "total and complete shutdown of Muslims entering the United States" by comparing it with President Franklin Roosevelt's decision to inter Japanese Americans during World War II.

"This is a president who was highly respected by all," Trump said Tuesday. "If you look at what he was doing, it was far worse."

The idea announced by Trump Monday evening drew swift rebukes, some from abroad. British Prime Minister David Cameron slammed it as "divisive, unhelpful and quite simply wrong." Muslims in the United States and around the world denounced it unconstitutional or offensive.

The front page of the Philadelphia Daily News pictured Trump holding his right hand out as if in a Nazi salute with the headline "The New Furor." In morning TV interviews Tuesday on ABC and CNN, Trump was asked about being compared to Hitler.

The candidate didn't back down, saying that banning all Muslims "until our country's representatives can figure out what the hell is going on" is warranted after attacks by Muslim extremists in Paris and last week's shooting in San Bernardino, California, that killed 14.

"We are now at war," Trump said, adding: "We have a president who doesn't want to say that."

Trump's proposed ban would apply to immigrants and visitors alike, a sweeping prohibition affecting all adherents of a religion practiced by more than a billion people worldwide.

Trump announced his plan to cheers and applause at a Monday evening rally in South Carolina.

"Until we are able to determine and understand this problem and the dangerous threat it poses, our country cannot be the victims of horrendous attacks by people that believe only in jihad, and have no sense of reason or respect for human life," Trump said in a written statement.

At the rally he warned that without drastic action, "it's going to get worse and worse, you're going to have more World Trade Centers."

Rod Weader, a 68-year-old real estate agent from North Charleston who attended the rally and said he agreed with Trump's plan "150 percent."

"As he says, we have to find out who they are and why they are here," he said.

Since the Nov. 13 attacks in Paris that killed 130 people and wounded hundreds more, a number of Republican presidential contenders have proposed restrictions on Syrian refugees — with several suggesting preference for Christians seeking asylum — and tighter surveillance in the U.S.

But Trump's proposed ban goes much further, and his Republican rivals were quick to reject the latest provocation from a candidate who has delivered no shortage of them. "Donald Trump is unhinged," Jeb Bush said via Twitter. "His 'policy' proposals are not serious."

John Kasich slammed Trump's "outrageous divisiveness," while a more measured Ted Cruz, who has always been cautious about upsetting Trump's supporters, said, "Well, that is not my policy."

Trump's plan also drew criticism from the heads of the Republican Party in Iowa, New Hampshire and South Carolina, the first three states to vote in next year's presidential primaries.

"It is un-Republican. It is unconstitutional. And it is un-American," said Jennifer Horn, chairwoman of the Republican Party of New Hampshire.

In an interview on Fox News, Trump said Muslim members of the U.S. armed forces would "come home" and that his plan would "not apply to people living in the country."

In the late 1800s, Congress passed legislation broadly aimed at halting Chinese immigration. But, said Leti Volpp, a University of California expert on immigration law, "there is no precedent for a religious litmus test for admitting immigrants into the United States."

"Excluding almost a quarter of the world's population from setting foot in the United States based solely upon their religious identity would never pass constitutional muster," Volpp said.

Trump's proposal came a day after President Barack Obama spoke to the nation from the Oval Office about the shootings in San Bernardino, California, which Obama said was "an act of terrorism designed to kill innocent people."

The FBI said Monday the Muslim couple who carried out the massacre had been radicalized and had taken target practice at area gun ranges, in one case within days of the attack last week that killed 14 people.

Trump's campaign has been marked by a pattern of inflammatory statements, dating back to his harsh rhetoric about Mexican immigrants. He has taken a particularly hard line against Muslims in the days since the Paris attacks, advocating enhanced surveillance of mosques due to fears over radicalization.

"Donald Trump sounds more like a leader of a lynch mob than a great nation like ours," said Nihad Awad, national executive director of the Council on American-Islamic Relations. "He and others are playing into the hands of ISIS. This is exactly what ISIS wants from Americans: to turn against each other."