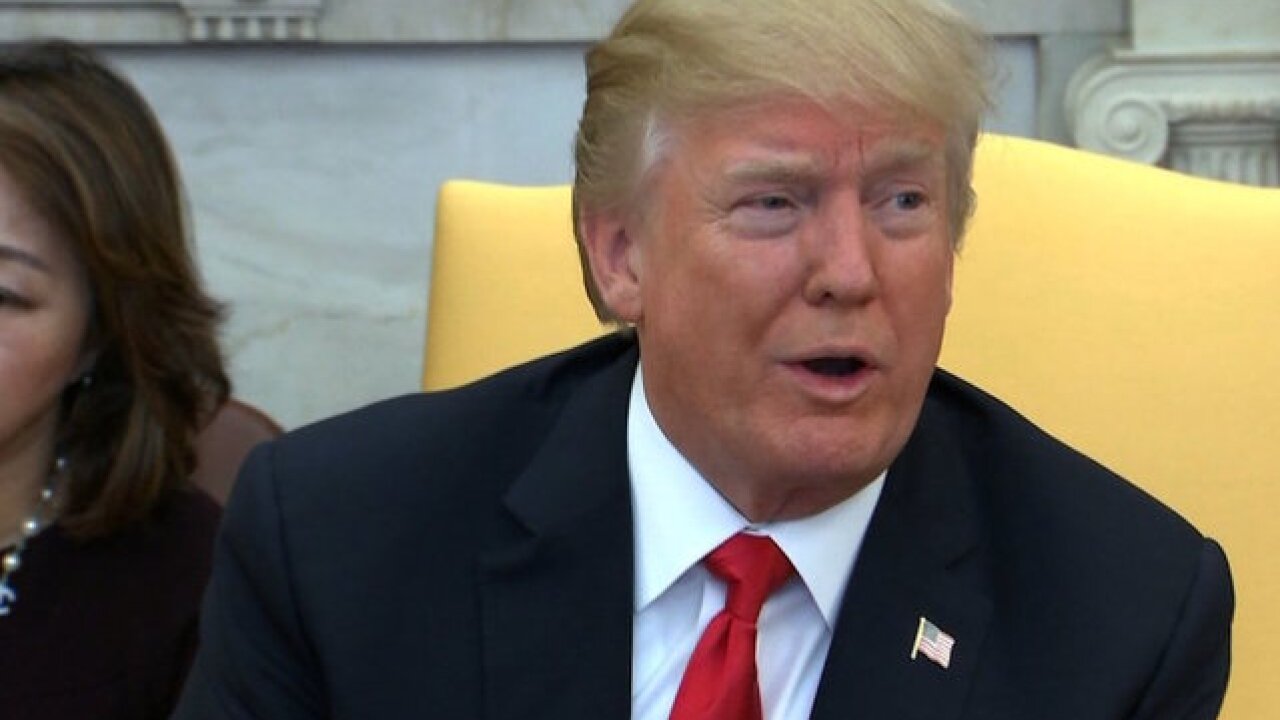 © 2018 Cable News Network, Inc.
Pool
<p>President Donald Trump has authorized the release of a controversial Republican memo, and has sent word to the House Intelligence Committee the document may be made public, a White House official said.</p>

(CNN) -- House Republicans, with the approval of President Donald Trump, on Friday released a disputed GOP intelligence memo that alleges FBI abuses of its surveillance authority.

The highly controversial memo from the GOP and Rep. Devin Nunes alleges that then-Deputy FBI Director Andrew McCabe told the House Intelligence Committee that no surveillance warrant would have been sought for a Trump campaign aide without a disputed opposition research dossier on Trump and Russia.

The memo is the most explicit Republican effort yet to discredit the FBI's investigation into Trump and Russia, alleging that the investigation was infused with an anti-Trump bias under the Obama administration and supported with political opposition research.

The release threatens to further fracture the frayed relationship between the President and his Justice Department and intelligence community, both of which opposed the release of the document, which is based on classified intelligence. The FBI issued a rare public warning on Wednesday that the memo omits key information that could impact its veracity. The release also raises the question of whether Trump will seek to dismiss his deputy attorney general, Rod Rosenstein, who appointed special counsel Robert Mueller.

Even if the dossier was used as part of the application, a FISA renewal indicates that a judge was convinced that the surveillance was yielding information about the target acting as an agent of a foreign power that merited continued monitoring.

The memo alleges that Steele had an anti-Trump financial and ideological motivations that were not included in the FISA application. Senior DOJ officials knew about ex-British intelligence agent Christopher Steele's anti-Trump bias, according to the memo.

The memo alleges that the FISA application cited a September 2016 Yahoo News article on Page's July 2016 trip to Moscow, but the application "incorrectly assesses that Steele did not provide information to Yahoo News."

"The article does not corroborate the Steele dossier because it is derived from information leaked by Steele himself to Yahoo news," the memo states.

But the memo then goes on to say that the FBI did not know about Steele's media contacts, alleging Steele "improperly concealed and lied" to the FBI about his media contacts.

Rep. Adam Schiff of California, the top Democrat on the House Intelligence Committee, however, said that the Yahoo News article was not referenced in the FISA application to corroborate Steele.

But the memo also states that Rosenstein -- who was elevated under Trump -- signed off on at least one FISA application for Page. Rosenstein's role in renewing the FISA warrants has sparked Trump's ire. Dana Boente -- who is currently the FBI general counsel and was appointed by Trump's FBI director -- signed off as well on one or more of the applications.

Democrats dispute memo's findings
Democrats have slammed the Republican memo as misleading and inaccurate. Schiff called the memo "a shameful effort to discredit" the FBI and Justice Department and an attempt to undermine Mueller's probe.

"The Republican document mischaracterizes highly sensitive classified information that few members of Congress have seen, and which Chairman Nunes himself chose not to review," Schiff said. "It fails to provide vital context and information contained in DOJ's FISA application and renewals, and ignores why and how the FBI initiated, and the special counsel has continued, its counterintelligence investigation into Russia's election interference and links to the Trump campaign."

But Nunes said in a statement that committee had "discovered serious violations of the public trust, and the American people have a right to know when officials in crucial institutions are abusing their authority for political purposes."

That’s it? Dishonest and misleading memo wrecked the House intel committee, destroyed trust with Intelligence Community, damaged relationship with FISA court, and inexcusably exposed classified investigation of an American citizen. For what? DOJ & FBI must keep doing their jobs.

"It is my hope that the committee's actions will shine a light on this alarming series of events so we can make reforms that allow the American people to have full faith and confidence in their governing institutions," Nunes said.

Trump says memo a 'disgrace'
White House spokesman Raj Shah said that prior to the memo's release, it had previously been transmitted to the minority and majority members in the House Intelligence Committee. The document was also sent to House Speaker Paul Ryan's office, Shah said.

Speaking in the Oval Office, Trump implied the memo revealed political bias at the FBI. He said he believed the purported bias was a "disgrace" and said certain people should be "ashamed of themselves."

Asked in the Oval Office on Friday whether he retained confidence in Rosenstein or if he planned to fire him, Trump demurred.

"You figure that one out," Trump said.

Escalation of partisan fight over Russia probe
The extraordinary decision to release the classified four-page memo with a never-before-used House Intelligence Committee rule escalates the partisan fight over the investigations into Russian election meddling and possible collusion. This will likely have major repercussions for the relationship between the Justice Department and Capitol Hill.

The memo, spearheaded by Nunes, the chairman of the House Intelligence Committee, alleges that the FBI used the opposition research dossier on Trump and Russia written by Steele to secure a FISA surveillance warrant on Page without disclosing that the dossier was funded in part by Democratic sources.

In a statement earlier this week, Nunes said, "It's clear that top officials used unverified information in a court document to fuel a counter-intelligence investigation during an American political campaign."

The dossier alleges that Page met senior Russian officials as an emissary of the Trump campaign and discussed quid-pro-quo deals relating to sanctions, business opportunities and Russia's interference in the election. After Page took a trip to Russia in July 2016, the FBI grew concerned that he had been compromised by Russian operatives, US officials briefed on the matter told CNN.

Page says he never cut any political deals with the Kremlin and says there was nothing illegal in his interactions with Russian officials.

Democrats have dismissed the memo as a "profoundly misleading" Republican document that's intended to undermine Mueller's investigation by targeting Rosenstein and McCabe, who stepped down earlier this week.

The release comes despite a lobbying effort from senior officials at the FBI and Justice Department , who argued that the memo contained inaccuracies.