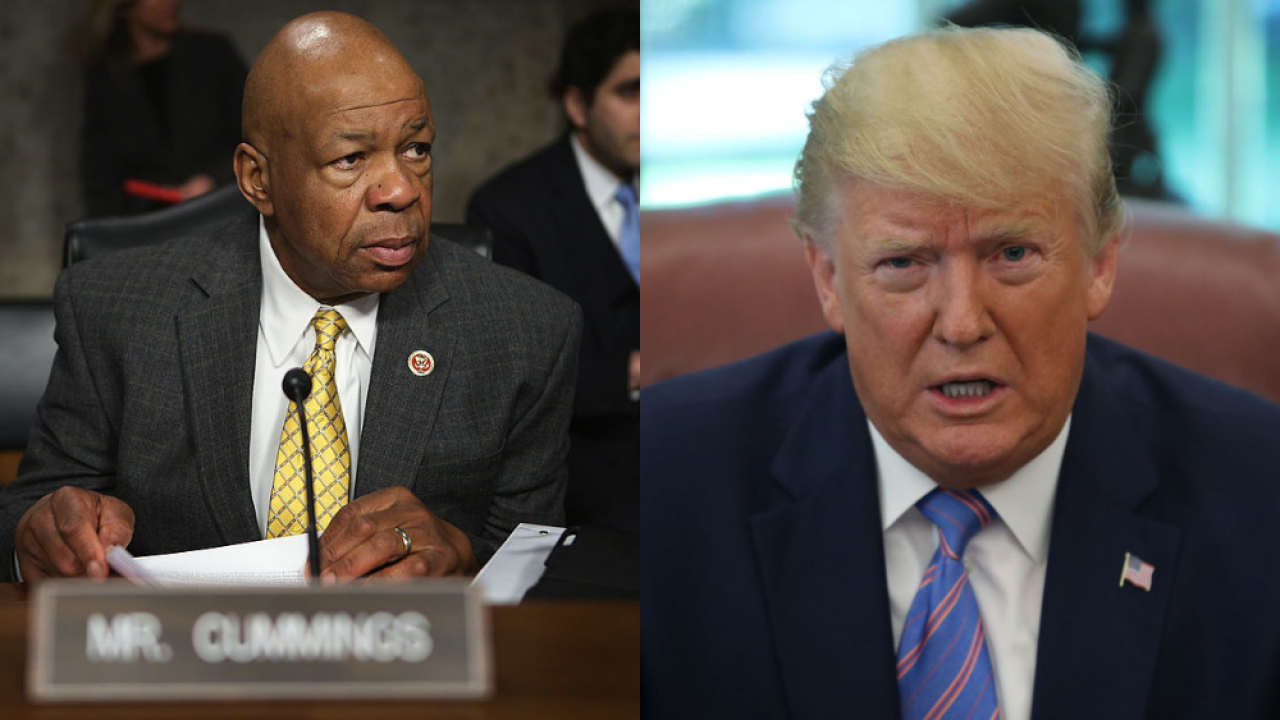 President Donald Trump appeared to sarcastically call out a break-in at Rep. Elijah Cummings' Baltimore home after a week of attacking the prominent African American lawmaker over the conditions of his Baltimore district - even comparing the city's murder rate to third world countries.

"Really bad news! The Baltimore house of Elijah Cummings was robbed. Too bad!" the President tweeted on Friday.

CNN reached out to the White House for comment but did not receive an immediate response.

The Baltimore Police Department said Thursday it is investigating a report of a burglary that reportedly occurred at the Maryland congressman's home shortly before 4 a.m. ET on Saturday — hours before Trump first tweeted criticism about Cummings and his home city.

It is currently unknown if any property was taken from the home, the BPD said.

On Saturday, Trump attacked Cummings, the chair of the House Oversight Committee, as a "bully" and slammed Baltimore, as a "disgusting, rat and rodent infested mess," suggesting that "no human being would want to live there."

At a rally in Cincinnati Thursday night, Trump claimed Baltimore's homicide rate is higher than in countries like El Salvador, Guatemala and Honduras. Continuing his remarks on Baltimore, Trump compared the homicide rate to that of Afghanistan, where tens of thousands of people have been killed over the course of the US war there. "I believe it's higher than -- give me a place that you think is pretty bad," Trump said to a member of the crowd. "The guy says Afghanistan. I believe it's higher than Afghanistan."

Trump's tirade against Cummings is the latest verbal assault against a minority member of Congress who is a frequent critic of the President. Last month, Trump -- in racist language that was later condemned by a House resolution -- told four progressive Democratic congresswomen of color to "go back and help fix the totally broken and crime infested places from which they came." Three of the four were born in the US, and the fourth is a naturalized US citizen.

Responding to some of the President's tweets over the weekend -- in which Trump suggested the congressman needed to spend more time fixing his district -- Cummings said on Twitter: "Mr. President, I go home to my district daily. Each morning, I wake up, and I go and fight for my neighbors. It is my constitutional duty to conduct oversight of the Executive Branch. But, it is my moral duty to fight for my constituents."

Cummings has spent decades fighting for the city that is home to his district. It's also the same municipality in which Cummings was born and raised -- and a fundamental part of his story. The son of former sharecroppers, Cummings was born in 1951 and graduated from Baltimore City College High School in 1969.

Cummings grew up in the Civil Rights era and recently discussed how, even at a young age, he was part of that movement to integrate parts of his neighborhood.

"We were trying to integrate an Olympic-size pool near my house, and we had been constrained to a wading pool in the black community," Cummings told ABC's "This Week" earlier this month. "As we tried to March to that pool over six days, I was beaten, all kinds of rocks and bottles thrown at me."

The Maryland Democrat said Trump's racist remarks regarding four other members of Congress echoed the same insults he heard as a 12-year-old boy in 1962, which he said were "very painful."

"The interesting thing is that I heard the same chants. 'Go home. You don't belong here,'" he told ABC News' George Stephanopoulos. "And they called us the N-word over and over again."