PlatesMania.com license plate generator
Here are some of the personalized license plates the Indiana Bureau of Motor Vehicles has rejected in 2020.
By: WRTV Staff
Posted at 12:11 PM, Sep 04, 2020

INDIANAPOLIS — You can give someone the "MIDLFNGR" on I-465 in the middle of Indiana, but that doesn't mean you can have it written on your license plate.

The Indiana Bureau of Motor Vehicles has rejected at least 318 personalized license plate requests in 2020 that were determined to be too "D1RTY" for the road. The list of rejects, which WRTV acquired through an information request with the BMV, range from wildly profane to sexually explicit to politically motivated to complete gibberish.

One person decided to be a "SMRTA55," while others wondered "WTF 2020" and cursed "COV1D19." A few submissions came from spirited Purdue fans who wanted to tell other drivers it's time to "BTFU" (Boiler The F**k Up). 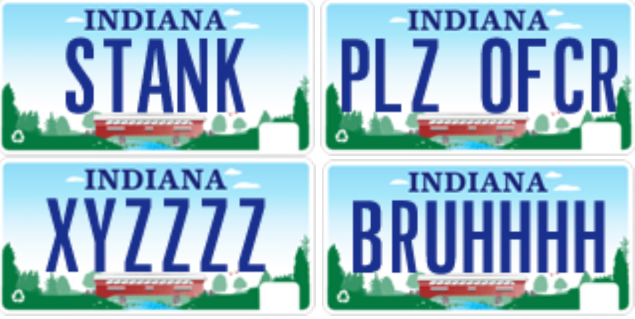 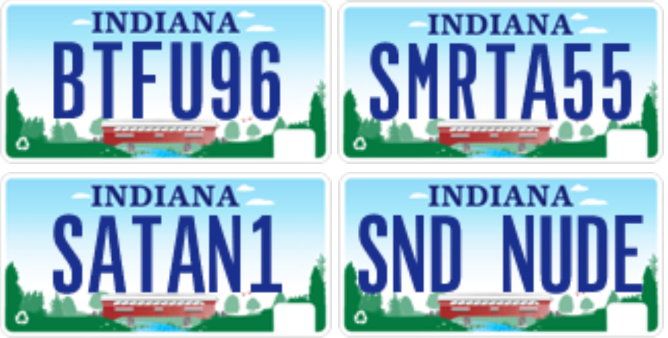 Many of the puns referred to, well, let's just say bodily functions and anatomy. And at least half simply were not suitable to be printed on a family-friendly news website, such as the one you're reading now, so you will have to use your imagination. We're "SRRY."

According to the BMV, personalized license plates can only contain a combination of numbers and letters. Special characters are not allowed. (The person who submitted "F*NITUP" should have read the instructions.)

The BMV can refuse a personal license plate if it contains a combination of letters or numbers that "carries a meaning or connotation offensive to good taste and decency," "would be misleading" or that "the BMV otherwise considers improper for issuance." (Better luck next time, "B4D 4SS.")
People whose vanity plates are denied can register a standard plate and have the personalized license plate fee refunded. (Yes, someone actually paid an extra $45 in a failed attempt to have "POOOPS" put on their car.)

The moral of the story is, if the BMV rejects your plate idea, it's not that they're not saying "WEHATEU." They just think it's a little too "SL34ZY" and you should "TRYHRDR."

This story originally reported by Daniel Bradley on wrtv.com.