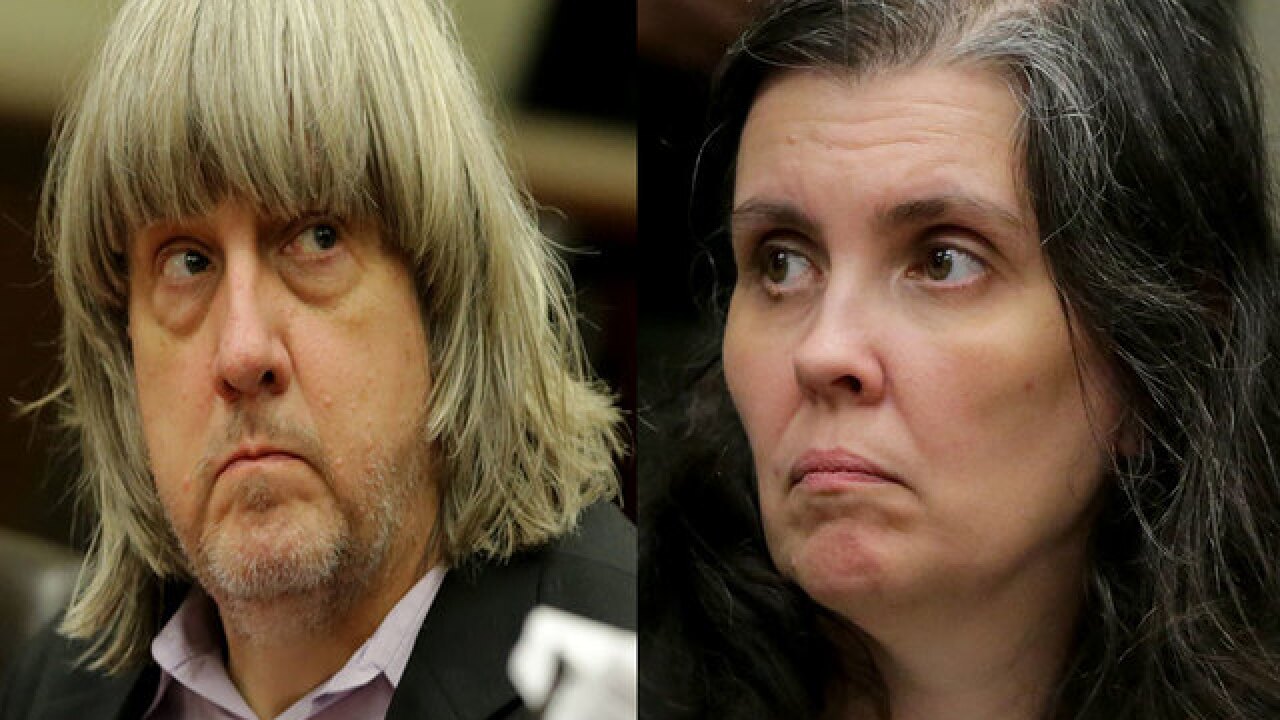 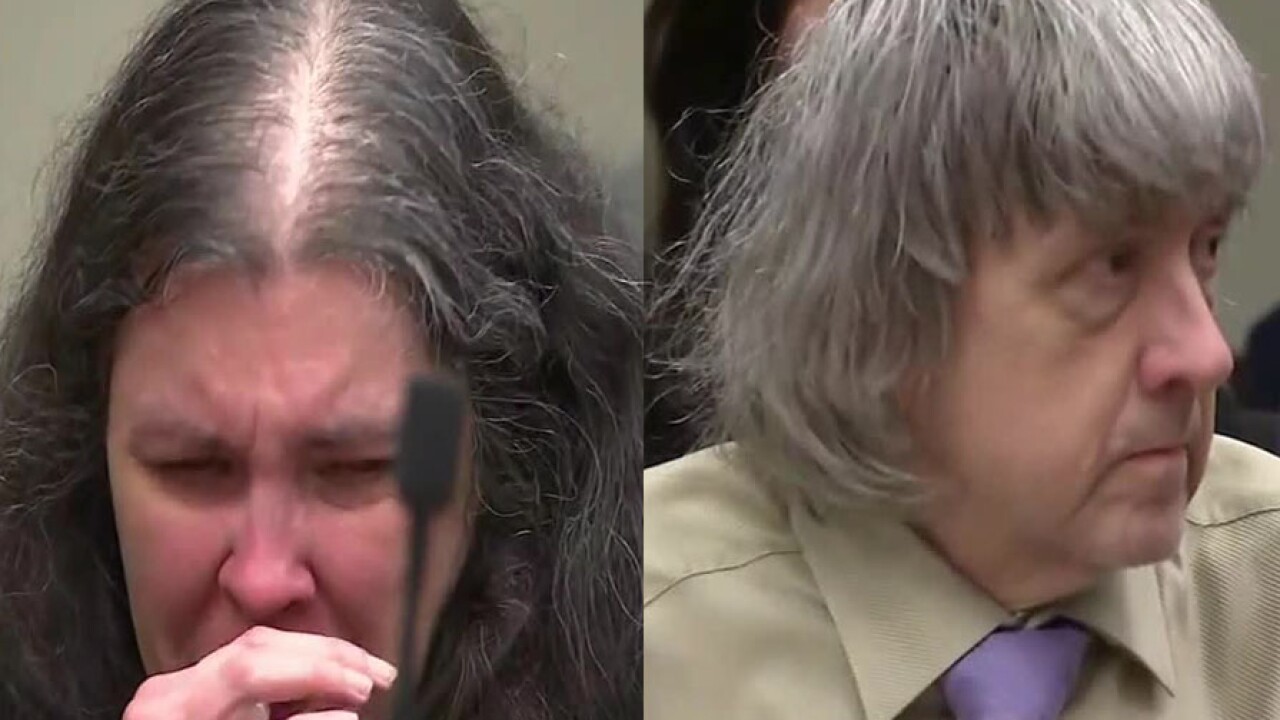 LOS ANGELES (AP) - A Riverside County couple who inflicted years of torture and abuse on 12 of their 13 children and were only discovered when one of their daughters fled their Perris home and pleaded for help to a 911 operator were sentenced to life in prison Friday, with parole possible after 25 years.

The sentencing of David and Louise Turpin was preceded by the first public statements from some of the children, who alternately spoke of love for their parents, and of what they had suffered despite it, as the couple wiped away tears.

The Turpins pleaded guilty in February to neglect and abuse.

"I'm sorry for everything I've done to hurt my children. I love my children so much," Louise Turpin said.

None of the children were publicly identified.

One of the adult children walked into court already in tears just after the hearing began, holding hands with a prosecutor.

A daughter said, "Life may have been bad but it made me strong. I fought to become the person that I am. I saw my dad change my mom. They almost changed me, but I realized what was happening. ... I'm a fighter, I'm strong and I'm shooting through life like a rocket."

Some of the others said they still love their parents. One asked for a lighter sentence because "they believed everything they did was to protect us."

The horrors within the home were concealed behind a veneer of suburban normalcy in a middle-class section of Perris, a small city about 60 miles southeast of Los Angeles.

The residence was neatly kept and neighbors rarely saw the kids outside, but nothing triggered suspicion.

David Turpin, 57, had been an engineer for Lockheed Martin and Northrop Grumman. Louise Turpin, 50, was listed as a housewife in a 2011 bankruptcy filing.

But the children's desperate plight became public after a teenage daughter escaped from the filthy home by jumping from a window, then used a cellphone to contact a police dispatcher and begin describing years of horrific abuse.

When deputies arrived, they were shocked by what they discovered. A 22-year-old son was chained to a bed and two girls had just been set free from their shackles. The house was covered in filth and the stench of human waste was overwhelming.

Children said they were beaten, caged and shackled to beds if they didn't obey their parents.

Judge Bernard Schwartz said the children were not allowed to be filmed or photographed.

Most of the 13 children -- who ranged in age from 2 to 29 -- were severely underweight and hadn't bathed for months.

The desperate cry for help from the 17-year-old came after a lifetime of living in such isolation, the girl didn't know her address, the month of the year or what the word "medication" meant.

But she knew enough to punch the digits 9-1-1 into a barely workable cellphone and then began describing years of horrific abuse to a police dispatcher.

Deputies testified that the children said they were only allowed to shower once a year. They were mainly kept in their rooms except for meals, which had been reduced from three to one per day, a combination of lunch and dinner. The 17-year-old complained that she could no longer stomach peanut butter sandwiches -- they made her gag.

The children weren't allowed to play like normal children. Other than an occasional family trip to Las Vegas or Disneyland, which one of the daughters mentioned at Friday's hearing, they rarely left the home. They slept during the day and were active a few hours at night.

Although the couple filed paperwork with the state to homeschool their children, learning was limited. The oldest daughter only completed third grade.

"We don't really do school. I haven't finished first grade," the 17-year-old said, according to Deputy Manuel Campos.

The children said they were beaten, caged and shackled to beds if they didn't obey their parents.

Investigators found that the toddler had not been abused, but all of the children were hospitalized after they were discovered.