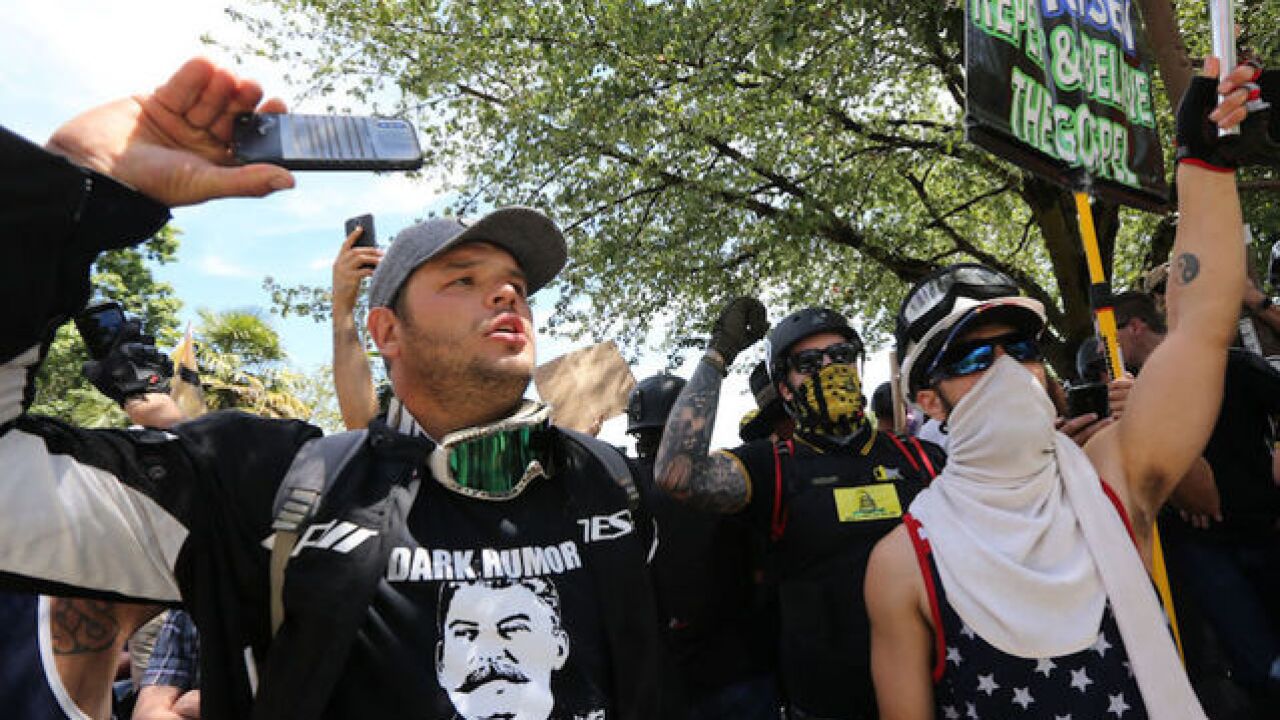 Image copyright 2018 Getty Images. All rights reserved. This material may not be published, broadcast, rewritten, or redistributed.
Karen Ducey
<p>Right-wing demonstrators hold a rally supporting gun rights and free speech on August 4, 2018 in Portland, Oregon. The rally was organized by the group Patriot Prayer, also attended by the affiliated group Proud Boys, which drew counter protesters and members of the anti-fascist group Antifa. </p>

Police in tense downtown Portland on Saturday ordered protesters to disperse and leave a location where they saw people throwing projectiles, including rocks and bottles.

This came as dueling political rallies took place and police braced for potential violence. They told people not to bring weapons and warned that checkpoints and bomb-sniffing dogs would be on hand.

Members of law enforcement -- who wore heavy armor on the streets -- ran toward protesters and continued to move them farther away from the location where flash-bang grenades were deployed, a CNN affiliate live signal from the ground shows.

The group Patriot Prayer USA reportedly planned to hold a rally that drew opposition. Large groups of protesters and counterprotesters gathered on opposite sides of a downtown street, waving signs and banners. People on both sides hurled insults at each other.

Demonstrators on one side chanted "USA! USA!" and said the Pledge of Allegiance, while the other side countered with a chant that included the line "fascists retreat."

"There will be a significant law enforcement presence in the area of the demonstration due to past threats and acts of violence," an online statement from the Portland Police Bureau said earlier. "Persons attending any of the events should not bring any weapons or items that can be used as weapons to any of the events."

Lines of Portland police wearing protective helmets and vests kept the two sides separated. When members of both groups began marching, police used loudspeakers to order people to stay off the streets and on sidewalks. The rallies and marches were taking place downtown and in Tom McCall Waterfront Park.

Although the sides were separated, a live video feed from CNN affiliate KOIN showed that some people managed to mingle with their opponents and attempt conversations on topics such as immigration, free speech and patriotism. Most of the discussions appeared tense or heated, but there was no violence.

The organizer of Patriot Prayer, Joey Gibson, has described his ideology as libertarian, not alt-right. The two sides have clashed before in Portland, known for its strongly liberal politics.

Four people were arrested in early June when Patriot Prayer held a "Freedom March" downtown and a counterrally was held in the same area. The competing demonstrations escalated into fights and people throwing fireworks, rocks and bottles at each other.

More than a dozen people were arrested during dueling protests in June 2017, when hundreds of supporters of President Donald Trump converged downtown for an event billed as a "Trump Free Speech" rally. They were opposed by a mixed group of counterprotesters who viewed the rally as an implicit endorsement of racism, given its close timing to a racially charged stabbing in Portland the prior month.

Gibson told CNN at the time that the rally was planned before the stabbings and his group had nothing to with the suspect in the killings.

Only weeks before the rally, two men were killed as they tried to defend two Muslim women from what police described as a barrage of hate speech. A suspect was arrested and faces trial.