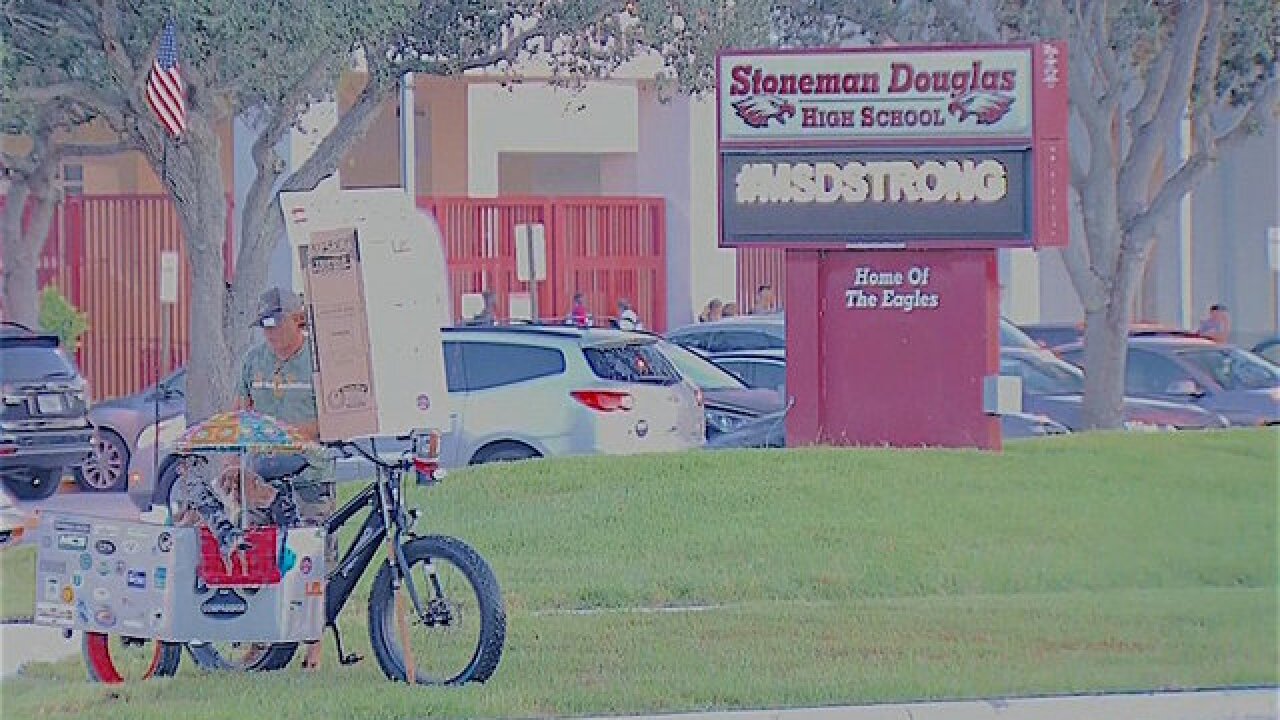 If Marjory Stoneman Douglas High School were like any other school, you wouldn't think much of the freshly-painted burgundy hallways or the newly-installed 20-foot tall fences around the freshman building.

If this were a normal student body, the eyes of the nation wouldn't be trained on their every move, and their summer break stories wouldn't include a tally of rallies, summits, nationwide tours and TV appearances.

In any other place, in any other new school year, things would be as they were.

But when your school is also the site of one of the deadliest school shootings in American history, nothing is ever really normal.

Those fences, covered with "MSD Strong" and "Parkland Strong" banners, surround the shuttered building where a former student opened fire almost exactly six months ago. Those hallways are the same ones students rushed through on Valentine's Day as the gunshots rang out across campus.

There are other changes, too.

The school's swimming coach is now the athletic director, because the former AD was among those killed that day. There are now two principals at MSD, because the basic demands of running a school are now joined by the demands of managing a community in crisis.

It's the little things like this; a change in paint color or a change in command, that reverberate outward like strange ripples, hinting at something bigger under the surface.

"We're going into it [the school year]," says English teacher Darren Levine, "knowing it will be a year unlike any other."

Small reminders linger in the ordinary

To Levine, the school itself doesn't appear all that different from when classes let out in the spring. There are some new gates at certain entry points, a smattering of new portable classrooms; nothing too out of the ordinary.

But what the bland classrooms don't immediately signify is that they are there to handle the overflow caused by the vacancy of building 12, where most of the victims were shot. It's not clear what will happen to the building, but the feeling around the community is that it'll eventually be torn down. Until then, it stands there like a mausoleum, empty and silent.

"I'm going into the year anticipating hardship, which is never a good lingering feeling," Levine says. "I'm psyched to get in there with the kids and move through the year in a way that will strengthen us all, but there's a bad feeling involved with being there."

If Marjory Stoneman Douglas High School were like any other school, the collective nerves of returning students and staff would be predictable responses to a new year, not the complex expectations and questions of survivors returning to a crime scene.

Kai Koerber is one of the roughly 3,100 MSD students returning to school today. As a rising senior, he's looking forward to digging into AP Calculus classes and hopefully, somehow, enjoying the life of a regular high school student. He has high hopes that, while nothing can really be normal again, he and his fellow students will find some optimism.

"I think it was a strange feeling for everyone to come back [to the school after the summer]," he says. "But I also think that everyone, having seen the changes that have taken place since February 14th, has a renewed sense of hope for a better future and a better world."

Koerber is dismayed that the school decided not to install metal detectors, one of several proposed security measures considered over the summer. Ultimately, the school shelved the idea until it could train staff on how to properly use them.

It also discontinued the requirement of clear backpacks; a measure from last school year that prompted privacy concerns and dark-humored ridicule.

However, students will notice other changes. There are 52 new security cameras on campus, a new intercom system, and new door lock systems and four additional security personnel.

"All of these additions to our campus, although necessary, continuously serve as a reminder of the tragedy that happened at MSD," Kai says.

If Marjory Stoneman Douglas High School were like any other school, its students and staff wouldn't be balancing their academic lives with the public ones they never asked for. But the day 19-year-old Nikolas Cruz barged into his former school with a Smith & Wesson M&P 15, they were pulled through a prism of identities: They became survivors, advocates, activists, leaders, mourners, celebrities, political figures and pariahs.

Seventeen became victims, whose memories serve as the bedrock of so many movements of love and change.

Looming over all of this, the school and the community of Parkland have become icons of the complex problem of gun violence in America.

It's a lot to shoulder, but that's what happens when a normal school is shaken by such a deeply abnormal act.

Some students are hoping a new school year will bring some much-needed balance. For many others returning to MSD, a public life of activism and leadership is now business as usual.

Over the summer, Koerber attended a leadership summit in New Zealand, spoke at a Business Insider panel in Cannes and interned in Washington, DC with his congressman, Ted Deutch.

Kyle Kashuv, another MSD survivor and rising senior, met with President Donald Trump over the summer and has become a regular commentator on conservative media outlets.

And of course, some of MSD's most visible activists; the David Hogg and Emma Gonzalez, have graduated and are now quasi-celebrities in their own right.

For students like Koerber and Kashuv, who are trying to balance their lives as both students and newly minted agents of change, the constant attention is a price they are willing to pay for the cause.

"I believe that the way we all get through this is by not letting it become who we are," Koerber says. "In our case, tragedy will not stand in the way of triumph."

If Marjory Stoneman Douglas High School were like any other school, the upcoming Broward County school board elections would be another unremarkable piece of local politics.

Instead, they will be a referendum, a moment of truth for a community still reeling with grief and anger. Mourning parents have taken up the political mantle here, hungry for accountability from officials they say failed the students of MSD.

Stand with Parkland, a group formed by families of the victims, condemned the Broward County School Board earlier this month, saying the board was indecisive in implementing security measures and in following up on independent investigations.

On August 28, five of the nine embattled members of the Broward County School Board are up for re-election. Among those looking to take their seats are Lori Alhadeff and Ryan Petty. Alhadeff's daughter Alyssa and Petty's daughter Alaina were both killed in the Parkland shooting.

"February 14th changed my world and opened my eyes to the impact school district policies have on the safety and security of our students," Petty told the Orlando Sun-Sentinel of his campaign.

The truth is, the shooting didn't just change the worlds of MSD students or their families that day. It changed everything around them. The ripples it set off have become waves, far across the country and as close as the nearest Parkland voting booth.

As the school years go by, everyday details of hallways and fences and coaches and classes will fade back into a comforting monotony.

But Marjory Stoneman Douglas High School isn't like every other school. And as long as what happened there continues to matter, it never will be.