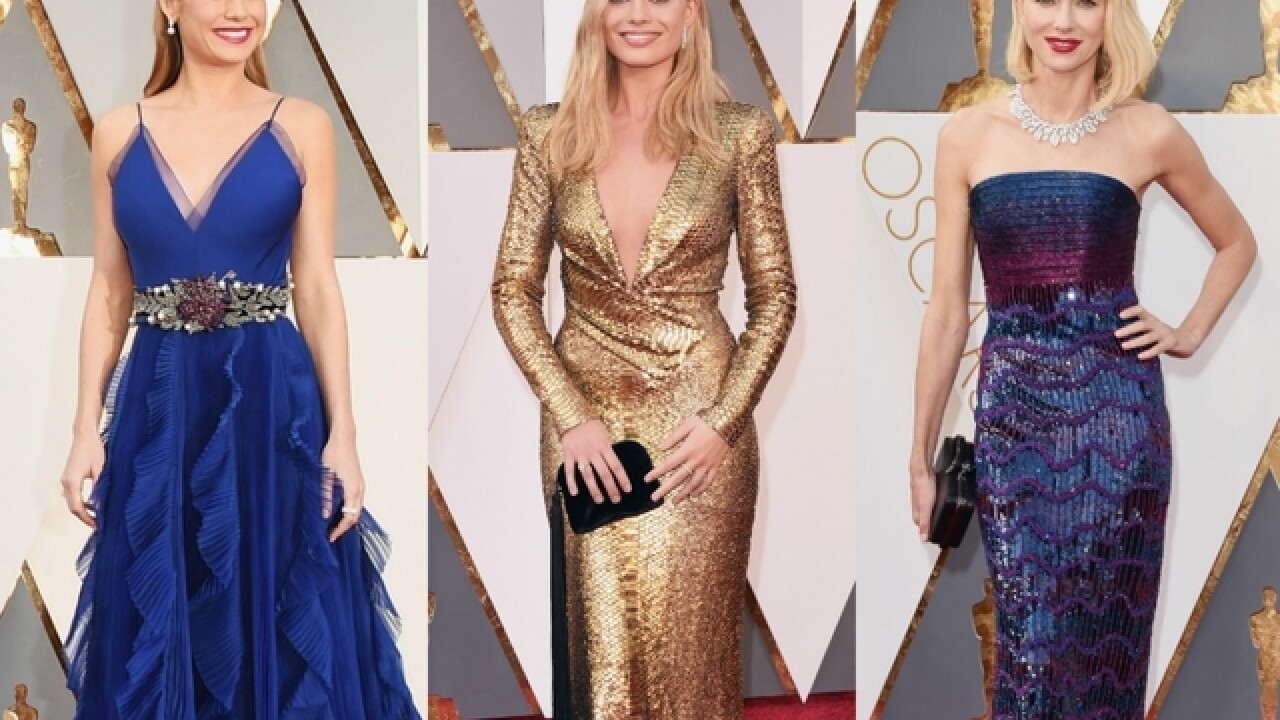 Alicia Vikander set the tone on the Oscars red carpet Sunday as she walked early in a pale yellow custom Louis Vuitton gown, her hair flowing down her back.
The Swedish actress has become an "it" girl for glam and didn't disappoint this time around in the strapless princess gown with a balloon hem that was higher in the front. Like her hemline, her hair was also high-low, fastened into a half-bun that showed off her chandelier earrings.
"I love the color," she said from the Dolby Theatre in Los Angeles.
Brie Larson, another of the new "it" carpet ladies, wore a blue ruffled Gucci with a silvery belt and columns of loose ruffles.
"We've got the super high glamour sequin moments and then superbly sweet ruffles," said Avril Graham, executive fashion and beauty editor for Harper's Bazaar.
Among the sweet moments for Graham was Vikander in her girly yellow, and among her bombshell moments: Margot Robbie in "va voom gold chic."
Graham attributed the success of Robbie's tight, long-sleeve look to her "natural Aussie beauty" and understated hair and makeup.
Marchesa and Lorraine Schwartz were the carpet's annual bombshell Sofia Vergara's best friends. She wore a deep blue strapless from Marchesa and Schwartz diamond earrings that burst like fireworks, her hair swept back, further showing off her tight-waisted look.
Mindy Kaling was in a sleek black crepe gown from Elizabeth Kennedy with a huge violet-blue silk sash that tied at the back and fell in a train to the ground.
Other looks: Olivia Wilde in a sexy, low-cut blush; Priyanka Chopra in a strapless white Zuhair Murad Couture; Andra Day in a light, one-shoulder yellow; Sophie Turner in oh-so-slight mint green. They were just a few of many who chose soft shades.
"I felt very princessy today," Chopra said of her form-hugging, mermaid-cut dress in silk tulle adorned with climbing flowers.
Wilde wore Valentino Haute Couture cut to the waist and highly dependent on sticky tape to keep everything up top in place. She paired it with a dainty choker.
"It's pretty fun," she said of the look that gave off an apron vibe.
And then there was Whoopi Goldberg. She was bold in black. She said her look was modeled on a gown that Bette Davis wore in "All About Eve."
Several celebs went with shorter hemlines, just above the ankle, including Daisy Ridley in a sparkly silver look that had dainty sheer bits at the waist and hem.
Representing her native Ireland, Saoirse Ronan chose all-around sequins in emerald from Calvin Klein. The gown hugged her body just right, her drop Chopard earrings mismatched — one in white pearls and the other emeralds. Another bright spot: Olivia Munn in orangey red. It's a shade similar to but not quite a match for the low-cut red look worn by Charlize Theron, a long necklace dangling down her bare chest and her hair swept back to one side.
Turner's side-slit Galvan for Opening Ceremony was part of an "ethically made" project called Red Carpet Green Dress. The initiative was spearheaded by James and Suzy Amis Cameron and had another participant on the carpet, Lily Cole.
"Everything here is all sustainable," Turner said.
It's not possible, meanwhile, that Rooney Mara's hair could have been any tighter. There was a tiny knot on top and it was braided close to her skull, her lips a deep red. Her dress, Givenchy Haute Couture, was long-sleeved, which is somewhat unusual, and had a diamond-shape cutout at the chest, along with a fairly modest slit. It also had buttons and busy pointed ruffles, all in embroidered gray tulle.
Lady Gaga chose a white caped-pants look and Naomi Watts shimmered in sea tones. Kate Winslet also evoked the sea in Ralph Lauren Collection custom liquid black silk lame. It was strapless with asymmetric draped detailing. Cate Blanchett's seafoam Armani Prive gown with loose floral appliques and a short train was the favorite of InStyle's fashion news director, Eric Wilson.
"There was so much individuality, so much whimsy to the look," he said. "I just thought it was so unexpected and pretty."
The evening's fluffy confection? Heidi Klum in Marchesa. It was also pale, shades of lilac and violet, and swallowed her up in folds, Grecian style.
Who stuck out among the guys?
Abraham Attah, the 14-year-old from Ghana who appeared in "Beasts of No Nation." He rocked a tuxedo with a pair of Tom's slip-ons in black. The slip-ons were custom-made but the company plans to distribute 10,000 pairs of shoes to Ghana in Attah's honor.
Of his big evening, Attah said: "Yeah, it's pretty crazy."
Associated Press 2016