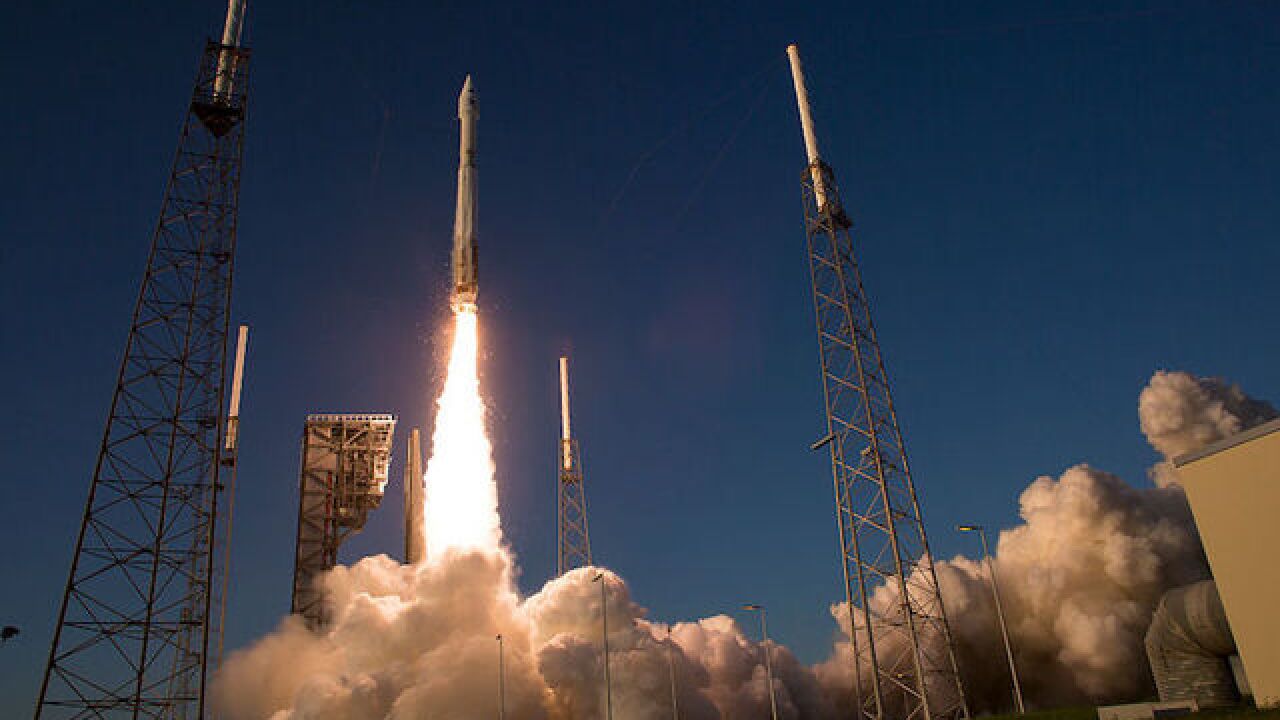 Copyright Getty Images
NASA/Joel Kowsky
<p>The United Launch Alliance Atlas V rocket carrying NASA's Origins, Spectral Interpretation, Resource Identification, Security-Regolith Explorer (OSIRIS-REx) spacecraft lifts off on from Space Launch Complex 41 on Thursday, Sept. 8, 2016 at Cape Canaveral Air Force Station in Florida. OSIRIS-REx will be the first U.S. mission to sample an asteroid, retrieve at least two ounces of surface material and return it to Earth for study. The asteroid, Bennu, may hold clues to the origin of the solar system and the source of water and organic molecules found on Earth. </p>

NASA's OSIRIS-REx mission and the asteroid Bennu have had a date planned for two years, and just after noon ET today, they finally got to meet face to face. OSIRIS-REx fired its thrusters for a small burn, putting it about 4.3 miles from Bennu, marking the end of its journey to the asteroid.

The mission -- which stands for Origins, Spectral Interpretation, Resource Identification, Security-Regolith Explorer -- is NASA's first asteroid sample return mission. It launched in September 2016 and will spend two years up close and personal with Bennu. First images of the asteroid from the spacecraft's perspective have appeared as it got closer and closer.

On Tuesday, the spacecraft will fly within 5 miles of Bennu, which will help design future orbits and map the surface.

Over the next year, OSIRIS-REx will survey the asteroid using five scientific instruments on board the spacecraft. These instruments will help it determine a safe location from which to collect a small sample from Bennu's surface that will be returned to Earth in September 2023.

"Bennu's low gravity provides a unique challenge for the mission," said Rich Burns, OSIRIS-REx project manager at NASA's Goddard Space Flight Center. "At roughly 0.3 mile in diameter, Bennu will be the smallest object that any spacecraft has ever orbited."

The sample from Bennu, a near-Earth asteroid, could help scientists understand not only more about asteroids that could impact Earth but about how planets formed and life began.

OSIRIS-REx has a camera suite, a laser altimeter for 3D mapping, a thermal emission spectrometer to take temperature and mineral content and spectrometers to measure X-rays, nearly infrared and visible light.

An arm mechanism called TAGSAM will reach out to collect the sample from Bennu's surface, making contact with the asteroid for five seconds in July 2020. During this contact, the arm will use a nitrogen gas burst to stir up rock and other materials on the surface so it can capture them. There is enough nitrogen for three attempts if the first is unsuccessful.

NASA said the estimated 2.1-ounce sample size equates to about 30 sugar packets worth of dirt and rocks.

The arm has a full range of motion, with joints capable of movement comparable to shoulder, elbow and wrist joints. It was "flexed" in space for the first time on November 14.

"The TAGSAM exercise is an important milestone, as the prime objective of the OSIRIS-REx mission is to return a sample of Bennu to Earth," said Dante Lauretta, OSIRIS-REx principal investigator at the University of Arizona, Tucson. "This successful test shows that, when the time comes, TAGSAM is ready to reach out and tag the asteroid."

In 2021, it will be time for the spacecraft to essentially turn around and begin its two-year journey home. The sample will be packed into a capsule that will drop in the Utah desert in 2023.

For two years after the return, the sample will be cataloged and analyzed. Afterward, 75% of the returned sample will remain at NASA's Johnson Space Flight Center so it can be used for more research by scientists from around the world.

Why did NASA select Bennu out of the 780,000 known asteroids in our solar system?

It was discovered in 1999, and scientists have been studying it ever since. The asteroid fits a number of criteria that make it intriguing and convenient.

Bennu is relatively close to Earth, and its orbit even crosses that of our planet, making a close approach every six years. Though small asteroids can rotate very quickly, Bennu has a diameter just a bit bigger than the height of the Empire State Building and rotates relatively slowly, each 4.3 hours. This means OSIRIS-REx can match its velocity and touch down briefly.

The asteroid could pass close to Earth, closer than the moon, in 2135, with even closer approaches possible in 2175 and 2195. A direct hit is unlikely, but the data gathered during this mission can help determine the best ways to deflect near-Earth asteroids.

The asteroid is also old and well-preserved, full of valuable materials that may even contain clues about how life began. Bennu is essentially a leftover from the formation of our solar system billions of years ago, although some of the minerals inside it could be even older.

This carbon-rich asteroid could be full of organic molecules, metals, platinum and even water -- the essential ingredients for life. It's because of objects like Bennu that these resources were delivered to Earth during its formation.

Asteroids could even serve as fuel stations for robotic and human missions if we can unlock the hydrogen and oxygen inside them, NASA said.

Bennu probably broke off of a larger asteroid in the asteroid belt between Mars and Jupiter a couple billion years ago. This knocked it through space until an orbit close to Earth locked it in place. And Bennu is believed to be a grouping of rocks held together by gravity rather than a single object.

But its orbit drifts 0.18 miles each year toward the sun, and OSIRIS-REx will enable researchers to understand why and to predict Bennu's movements. This could also explain how it ended up as a near-Earth asteroid.