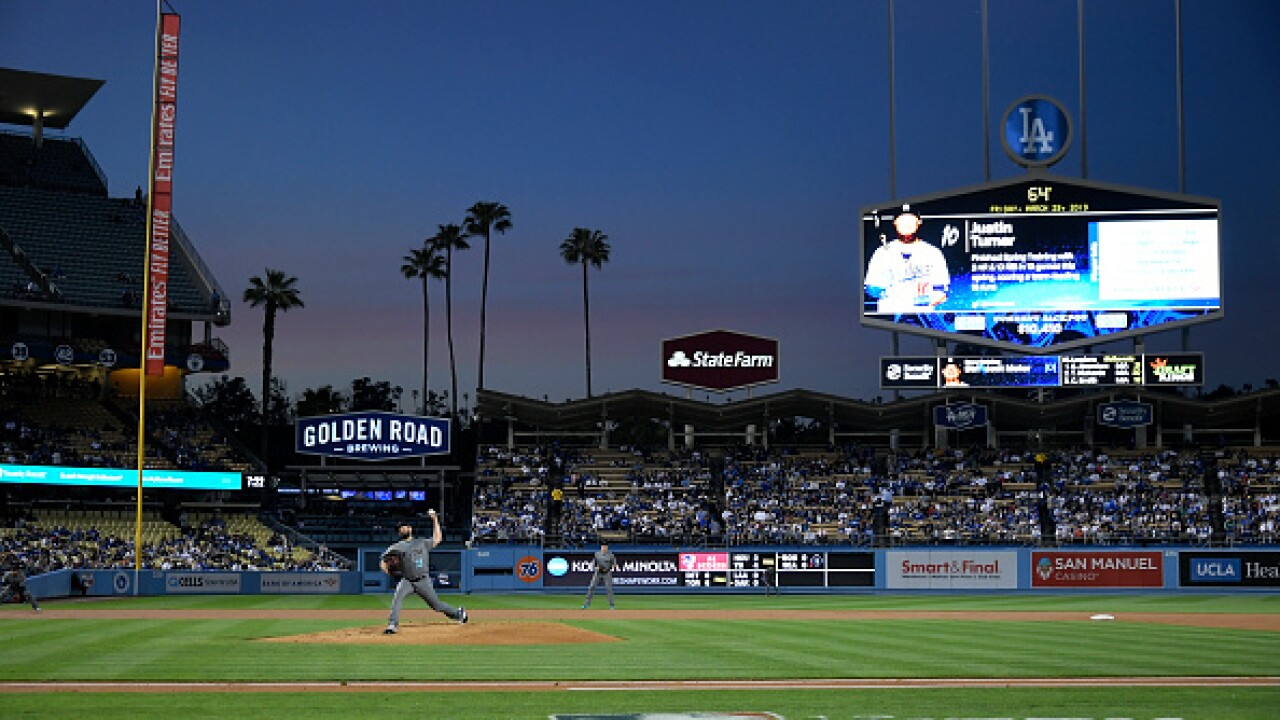 LOS ANGELES (CNS) - The search continued Monday for a man suspected of punching a 47-year-old man at a Dodger Stadium parking lot and seriously injuring him, leaving him on life support at County/USC Medical Center, according to his family and media reports.

Rafael Reyna, a father of four, was identified by his wife, Christel, in multiple media interviews as the man who fell to the ground when he was punched and suffered a fractured skull as the crowd was leaving following the Los Angeles Dodgers' 5-4 loss to the Arizona Diamondbacks at the end of 13 innings early Saturday, in the longest regular-season game in Dodger Stadium history -- 6 hours, 5 minutes.

She told NBC4 she was on Facetime with Rafael Reyna when she heard a woman yell ``Why did you do that?'' as a man approached her husband and cursed at him. Then she heard a crack and the screen went black.

She said her husband has swelling and bleeding on the brain.

Later in an interview with ABC7, Christel Reyna made a tearful plea for anyone who saw what happened to contact police.

She and an adult son have been with her husband at the hospital, but Christel Reyna said she has not told her younger children, ages 11 to 15.

A GoFundMe account has been set up for Reyna at www.gofundme.com/dodger-stadium-attack-victim-on-life-support.

Initially, Los Angeles police investigated the incident as an altercation but have now labeled it an assault.

The suspect, who got away, is described as a man in his 20s who might have driven off in a white SUV, possibly a Toyota 4Runner, police said.

The Dodgers security team is working with police and the organization released the following statement Saturday:

``Last night, an altercation occurred suddenly between two men who were leaving the stadium,'' the statement said. ``One of the men was injured as a result of the altercation. A witness immediately reported the incident to stadium personnel, and emergency medical technicians were promptly dispatched to provide medical assistance at the scene. The matter is now being investigated by the Los Angeles Police Department, and the Dodgers are cooperating fully with the investigation.''

In 2011, an attack outside Dodger Stadium left Bryan Stow of Santa Cruz severely brain-damaged. The two men who attacked him pleaded guilty in 2014 and one, Lonnie Sanchez, was sentenced to eight years in prison while the other, Marvin Norwood, received a four-year sentence. The incident prompted increased security measures at the stadium.

Anyone with information on this weekend's attack was asked to call the LAPD.