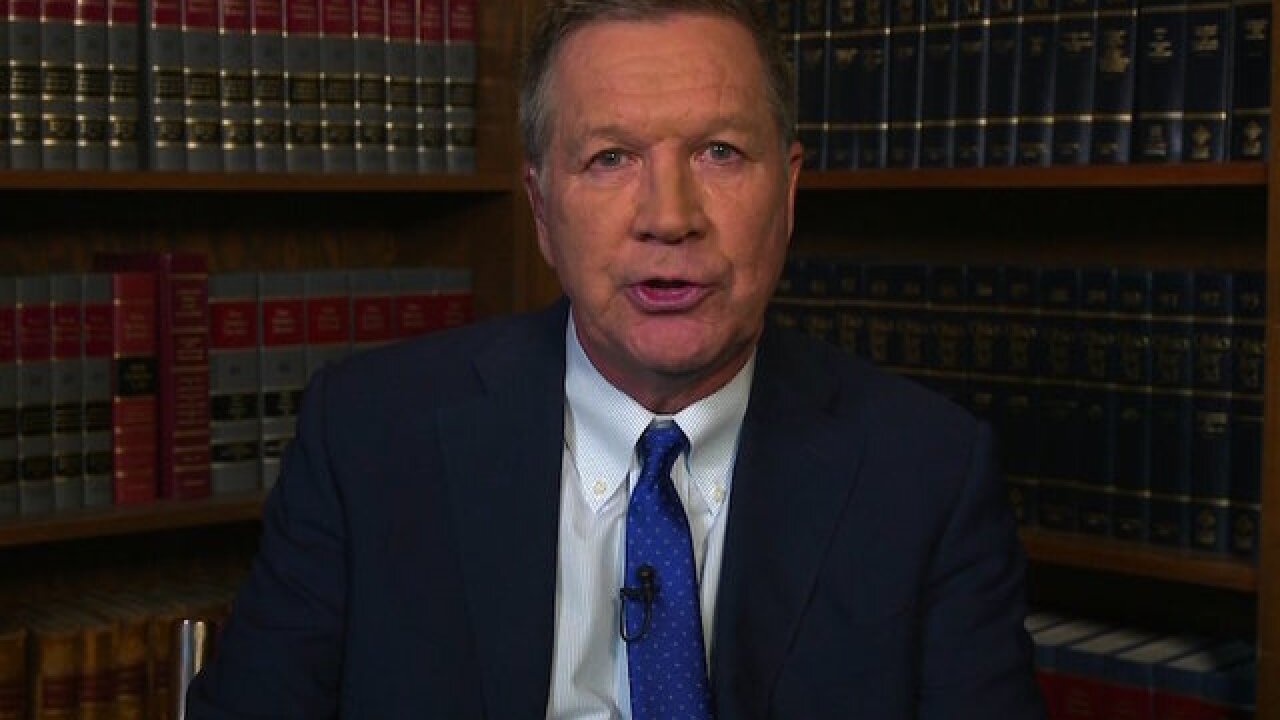 © 2018 Cable News Network, Inc.
CNN
<p>Ohio Republican Gov. John Kasich says he is "unlikely" to challenge President Donald Trump in 2020 as an independent, but also spent Tuesday in this first-in-the-nation primary state, insisting that he is wide open to any path to the White House that may make sense. (FILE)</p>

Ohio Republican Gov. John Kasich says he is "unlikely" to challenge President Donald Trump in 2020 as an independent, but also spent Tuesday in this first-in-the-nation primary state, insisting that he is wide open to any path to the White House that may make sense.

"Am I going to run as an Independent? No, I'm not even thinking about that," Kasich declared during a lunch time interview with CNN at the famed Red Arrow Diner here.

When pressed to keep traveling down this hypothetical road, Kasich tried to stop it.

"We're getting carried away here!" he exclaimed.

But carried away is Kasich's middle name.

He has nine months left in his term as Ohio governor, and this is his third trip to the Granite State since coming in second here in the 2016 GOP primary.

The reason for the questions about Kasich running as an independent are twofold: (1.) He sounds like an independent in today's polarized environment and (2.) Challenging an incumbent President in a Republican primary is not easy, especially one who still has support from 86% of Republicans nationwide, according to CNN's latest poll.

Kasich insisted that he's not surprised by the fact that Trump, who beat him in New Hampshire by 20 percentage points, is still popular among Republicans. He chalks that up to tribal politics, saying parties have become like sports -- you root for your team no matter what.

So, what makes this Republican think he has a shot at toppling a GOP president in this environment?

"When I came to New Hampshire I had less than 2% name ID. Now, unwittingly or whatever, I'm now more widely known," he said, underscoring his understanding of the volatile political climate. "Secondly, I can't tell you what's going to happen in the next five minutes."

Is coming to New Hampshire and staying in touch with supporters, friends and donors an insurance policy in case he does decide to run?

"Well, no, it's an options policy that I don't know what I'm going to do and in politics I'm still a young person, a young man and I don't know," the 65-year-old told CNN. "I know it's so hard for people to believe that, that I'm not plotting and scheming."

In the meantime, he says he is going to keep using his "voice" to call out the President and other Washington politicians.

"I fear that we could be entering a post-truth era," he said.

"That means we can't even agree on anything, so, how do you have a dialogue? How do you bring people together when we can't agree on what's real and what's not?"

He continued, "I want to do some things that keep my options open but where it's going to lead, i just don't know but I don't want my voice to be quieted, but you know what? The Lord may tell me, 'Hey John, shut up for a while.'"