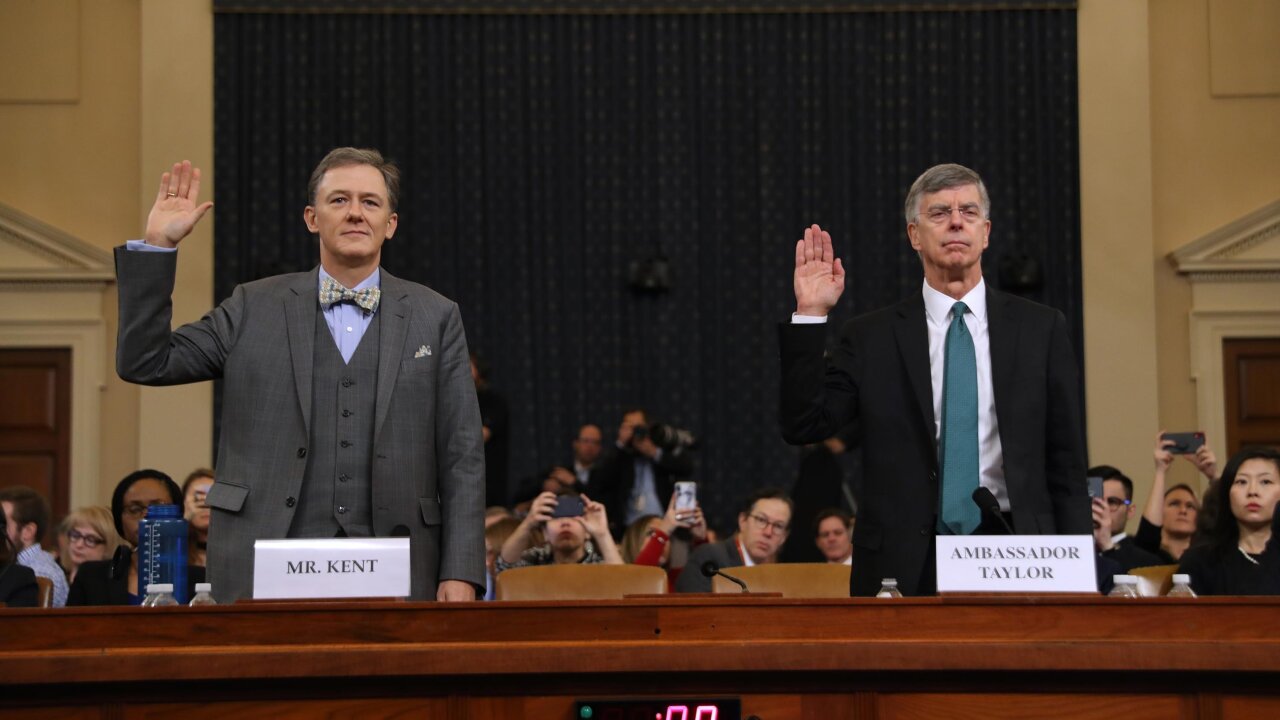 WASHINGTON – The top US diplomat in Ukraine told Congress Wednesday of a previously unknown conversation President Donald Trump had the day after his phone call with the Ukrainian President, in which Trump asked the US ambassador to the European Union about Ukraine opening investigations that would help him politically.

The testimony from diplomat Bill Taylor provides new details about the President's personal involvement in the push for Ukraine to open investigations that would help him politically, as House Democrats began public hearings in their impeachment inquiry that could lead to just the third impeachment of a president in US history.

Taylor testified that Gordon Sondland , the EU ambassador, told an aide that Trump's interest in Ukraine was the "investigations of Biden," and he cared more about an investigation of former Vice President Joe Biden than he did about Ukraine.

Taylor testified that his aide told him of a phone conversation Trump had with Sondland on July 26, one day after Trump's phone call with Ukrainian President Volodymyr Zelensky . Taylor's aide, who was accompanying Sondland to meetings in Kiev with Ukrainian officials, could hear Trump asking Sondland about the investigations, Taylor testified. Sondland "told President Trump that the Ukrainians were ready to move forward," Taylor said.

Taylor testified that his aide later asked Sondland what Trump thought of Ukraine.

House Intelligence Chairman Adam Schiff, a California Democrat, asked Taylor if Sondland's statement meant that Trump cared more about the investigations "than he does about Ukraine?"

The House is taking a historic step forward Wednesday in its impeachment inquiry of Trump with public hearings that Democrats hope will show the public that the President abused the power of his office to obtain dirt on a potential 2020 rival while withholding vital security aid from Ukraine. Wednesday's hearing is the first of five days of impeachment hearings House Democrats have scheduled before they decide whether to move forward with putting forward and potentially voting on articles of impeachment against the President.

Taylor and Deputy Assistant Secretary of State George Kent, who are testifying Wednesday, both received subpoenas to testify, according to an official working on the impeachment inquiry, which also were issued before their closed-door depositions last month.

House impeachment investigators also announced Wednesday they had scheduled two new depositions later this week, including David Holmes, an aide to Taylor. Two sources familiar with the matter told CNN that Holmes was the unnamed aide Taylor was referring to who overheard Sondland's conversation with Trump.

Taylor is one of the most important witnesses for the Democrats' impeachment case. He first testified behind closed doors last month that he was told Trump held up US security aid and denied a one-on-one meeting with the Ukrainian President unless Ukraine announced an investigation into his political rivals. Taylor said he was told by officials who spoke with the President that Trump wanted Zelensky to "go to a microphone" to announce the investigation.

In Wednesday's testimony, Taylor explained that Giuliani's efforts led to an "irregular" policy channel with Sondland, former US special envoy Kurt Volker and acting chief of staff Mick Mulvaney, which he said was "running contrary to the goals of longstanding US policy."

Kent's testimony also expressed alarm at Giuliani's efforts — which he described last month as a " campaign of lies " — that led to the ouster of US Ambassador to Ukraine Marie Yovanovitch and then the push for investigations.

"In mid-August, it became clear to me that Giuliani's efforts to gin up politically-motivated investigations were now infecting US engagement with Ukraine, leveraging President Zelensky's desire for a White House meeting," Kent said.

Both Taylor and Kent emphasized their careers in public service. Kent defended Yovanovitch and other US diplomats who have come under attack, adding that Giuliani's shadow efforts "hampered US efforts to establish rapport with the new Zelensky administration."

Taylor began his statement by stating that he was not testifying at Wednesday's hearing "to take one side or the other, or to advocate for any particular outcome of these proceedings."

"My sole purpose is to provide facts as I know them about the incidents in question as well as my views about the strategic importance of Ukraine to the United States," Taylor said.

Schiff said in his opening statement that the impeachment inquiry will seek to answer whether Trump invited Ukraine's interference in US elections, whether Trump conditioned a White House meeting and US aid on announcing political investigations and "if President Trump did either, whether such an abuse of his power is compatible with the office of the presidency?"

"The matter is as simple, and as terrible as that," Schiff said. "Our answer to these questions will affect not only the future of this presidency, but the future of the presidency itself, and what kind of conduct or misconduct the American people may come to expect from their Commander-in-Chief."

Republican lawmakers took aim at Taylor and Kent's lack of firsthand knowledge about the freezing of Ukraine aid. Several lawmakers pointed to the fact that neither diplomat had any conversation with the President himself or Mulvaney, and were basing their testimony on what others had told them.

"We got six people having four conversations in one sentence, and you just told me this is where you got your clear understanding? ... I mean, I've seen church prayer chains that are easier to understand than this," said Rep. Jim Jordan, an Ohio Republican who was added to the committee temporarily for the impeachment hearings. "With all due respect ambassador, your clear understanding was obviously wrong. Because it didn't happen."

Jordan and Rep. John Ratcliffe of Texas, who led much of the GOP questioning, took a more combative tone than Steve Castor , the GOP staff attorney who questioned the diplomats for the first block of the hearing. The Republican lawmakers pointed to Zelensky's comments that he felt no pressure and the fact that Ukraine ultimately received the aid in September.

"No pressure, no demands, no conditions, nothing corrupt. Nothing. Nothing on the call. That's what we heard President Zelensky say," Ratcliffe said.

Democrats pushed back by noting that the officials who had firsthand knowledge, like Mulvaney and former national security adviser John Bolton, had been blocked from testifying by the White House.

In his opening statement, Rep. Devin Nunes, the ranking Republican on the Intelligence Committee, accused Democrats of undertaking a "scorched-earth war against President Trump," saying they were using a "carefully orchestrated media smear campaign" to impeach the President.

"One of the mothers of all conspiracy theories is that somehow the President of the United States would want a country that he doesn't even like, that he doesn't want to give foreign aid to, to have the Ukrainians start an investigation into Bidens," Nunes said.

Before Kent and Taylor began speaking, Republicans expressed their complaints to Schiff about the process of the hearing, pushing for Schiff to issue a subpoena to the anonymous whistleblower whose complaint sparked the Democratic impeachment inquiry.

"You are the only member who knows who that individual is and your staff is the only staff of any member of Congress that has had a chance to talk with that individual," Jordan said. "We would like that opportunity. When might that happen in this proceeding today?"

The public portion of the impeachment inquiry continues Friday with the testimony of Yovanovitch. The Intelligence Committee has scheduled eight witnesses to appear at public hearings next week.