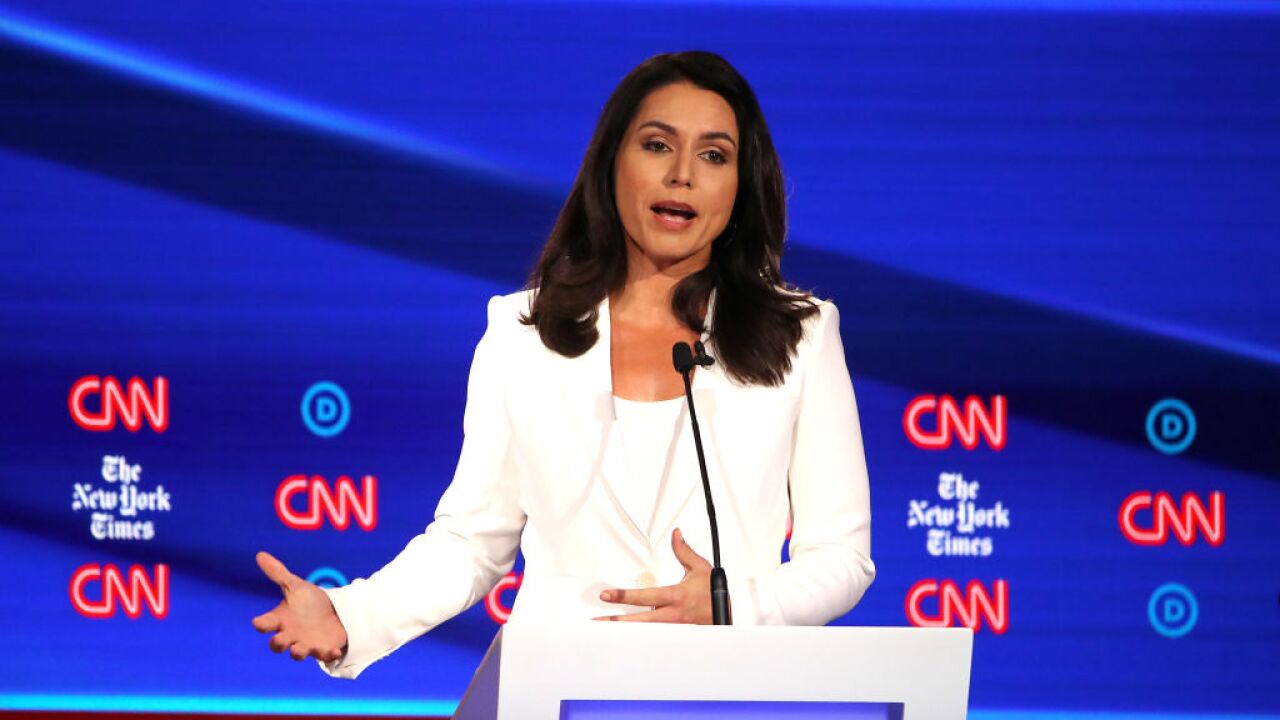 Hawaii Rep. Tulsi Gabbard announced she won't run for reelection to Congress in 2020, focusing her efforts on continuing her bid for the Democratic presidential nomination.

"I will not be seeking re-election to Congress in 2020, and I humbly ask you for your support for my candidacy for President of the United States," Gabbard said in a campaign video released late Thursday.

Gabbard thanked Hawaii for electing her to Congress and argued that she "can best serve the people of Hawaii and our country as your President and Commander-in-Chief. "

"As President, I will immediately begin work to end this new Cold War and nuclear arms race, end our interventionist foreign policy of carrying out wasteful regime change wars, and instead redirect our precious resources towards serving the needs of the people right here at home," Gabbard said.

Gabbard faces a tough road ahead to winning the Democratic presidential nomination. She's been polling in the single digits and now faces the possibility of not making the debate stage in November. Though she has met the donor threshold set by the Democratic National Committee, Gabbard has not reached the polling threshold.

"I wholly respect and appreciate Congresswoman Gabbard's decision not to pursue re-election for her Congressional seat as she pursues the Presidency. I wish her and her family the best going forward," he wrote on Twitter.

During the 2016 election, Florida Sen. Marco Rubio flip-flopped after he insisted he would give up his Senate seat at the end of this term, but then changed his mind and ran for reelection.

Candidates in Hawaii have until June 2, 2020 , to file for that November's election.

Gabbard's candidacy recently garnered headlines after former Secretary of State Hillary Clinton suggested the Hawaii congresswoman was a favorite of the Russians and was being groomed for a third-party run, though Gabbard has publicly ruled it out.

Some Hawaii political insiders have quietly speculated that Gabbard could be eyeing a cable news contributor deal, but publicly it remains just speculation.

On television, Gabbard has received a significant amount of coverage from Fox News, where she is often praised for her anti-establishment message. She made an appearance on the network last week with host Tucker Carlson to respond to Clinton and made a plea to Carlson's viewers to support her candidacy.

She often appears on Fox to discuss her foreign policy views, seen as unorthodox by Democratic Party standards. In September, Gabbard was on Fox News defending her statement that President Donald Trump cannot "pimp out" the American military to Saudi Arabia.