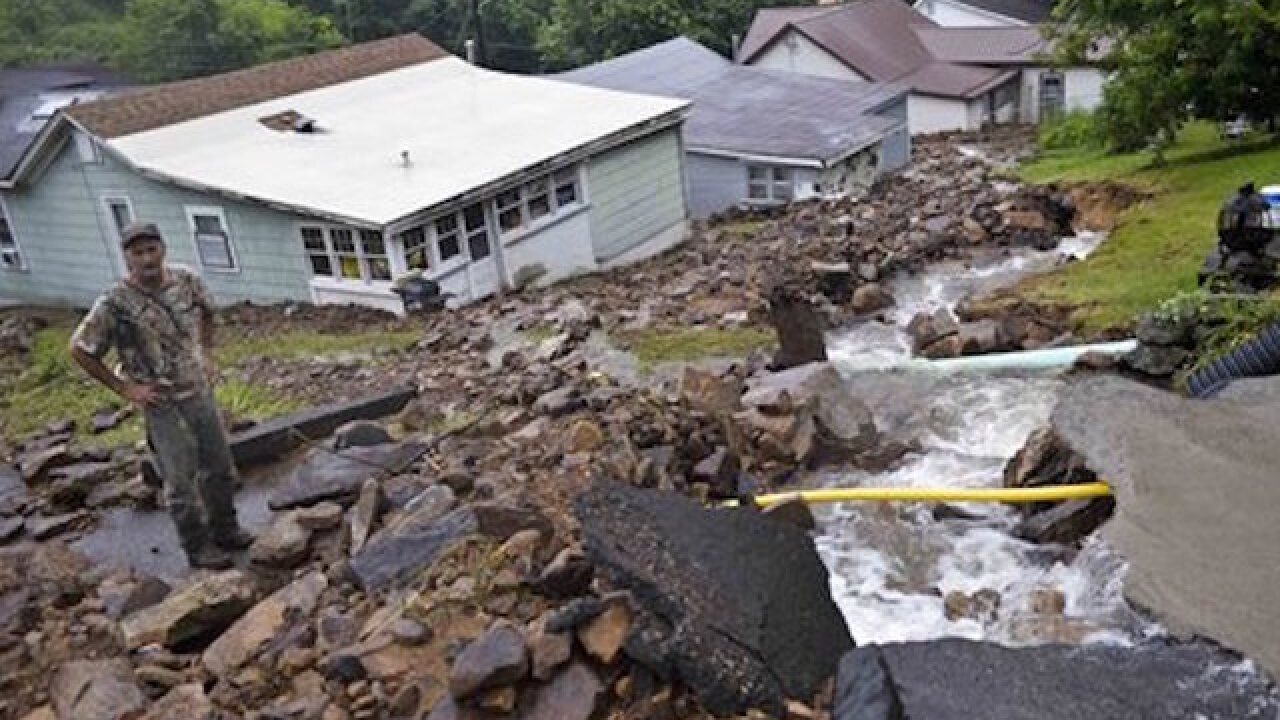 Copyright Associated Press
Christian Tyler Randolph
<p>Rob Morissin stands among the aftermath of a rockslide caused by severe flooding that poured into a property owned by his family since the 1930's in Richwood, W.Va. on Friday June 24, 2016. (Christian Tyler Randolph/Charleston Gazette-Mail via AP) MANDATORY CREDIT)</p> 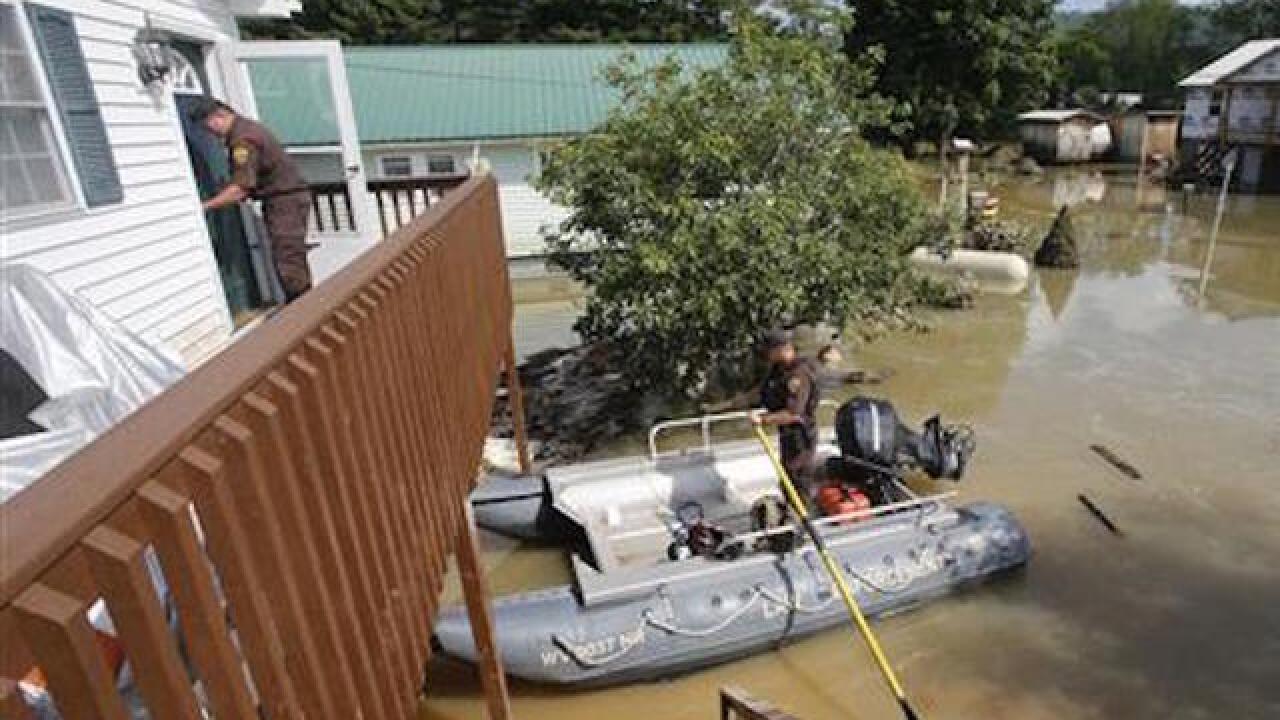 ANSTED, W.Va. (AP) — As West Virginians continued surveying damage in a state so devastated by floods that one said her community "smelled like death," residents braced for the prospect of more rain.

The National Weather Service has issued a flash flood watch for at least 25 West Virginia counties on Monday. Heavy rains were possible in many areas already ravaged by last week's floods that have killed 24 people statewide.

The forecast also includes hardest-hit Greenbrier County, where 16 people have died and floodwaters have yet to recede.

Dozens of residents of flooded-out Rainelle remained Sunday at a shelter more than 25 miles away at the Ansted Baptist Church, where singing from inside mixed with the bustle of activity outside.

The church's gymnasium has been converted to a shelter. The church also is a drop-off point for donated goods as well as a makeshift kennel for dog owners.

For now, it's home for Jerry Reynolds, his wife, Janice, and his brother, Marcus Reynolds.

Janice Reynolds said she drove back to Rainelle on Saturday to survey the damage. She said her home was destroyed, a vehicle was lost in the floodwaters and the community "smelled like death."

Jerry Reynolds says the flood was "the worst thing I've ever seen." But as he sat in his car at the shelter, he declared that "we're survivors. We'll make it."

Marcus Reynolds even found a bit of humor amid the sorrow.

"While we're at it, would you be interested in any oceanfront property?" he said. "I understand there's some available."

Bill Kious of Rainelle was asked how those at the shelter, many of them on modest incomes, were able to laugh.

"Frankly, because we've lived a rough lifestyle," Kious said. "It's a nature to us that we can't get rid of."

Rick Lewis of the Nuttall Fire Department said 129 people were staying Sunday at the church gymnasium. Many more Rainelle residents were sent to other shelters, he said.

Among those taking advantage of the shelter's kennel was T.J. Parker of Rainelle and his pet Titan.

Parker said he and Titan had to swim four blocks to safety. Along the way, he stopped to rescue an elderly man calling for help and brought him through floodwaters to a fire department. Parker said he had to go under water and hold his breath to support the man, then come up for air.

Volunteer Randy Halsey said the donated items at the church were heading specifically to Rainelle. He said it was difficult to estimate how many items had been donated because "as soon as it comes in, it's going right back out."

Authorities have yet to start sizing up the flood damage in West Virginia. But it is drawing comparisons to November 1985 floods that remain the state's most expensive natural disaster with more than $570 million in damage.

That year, the remnants of Hurricane Juan had brought rivers to near bankful when a low-pressure system stalled over the Mid-Atlantic region and produced as much as 10 inches of rain.

Forty-seven people died in West Virginia, more than half of them in Pendleton and Grant counties. The Potomac River at Paw Paw crested 29 feet above flood stage. More than 3,500 homes, 180 businesses and 43 bridges statewide were destroyed. Twenty-nine counties were declared federal disaster areas.

"This is the worst I've ever seen," said Fayette County Sheriff's Sgt. Bill Mooney, who served in the National Guard during massive floods in 2000-01. "Nobody expected 7 inches of (rain) in three hours."

Federal money will be part of the rebuilding equation. Sunday marks the first day people can apply for Federal Emergency Management Agency aid in the three worst-hit counties of Greenbrier, Kanawha and Nicholas.

Flooding at The Greenbrier resort prompted the PGA Tour to cancel a tournament there next week.

President Barack Obama's signature Saturday on the federal disaster declaration lets residents in the three counties get aid for temporary housing and home repairs, receive low-cost loans to cover uninsured property losses, and qualify for other assistance for individuals and business owners. Federal money to help the state and local governments is also available on a cost-sharing basis. FEMA officials were in the state to begin assessing the damage to infrastructure, homes and other property.

About 18,000 homes and businesses remained without power Sunday. Water is still not running in the Clendenin area, and residents are filling up jugs of water at stations provided by West Virginia American Water.

The floods prohibited Georgia resident David Stephens from doing contract work spraying weed killer to eliminate vegetation around poles. He saw someone buying water at a store and asked where the water was heading. So he went to the church in Ansted to help move donated supplies along.

"I just want to do whatever I can to help," Stephens said.