China strikes back with tariffs on $60 billion of US goods 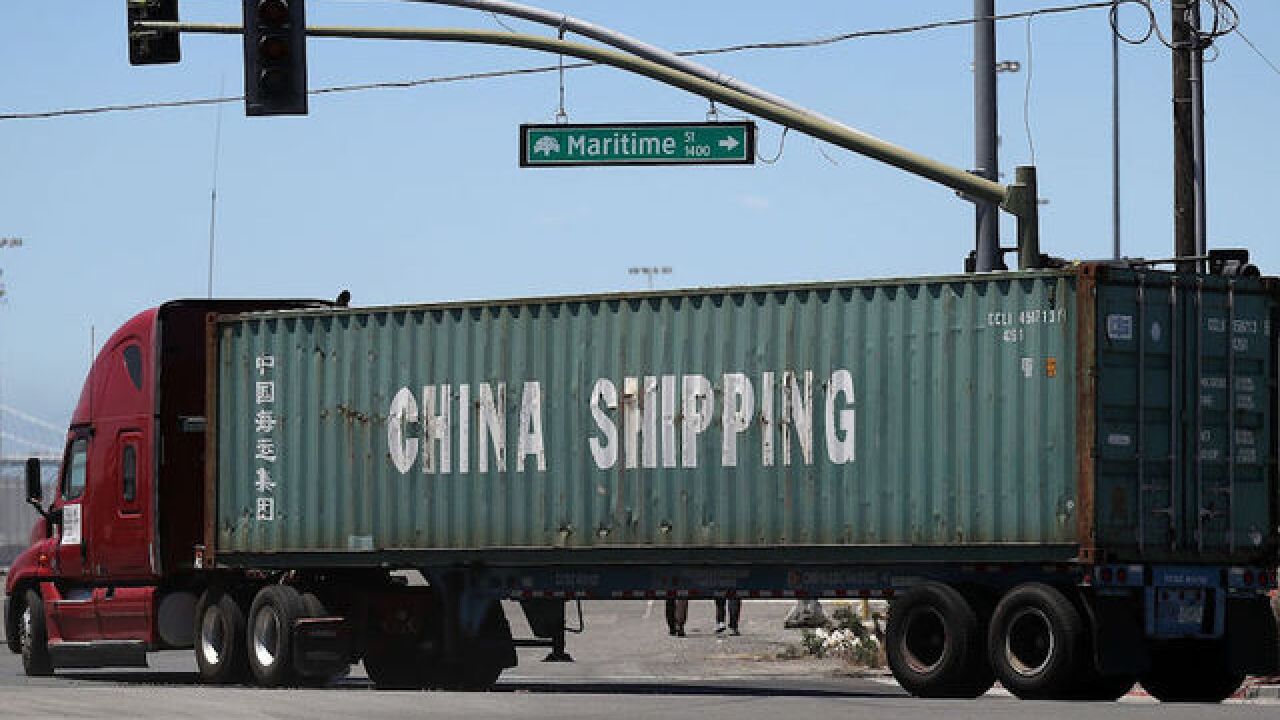 Image copyright 2018 Getty Images. All rights reserved. This material may not be published, broadcast, rewritten, or redistributed.
Justin Sullivan
<p>A truck carries a shipping container from China Shipping at the Port of Oakland on June 20, 2018 in Oakland, California. </p>

China has fired back at the United States after President Donald Trump ramped up the trade war with his biggest wave of tariffs yet.

The Chinese government said Tuesday that it would impose tariffs on US goods worth $60 billion following the Trump administration's announcement that it was hitting $200 billion worth of Chinese goods with new tariffs.

The US tariffs start at a rate of 10%, before rising to 25% at the end of the year. They come into effect on September 24, and will apply to thousands of Chinese products, ranging from food seasonings and baseball gloves to network routers and industrial machinery parts.

China's new tariffs will be levied at rates of 5% or 10%, depending on the product, from the same date, China's state council said.

The latest clash deepens the conflict between the world's top two economies that is already hurting companies on both sides of the Pacific. The latest US move means roughly half of the products that China sells to the United States each year will be hit by American tariffs.

Beijing had previously threatened to impose tariffs of between 5% and 25% on US products such as meat, coffee, furniture and auto parts — if the Trump administration went ahead with its plan to target $200 billion of Chinese goods.

China had already gone blow for blow with the United States on tariffs on more than $50 billion of each other's goods this year.

Its decision to retaliate against the latest salvo from Trump raises the prospect of further escalation in the trade war. The White House warned Monday that it would respond to any retaliation from Beijing with yet more tariffs on roughly $267 billion of Chinese exports.

The two economic superpowers had been preparing to hold a new round of talks this month. It's unclear whether those will now take place.

A Chinese Foreign Ministry spokesman said Tuesday that Trump's latest tariff salvo "has brought uncertainty" to the planned negotiations, but he stopped short of saying that Beijing was pulling out.

"The Chinese side has repeatedly emphasized that the only correct way to solve the trade dispute between China and the United States is through talk and consultation on the basis of equity, integrity and mutual respect," spokesman Geng Shuang said at a regular news briefing. "But what the US side has done doesn't show sincerity or goodwill."

"We stand ready to negotiate with China anytime, if they are willing to engage in serious talks," Kudlow said at the Economic Club of New York.

Several previous rounds of talks between the two sides failed to achieve any breakthroughs. Analysts are skeptical China will be willing or able to do enough to satisfy the Trump administration on some of its key concerns, including Chinese efforts to get hold of US technology and Beijing's ambitious industrial policies.

"The principal objective of the tariffs is probably not to bring Beijing to the bargaining table," Arthur Kroeber, a senior analyst at research firm Gavekal said in a note Tuesday. "Rather, it is to force US multinational companies to pull back their investments in China, so that the interdependence of the two rival economies is reduced."

"Against this aim," he added, "no possible offer by China can cause the tariffs to be lifted."