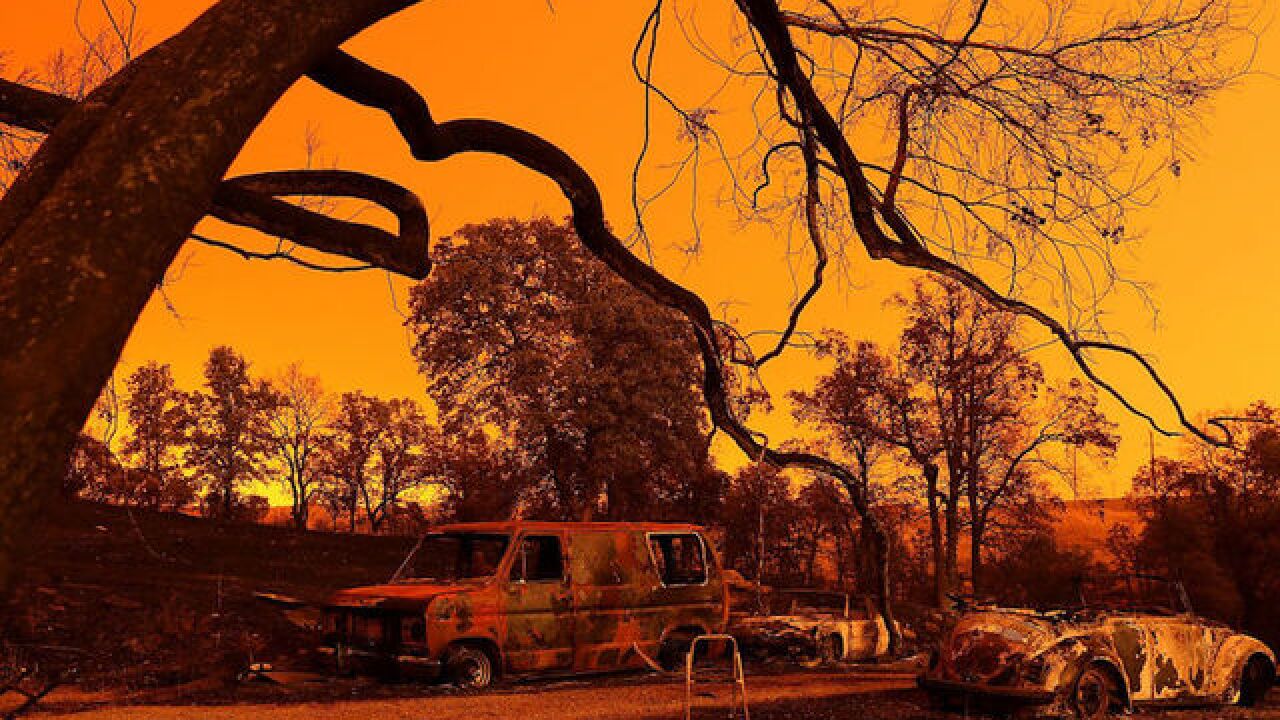 Image copyright 2018 Getty Images. All rights reserved. This material may not be published, broadcast, rewritten, or redistributed.
Justin Sullivan
<p>A view of cars that were destroyed by the Carr Fire on July 27, 2018 in Redding, California. </p>

The White House has approved a disaster declaration for Shasta County, California, where officials say the massive Carr Fire has killed seven people and is continuing to burn through homes and property.

The death toll in the Carr Fire reached seven Saturday when a Pacific Gas & Electric worker was killed while working with a crew to restore power in western Shasta County, utility spokesman J.D. Guidi said. An eighth fire-related death occurred in the Ferguson Fire, east of San Jose, when Capt. Brian Hughes of the Arrowhead Interagency Hotshot Crew was killed.

In a statement announcing the White House's approval Saturday, Gov. Jerry Brown said California had submitted the request for a Presidential Major Disaster Declaration earlier that day to help with the impact of fires across the state.

More than 14,000 firefighters are currently battling 17 major fires burning across California. In addition to the Shasta declaration, Brown's office said FEMA was considering requests for disaster declarations for Lake, Mendocino and Napa counties "on an expedited basis."

"The Mendocino Complex fire remains a dynamic and rapidly changing challenge for firefighters, with additional evacuation orders issued on Saturday and thousands of structures remaining threatened by the massive wildfire." Brown's office said.

There are two Mendocino Complex Fires, according to officials. The larger one, the Ranch Fire, has consumed more than 181,000 acres -- most of them in the Mendocino National Forest -- as of late Saturday, while the other fire burning in Lake and Mendocino counties, the River Fire, has burned almost 48,000 acres.

In his request to President Donald Trump, Brown said the Carr Fire ranked as California's sixth most destructive, having destroyed more than 131,000 acres at the time of writing. More than 1,000 homes have been razed and 9,000 residents remain evacuated from their homes, he said.

"Battling these relentless fires requires a Herculean effort," Brown wrote. "Jurisdictions are drawing on any and all available resources to contain all of the fires statewide and to quickly attack and attempt to extinguish the myriad of new fire starts that arise across all regions of the state every day."

At the peak of the fires more than 55,000 people were evacuated from their homes, Brown wrote.

The affected counties had higher than state and national average populations of elderly, disabled and residents living below the poverty line, he said, with many residents on low or fixed incomes.

The declaration for Shasta County will increase residents' eligibility for programs and support in areas such as housing, employment and medical services and provide financial assistance to affected governments dealing with emergency response and recovery costs.

"These kinds of horrible situations bring people together, regardless of the lesser kind of ideologies and partisan considerations," Brown told a news conference Saturday.