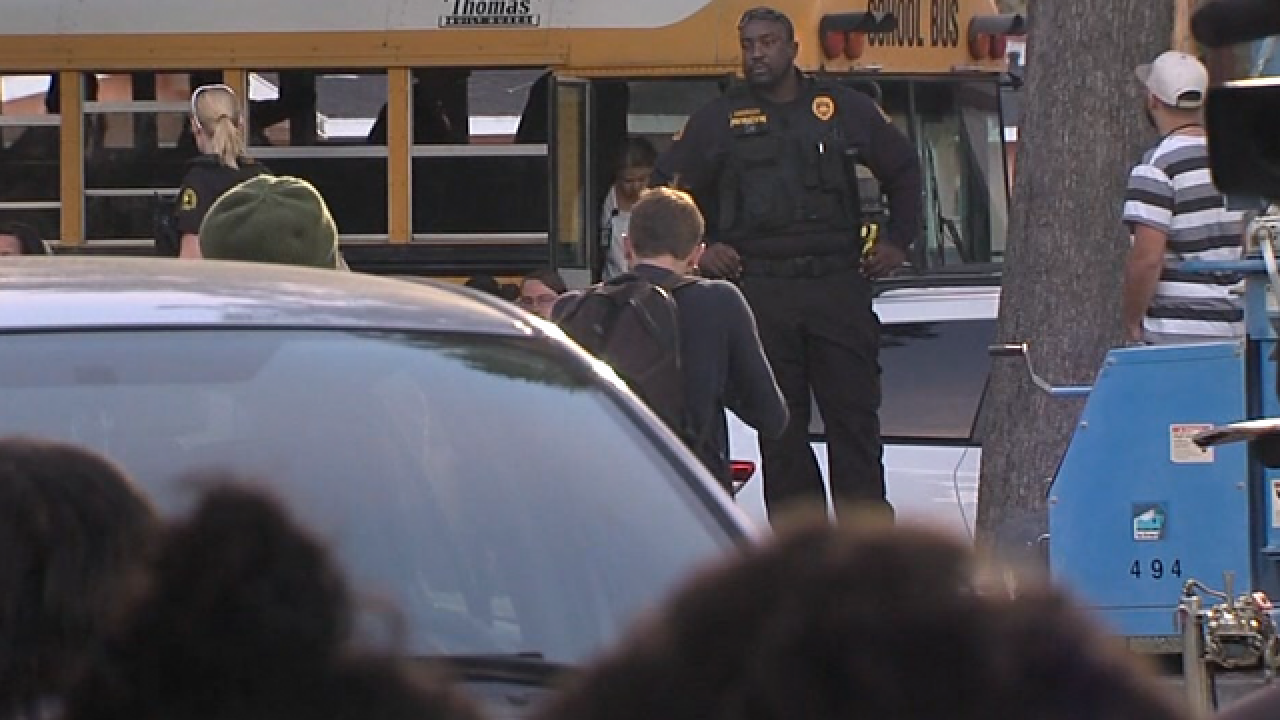 SAN BERNARDINO, Calif. (AP) — San Bernardino gunman Syed Rizwan Farook had been in contact with known extremists on social media, a U.S. intelligence official said Thursday, and police said he and his wife had enough bullets and bombs to slaughter hundreds when they launched their deadly attack on a holiday party.

The details came to light as investigators tried to determine whether the rampage that left 14 people dead was terrorism, a workplace grudge or some combination.

The husband-and-wife killers were not on the FBI's radar before the massacre, said a second U.S. official, who likewise spoke on condition of anonymity because he was not authorized to discuss the investigation.

Wearing black tactical gear and wielding assault rifles, Farook, a 28-year-old county restaurant inspector, and his wife, Tashfeen Malik, 27, sprayed as many as 75 rounds into a room at a social service center for the disabled, where Farook's co-workers had gathered for a holiday banquet Wednesday. Farook had attended the event but slipped out at some point, then returned in battle dress.

Four hours later and two miles away, the couple died in a furious gunbattle in which they fired 76 rounds, while 23 law officers unleashed about 380, police said.

On Thursday, Police Chief Jarrod Burguan offered a grim morning-after inventory that suggested Wednesday's bloodbath could have been far worse.

The couple left behind three rigged-together pipe bombs with a remote-control detonating device that apparently malfunctioned, and they had more than 1,600 rounds of ammunition left when police killed them in their rented SUV, Burguan said.

Also, at a family home in the nearby town of Redlands, they had 12 pipe bombs, tools for making more, and over 3,000 additional rounds of ammunition, the chief said.

"We don't know if this was workplace rage or something larger or both," Attorney General Loretta Lynch said in Washington, echoing President Barack Obama. "At this point in time we don't know the motivation."

Investigators are trying to determine whether Farook became radicalized and, if so, how, and whether he was in contact with any foreign terrorist organization, said the U.S. intelligence official, who spoke on condition of anonymity because he was not authorized to discuss the matter publicly.

But the official said Farook had been in touch on social media with extremists who were under FBI scrutiny.

The second U.S. official said the FBI was treating the attack as a potential act of terror but had reached no conclusion that it was. The official said that Farook's contacts online did not involve "significant players on our radar" and dated back some time, and there was no immediate indication of any "surge" in communication ahead of the shooting.

The official cautioned that such contact "in and of itself doesn't mean that you a terrorist."

Wednesday's attack was the nation's deadliest mass shooting since the Newtown, Connecticut, school tragedy three years ago that left 26 children and adults dead.

Twenty-one people were injured before the day was out in this Southern California city of 214,000, including two police officers, authorities said. Two of the wounded remained in critical condition.

"There was obviously a mission here. We know that. We do not know why. We don't know if this was the intended target or if there was something that triggered him to do this immediately," David Bowdich, assistant director of the FBI's Los Angeles office, said as the bureau took over the investigation.

Farook has no known criminal record, Burguan said. He was born in Chicago to a Pakistani family, was raised in Southern California and worked at San Bernardino County's Department of Public Health for five years, according to authorities and acquaintances. The Saudi Embassy said he traveled to Saudi Arabia in the summer of 2014 for nine days.

As for Malik, she came to the U.S. in July 2014 on a Pakistani passport and a fiancée visa, authorities said. To get the visa, immigrants submit to an interview and biometric and background checks — screening intended to identify anyone who might pose a threat.

Adam Lankford, a criminal justice professor at the University of Alabama, said his review of mass public shootings in the U.S. indicates this is the first one in recent history to involve a male-female team.

Federal authorities said that Farook legally bought two handguns used in the massacre and that their two assault rifles were legally bought by someone else. They did not say how the rifles got into the attackers' hands.

As for any workplace conflicts, co-worker Patrick Baccari said that up until the rampage, Farook showed no signs of unusual behavior and was a reserved young man.

Two weeks ago, Farook and one of the co-workers he killed, 52-year-old Nicholas Thalasinos, had a heated conversation about Islam, according to Kuuleme Stephens, a friend of the victim's.

Stephens said she happened to call Thalasinos while he was at work and having a discussion with Farook. She said Thalasino told her that Farook "doesn't agree that Islam is not a peaceful religion."

Before they went on the rampage, the couple dropped off their 6-month-old daughter with relatives Wednesday morning, saying they had a doctor's appointment, according to Hussam Ayloush, executive director of the Council on American-Islamic Relations.

Baccari said he was sitting at the same banquet table as Farook before Farook suddenly disappeared, leaving his coat on his chair. Baccari said that when the shooting started, he took refuge in a bathroom and suffered minor wounds from shrapnel slicing through the wall.

The shooting lasted about five minutes, he said, and when he looked in the mirror he realized he was bleeding.

"If I hadn't been in the bathroom, I'd probably be laying dead on the floor," he said.