Here are 5 news headlines to know for today, Nov. 1 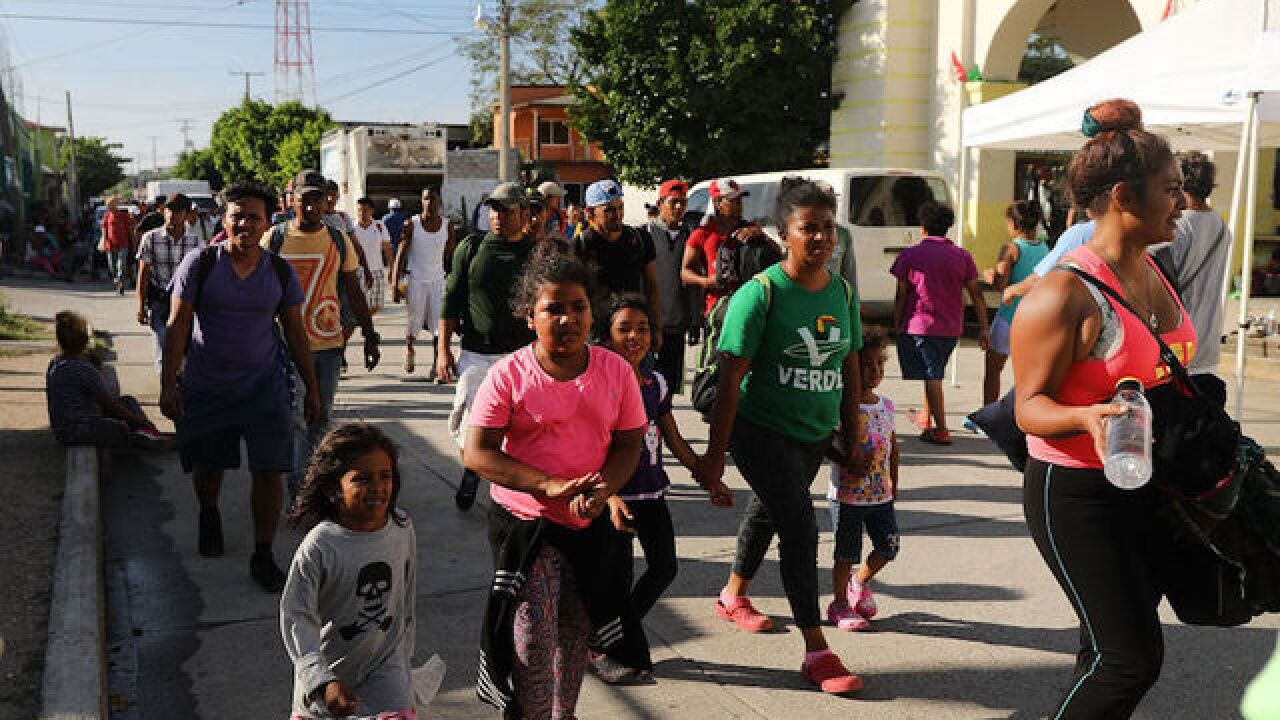 Image copyright 2018 Getty Images. All rights reserved. This material may not be published, broadcast, rewritten, or redistributed.
Spencer Platt
<p> Some of the thousands of Central American migrants arrive into the small town of Santiago Niltepec on October 29, 2018 in Santiago Niltepec, Mexico.</p>

Your trick-or-treating kids brought home candy you can't stand? (We're looking at you, licorice.) No worries. Check out the candy machine that swaps out all the treats you hate. Here's what else you need to know to get up to speed today.

A big breakthrough in the Lion Air crash investigation: One of the plane's so-called "black boxes" has been found. Video shows divers bringing the device, which houses flight data, aboard a rescue ship. Its discovery should help explain why the plane, a practically new Boeing 737, crashed into the Java Sea this week off Jakarta, killing 189 people. Some parts of the fuselage may have also been found.

Jamal Khashoggi was strangled as he entered Saudi Arabia's consulate in Istanbul last month, Turkish prosecutors said, adding it was all part of a premeditated plan. The chief prosecutor's office in Istanbul also said Khashoggi's body was dismembered. It's still unclear what happened to the journalist's remains, but The Washington Post reports they may have been destroyed in acid at the consulate or at the residence of the Saudi consul general. Turkey's President wants Saudi Arabia to reveal the location of Khashoggi's body and hand over 18 suspects. Meantime, the US is trying to capitalize on Saudi weakness over Khashoggi to end the brutal civil war in Yemen and ease a regional standoff with Qatar, officials said.

We're in the home stretch in this election cycle, and things are heating up. President Trump, on a multistate campaign swing, released a new ad on immigration that some are calling the most racist political ad in three decades. In keeping with his immigration theme, the President said he might send 15,000 troops to defend the southern border and doubled down on his vow to end birthright citizenship with an executive order (Spoiler alert: He can't). Speaking of which, here's what the 14th Amendment really says.

Meanwhile, here in Georgia, the gubernatorial candidates are bringing in the big guns. Democrat Stacey Abrams will have Oprah -- yes, that Oprah -- campaigning for her today. But Republican Brian Kemp is no slouch on big-time surrogates either. He'll have both President Trump and Vice President Mike Pence in the Peach State before polls open Tuesday.

DJ Durkin's return as the University of Maryland's head football coach lasted all of one day. The school's outgoing president fired Durkin, who had been on leave since the death this year of player Jordan McNair after a team workout. Maryland's board of regents had given Durkin the OK to come back Tuesday, after a report on the football team's culture said it wasn't "toxic." But that decision outraged McNair's family, students, faculty and some Maryland lawmakers, so Durkin got axed. Others on the coaching staff are still on leave, and a strength coach was fired, too. An independent medical report found several issues with McNair's treatment, including failure to assess his vital signs and recognize his heat illness, and not having proper cooling devices.

We now know how mob boss and FBI informant James "Whitey" Bulger died, and it was just as violent as the life he lived. Bulger, 89, was beaten beyond recognition at a West Virginia prison by multiple attackers. They also tried to cut his tongue out, a law enforcement official said. That vicious punishment is popular in the organized crime world for people who cooperate with law enforcement; one of two suspects in the brutal beating is a Mafia hit man.

People are talking about these. Read up. Join in.

Park rangers at Yellowstone warn people not to throw stuff into the geysers because sooner or later (sometimes decades later) it all comes back out.

Most people, when they have painful kidney stones, stay in bed. When gymnast Simone Biles gets them, she leads Team USA to a world championship.

When their favorite bookstore was forced to relocate after a rent increase, these English book lovers formed a human chain to move the books.

End of the road

After 20 years, Tyler Perry is killing off his iconic "Madea" character because he doesn't "want to be her age, playing her."

Pay raises and hiring decisions voted on by workers? Yep, that's just how things work at this travel insurance website.

Or we could all go work at the company that lets you drink as many as four glasses of beer per day at its offices.

Will you do the fandango?

With a new movie about Queen coming out, "Bohemian Rhapsody" seems to be everywhere again. Here, it's performed in about every singing style imaginable. (Click to view.)