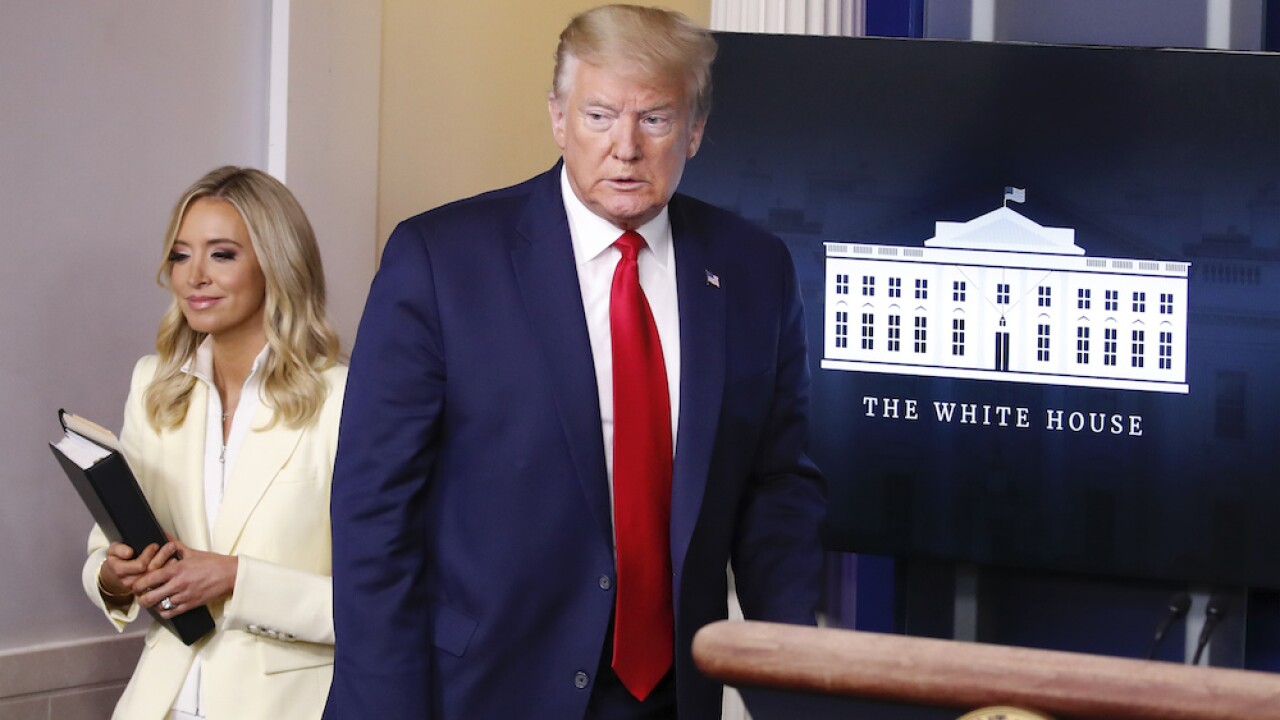 Copyright 2020 The Associated Press. All rights reserved.
Alex Brandon/AP
FILE - In this May 22, 2020, file photo President Donald Trump arrives to speak with reporters about the coronavirus in the James Brady Briefing Room of the White House in Washington with White House press secretary Kayleigh McEnany. (AP Photo/Alex Brandon, File)

Two days after President Donald Trump told the right-wing hate group Proud Boys to “stand back and stand by” when asked to denounce white supremacists, his lack of a clear denouncement is still making news.

His spokesperson, Kayleigh McEnany, in her first briefing to reporters since Tuesday’s debate, also seemed to avoid a direct statement condemning these groups.

John Roberts, a reporter from Fox News, asked McEnany, “I’d like to ask you for a definitive and declarative statement, without ambiguity or deflection, as the person who speaks for the president, does the president denounce white supremacism and groups that espouse it in all its forms?”

She responded that the president has answered the question already. She then read past statements from President Trump dating from 2017, 2018 and in 2019 in which he stated “in one voice our nation must condemn racism, bigotry, and white supremacy.”

Roberts pressed McEnany, “Just to clear it up this morning, can you, naming it, can you make a declarative statement that the president denounces it.”

“The president has denounced white supremacy, the KKK and hate groups in all forms,” McEnany responded, eluding to previous statements from the president and offering to email them to Roberts.

“I would say almost everything I see is from the left wing, not the right wing,” Trump responded. “I’m willing to do anything. I want to see peace.”

When pressed further, Trump said, “What do you want to call them? Give me a name. Give me a name?” Finally, the Proud Boys group was suggested.

The president then said, “Proud Boys — Stand back, stand by. But I’ll tell you what, somebody’s got to do something about antifa and the left because this is not a right-wing problem..... This is a left wing problem."

Then on Wednesday, when asked to clarify his statements and given an opportunity to condemn white supremacists, President Trump told reporters he doesn’t know who the Proud Boys are.

“I don’t know who Proud Boys are, but whoever they are, they have to stand down and let law enforcement do their work,” he said,

FBI Director Christopher Wray told lawmakers antifa is an ideology, not an organization. This contradicts Trump, who has said he wants to designate antifa as a terror group.

“We don’t really think of threats in terms of left, right, at the FBI. We’re focused on the violence, not the ideology,” he said later.

The FBI director said during the mid-September hearing, racially motivated violent extremists, such as white supremacists, have been responsible for the most lethal attacks in the U.S. in recent years. But this year the most lethal violence has come from anti-government activists, such as anarchists and militia-types, Wray said.

The Proud Boys are a group that is designated as a "hate group" by the Southern Poverty Law Center. The Proud Boys embrace political violence against leftists. The group has battled with Black Lives Matter protesters in Oregon throughout the summer. The New York Times also reports that the group instigated violence against self-described anti-fascists in New York in 2018.

Vice reports that some Proud Boys members took the President's call to "stand back and stand by" as validation to continue battling leftists in Portland. On right-wing message boards like 4chan and on the encrypted messaging app Telegram, members rejoiced and embraced the president's comments.