The results of rising gas prices are being felt around San Diego. According to a recent poll, 38 percent of San Diegans are spending between $50 and $100 on gas every month. So how can locals save?

SAN DIEGO (KGTV) - We're all feeling it every time we go to the pump, and some new numbers reveal how much lighter our wallets are.

Every time Stephanie Sicat gets in the car for her commute from San Marcos to Kearny Mesa for her job as a radio producer, thoughts of work are not the only thing on her mind.

In all, Sicat spends about $100 dollars in gas every week.  She's hardly alone.  We looked at those gas costs in terms of your commute.  According to a scientific 10News/Union Tribune poll, 38% of county residents say they're spending between $50 and $100 a month in gas on the commute.  31% are spending between $100 and $200.  And 10 percent are forking over more than $200 every month.  For Sicat, all those numbers add up to some major belt tightening. 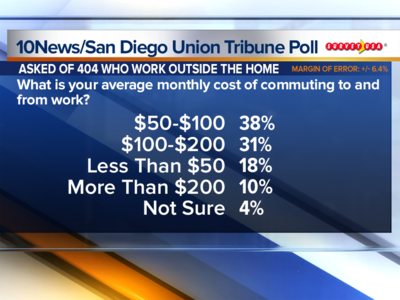 "I'd say after paying for bills and rent, a third of what remains goes to gas," said Sicat.

Sicat says eating out is now basically a special occasion thing.  She says even shopping for little things has become a math problem.

"Socks, toothpaste ... mouthwash, personal things I need around the house, I can't spend on those because I have to spend on gas," said Sicat.

On May 14, the average national price of regular gas was $2.87. In San Diego, the figure was almost one dollar higher, according to AAA. 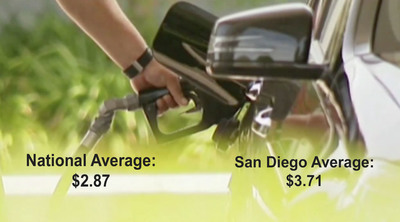 “Some of the factors at play in the rising prices: President Trump’s withdraws the U.S. from the nuclear deal with Iran and oil supplies that have continued to drop as U.S. exports surpass Venezuela—a surprising feat given Venezuela has the largest proven oil reserves in the world. In addition, as money continues to flow into commodities as bets for higher oil prices rise, there’s a strong chance of seeing crude oil prices continue to rally in the weeks ahead, with the odds of hitting $3/gallon nationally now better than 65% just in time for the summer driving season,” said Patrick DeHaan, head of petroleum analysis for GasBuddy.

HOW TO SAVE MONEY

Watch how you drive!  Fuel economy starts with steady speeds, because cars burn extra fuel during acceleration. Decelerate by coasting whenever possible. Also, use air conditioning conservatively to reduce the cooling demand on your car.

Get your car prepped to save gas. Removing unnecessary items can lighten your car and make it more fuel efficient. Keeping tires properly inflated and routinely maintaining the car will keep the engine at peak performance. Edmunds found that 'calm' driving and maintenance could save a combined 38 percent on fuel.

Buy your gas at the right time. GasBuddy analyzed gas prices for the first quarter of 2018 and found the best days to fill ‘er up. In California, Tuesday was the cheapest day to buy gas, while Friday was the most expensive. The best time to drive to the pump was between 8 and 10 a.m.

Shop around. GasBuddy tracks the cheapest gas in your neighborhood. 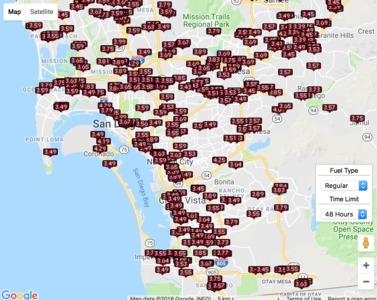 Are you feeling the gas price pinch? Email us at tips@10news.com.