Making it in San Diego: Teen employment on the rise

SAN DIEGO (KGTV) - The number of 16-24 year olds looking for jobs is rising across the country, almost getting back to the level it was at before the recession.

According to numbers from the Bureau of Labor Statistics, 20.89 million teens and young adults had jobs in the summer of 2017. That made it the 7th straight year of employment growth in that industry. 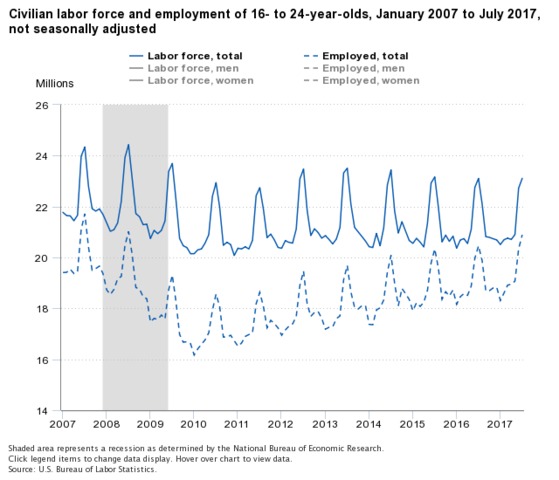 While there still aren't as many teens and young adults working as there was in the 1950's, 60's and 70's, it's a sign that more are looking for, and finding jobs.

Like many of his peers, Coronado High School Junior Quinn Perez plans to work this summer. He already has a job lined up at Holland's Bicycles.

"I've worked there for about 2 years now and I've worked my wya up to one of the manager positions," Quinn says.

His goal is simple, to save enough for a car.

"I've always been a fan of Camaros," he says, before adding, "But I'll probably go for a Honda or Jetta or something like that. A little more in my price range."

Other students just like having their own money to spend, like Anna Hinz, who is still looking for a job for the summer.

"It makes me feel like I have a little control over everything I do, rather than my parents making plans for me."

"It's all about the attitude"

But for the people who do the hiring, why you're working can be as big of an indicator of success as anything.

Patti Woods is the Talent Acquisition Supervisor for the YMCA. She oversees hiring of around 1,500 teens and young adults each summer to work as counselors and lifeguards.

She says your attitude is as important as anything else.

"Skills can be learned," she says. "I want people who are positive, flexible and willing to take feedback."

Woods advises teens and young adults to start their job search early. The YMCA does most of their summer hiring in the spring, because they have thousands of applicants to consider.

"Don't think you need to wait for the summer to find a summer job," she says. If you wait for summer, a lot of those jobs will be gone already."

Woods says the Y still has some open positions. Other fields, like retail and restaurants still have lots of openings as well. A recent search of sites like jobs.com and Monster.com for the keywords "Teen Jobs, San Diego" turned up hundreds of jobs. Most of them were at malls or movie theaters.

The Start of a Career

Your future plans are also something to keep in mind when looking for a summer job. The right position can help you pad a college application resume or learn skills for a future career.

In 2017, the Bureau of Labor Statistics found the top three industries where teens and young adults are working are:

Woods says keep looking even if nothing comes up at first.

"Keep searching for the job that's right for you," she says. "As soon as you find it, you'll know. And once you're in that position, the things you can learn can take you anywhere."