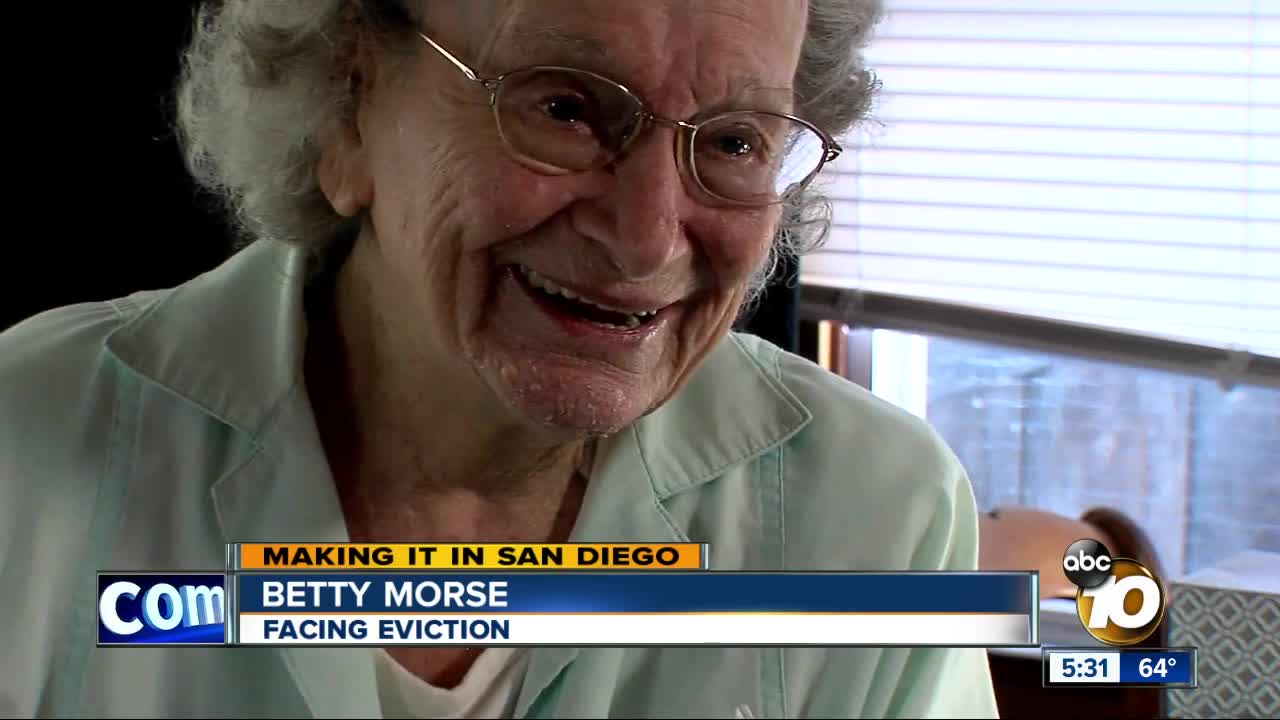 A 98-year-old woman is being evicted from her Ocean Beach home after living there for nearly three decades. 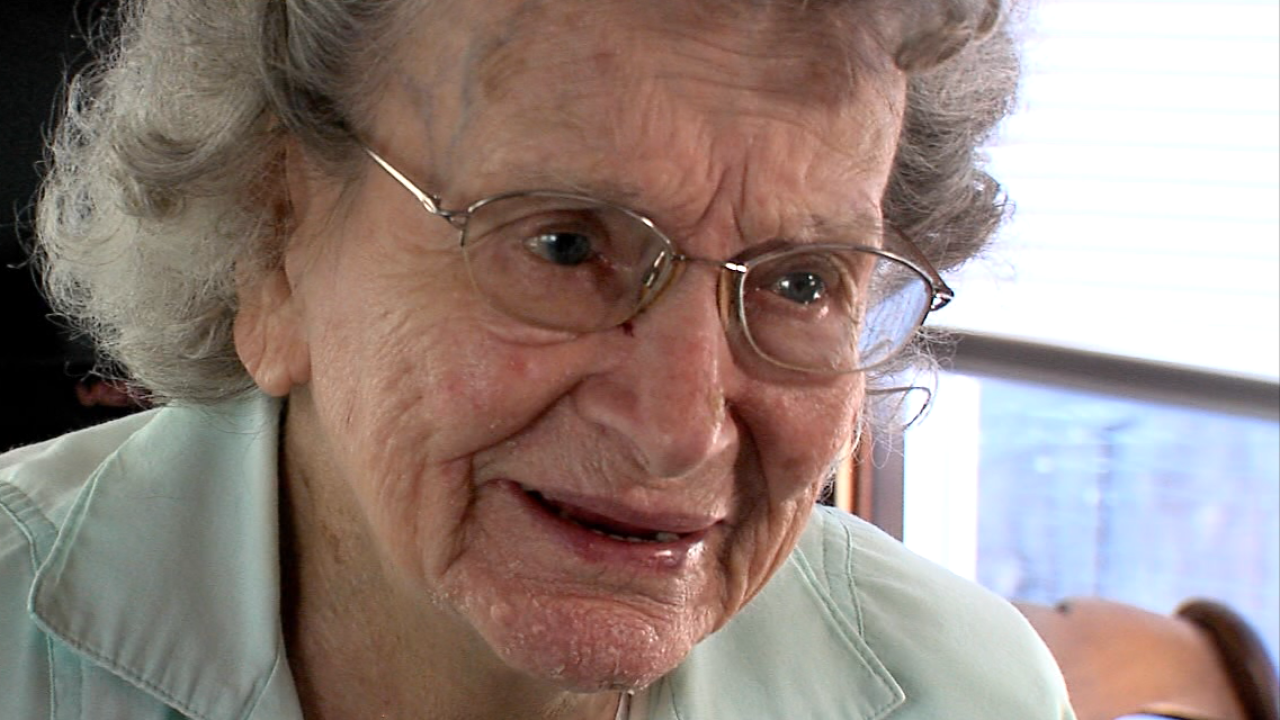 SAN DIEGO (KGTV) - A 98-year-old woman is being evicted from her Ocean Beach home after living there for nearly three decades.

Betty Morse moved into her tiny Ocean Beach cottage back in the late 1980’s. After her husband died, she needed a place she could afford.

Morse said the rent was about $100 when she moved in.

“It was a beautiful place to live because you could walk to the beach and watch the sunset,” she said.

This little place by the beach that fits her so well was supposed to be her last stop.

"See, I figured I'd lived a wonderful life in Ocean Beach, and I want to live and die here, you know, because I feel so comfortable here,” Morse said. “It's my little house, and it's all I know.”

Morse said this year she was asked to sign a new rental agreement. Her family had some disagreements with a couple of changes made by the landlord: one was a no-smoking addendum. Morse told 10News after decades of being a smoker at 98-years-old, she quit so she could stay in the home.

Despite her efforts, she said after the attorneys went back and forth a few times, she received a 90-day-notice in July terminating her tenancy.

Morse doesn't know what to do if she’s forced to leave.

“I don’t know who will rent to me because in two months I’ll be 99 and they are not going to be happy to rent an apartment,” she said.

During her 30 years at the property, Morse said she never had a problem with the rental.

A fixture in the neighborhood, she knows San Diego Mayor Kevin Faulconer and his mother.

"She said, 'Kevin, I want a picture of Betty with you' and he said 'OK mom,'” she said. “He came over to the step and she said, 'She's very unsteady on her feet, Kevin, don't let her fall.'"

Morse said her rent was always paid on time, a trait she picked up from the one man she ever loved.

"Before he died, when he was in the ICU, he had a tube, but he wrote, don't forget to pay the rent.”

"They clearly state on their 90-day notice that their just cause is they don't want to comply with Section 8,” said Pamela Macias with San Diego County Evictions.

Macias is working with Morse and her family to try and keep her in the home.

"She's willing to pay market rent and just for no reason at all they want her out,” Macias said.

Morse does have children, and instead of being out on the street she could move in with one of them. However, nearing the century mark she worries about being a burden.

The 90-day-notice has expired and Morse is still living in the property.

The property owner filed an unlawful detainer, which is basically an eviction lawsuit. Team 10 contacted the owners of the property; they declined to comment due to pending litigation.

They say the Section 8 Housing Choice Voucher Rental Assistance program includes options to meet the needs of both landlords and tenants. Landlords can increase rents for rental-assistance tenants as they would for market-rate tenants as long as 60 days’ notice is provided to the rental assistance tenants and the new rent is determined to be reasonable.

According to SDHC, to evaluate the reasonableness of the rent it compares the requested rent to the rents on other units on the premises with tenants who do not receive rental assistance.

Right now, landlords are not required to accept tenants who receive Section 8 rental assistance. However, in August 2019 a new amendment to San Diego’s source of income ordinance will prevent landlords from declining a tenant based only on the household receiving rental assistance.

San Diego’s Mayor and Housing
A spokesperson for San Diego Mayor Kevin Faulconer says he and his staff have gotten to know Betty through the years because her home is near the staging area of the Ocean Beach Holiday Parade. In a statement to 10News a spokesperson for the Mayor wrote:

Several members of the Mayor’s staff have been in contact with Betty and her family to offer referrals and guidance on her housing situation. Unfortunately, Betty’s story is a perfect example of the challenges we face in making housing more affordable for all San Diegans. There are many property owners in San Diego who accept federal vouchers and renters with subsidies. The Mayor has worked closely with the San Diego Housing Commission, the San Diego Regional Chamber of Commerce and the state and local apartment associations to bolster a landlord engagement program to get hundreds more landlords to make properties available to homeless individuals. That has resulted in over 1,000 homeless veterans being placed into housing and now the program has been expanded to find homes for all homeless individuals.

When asked what the Mayor is doing to combat situations like this a spokesperson wrote,

“Besides expanding landlord engagement, the Mayor last year released his “Housing SD” initiative – a set of proposals that would increase housing supply, lower costs and promote smart growth to address the lack of housing affordability for low- and middle-income San Diegans. The City Council has already adopted several of those proposals, including live/work quarter regulations, an affordable housing density bonus program, streamlined environmental review, accessory dwelling units, and multiple community plan updates. The Mayor also recently introduced a new proposal to allow for projects built near transit hubs to have no parking requirements. “