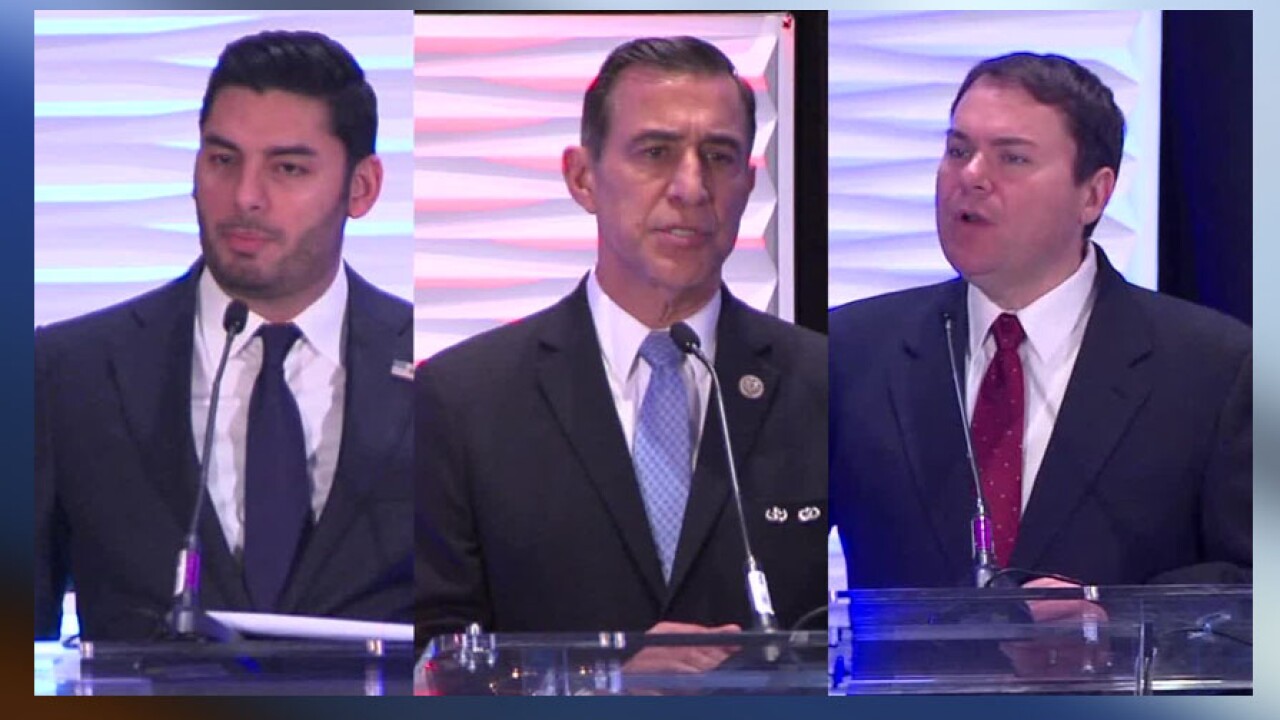 SAN DIEGO (CNS) - In a district long considered a conservative stronghold but recently thrown into turmoil with the resignation of Rep. Duncan Hunter, Democrats will begin an effort Tuesday to flip the 50th Congressional District, but a trio of notable Republicans are standing in the way.

Nine candidates are in the running for the 50th Congressional District seat left vacant following Hunter's guilty plea to misusing $250,000 in campaign funds and subsequent resignation in January.

Democrat Ammar Campa-Najjar -- who ran a spirited but ultimately unsuccessful campaign against Hunter in 2018 -- is the lone active Democrat on the ballot. He will look Tuesday to advance to the November general election, but will have to overcome strong campaigns from a trio of prominent Republicans.

Former Rep. Darrell Issa is seeking to return to the House where he served from 2001-19. Former San Diego City Councilman Carl DeMaio is making his second bid for a House seat, six years after losing to Rep. Scott Peters, D-San Diego, in the 52nd District.

Sen. Brian Jones, R-Santee, bills himself as "the only candidate with roots in the district, a proven conservative track record and the ability to get things done." He is a former assemblyman and Santee councilman.

Another Democrat, Marisa Calderon, suspended her campaign Jan. 31, but her name will still be on the ballot. That leaves Campa-Najjar as the only active Democrat in the race.

Campa-Najjar, 31, lost to Hunter in 2018 by a margin of 51.7%-48.3%. He was a deputy regional field director for then-President Barack Obama's re-election campaign in 2012, worked at the White House in the executive office of the president and led the Office of Public Affairs for the Department of Labor's Employment and Training Administration.

He says on his campaign website that he will work on behalf of residents' "personal health, safety and economic dignity." The site says he "is a staunch advocate for unions, for federal investment in apprenticeship jobs and for programs for small businesses owned by minorities, women, immigrants and veterans. His platform also includes reform to the Affordable Care Act, passing a clean Dream Act, investing in renewable energy and overturning Citizens United."

DeMaio, 45, served on the City Council from 2008-2012 and hosted a conservative radio talk show before leading his own podcast. He ran for San Diego mayor in 2012 but lost to Bob Filner. He holds a bachelor's degree from Georgetown University.

He touts his success as a businessman and leadership of the grassroots Reform California group that he says "advocates for government accountability reforms." According to his website, DeMaio wants to "shake" up congress "by advancing a bold, fresh Reform Agenda and recruiting other principled reformers to run for office." DeMaio also says he wants to "take back California from the Democrats' super-majority and their socialist agenda."

Issa, 66, was a congressman from 2001 until 2019 in both the 48th and 49th districts. He ran unsuccessfully for Senate in 1998. Issa is a U.S. Army veteran, and achieved the rank of captain while in the Army Reserves from 1976 to 1980. He holds a bachelor's degree from Kent State University at Stark.

Issa lists border protection as one of his top issues, noting on his website, "We must build the wall." He also calls for stronger immigration enforcement, including "removing those who have overstayed visas and entered the country on false pretenses." He said he will work to counter policies of "sanctuary cities," while also vowing to support efforts to challenge unfair trade practices by nations such as China.

Jones, 51, is a state senator representing the 38th district. He previously served in the Assembly and on the Santee City Council. He holds a bachelor's degree from San Diego State University. He touts his conservative voting record in the state Legislature, and says he has "demonstrated the ability to do the harder work of finding agreement in order to get things done."

The 50th District encompasses most of east San Diego County and a portion of Riverside County.

The top two finishers, regardless of party, will advance to the general election.