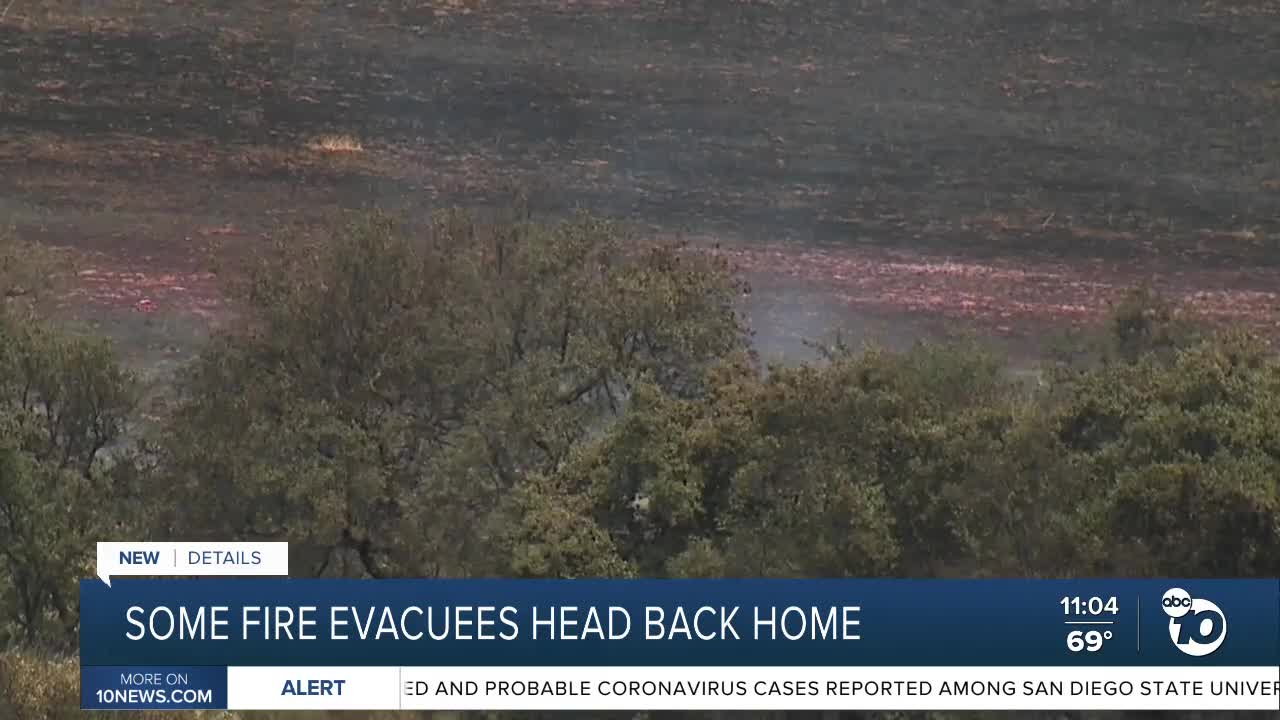 Some fire evacuees head back home 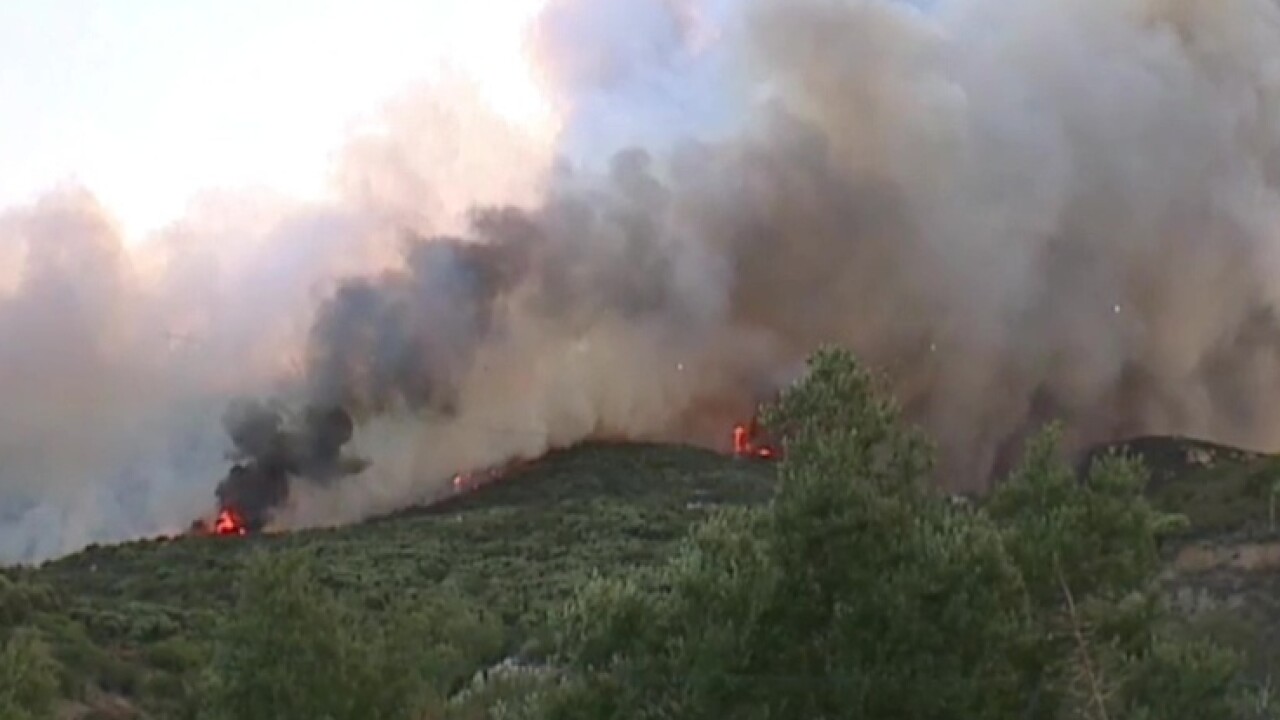 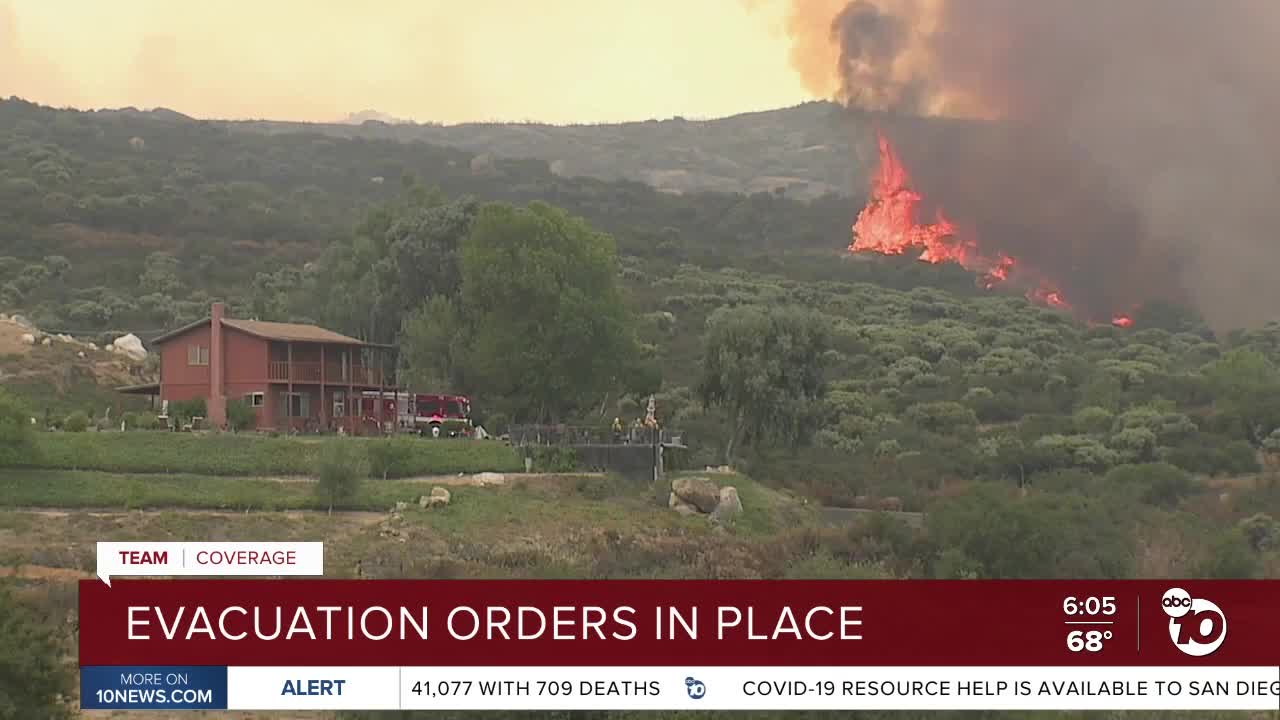 The blaze dubbed the Valley Fire erupted for unknown reasons early Saturday afternoon off Spirit Trail and Carveacre Road in Japatul Valley, southeast of Alpine, according to Cal Fire.

The wind-driven inferno had burned an estimated 17,665 acres and is 27% contained as of Wednesday evening. The blaze has destroyed 26 "habitable structures" and 25 "minor structures" and resulted in two injuries, though it was not clear if the victims were firefighters or civilians.

Gusty winds stoked the flames burning within established fire lines during the night, but the Santa Ana conditions -- strong, warm and dry air currents blowing from east to west -- did not intensify as much as meteorologists predicted they might, Cal Fire reported. As a result, humidity levels around the blaze remained high, aiding the firefighting effort.

A National Weather Service "red flag" wildfire warning -- a public alert about potential or ongoing critical combustion hazards -- is slated to remain in effect through 8 Wednesday evening, though the agency advised that it might be lifted "a few hours early" due to improving atmospheric conditions.

Gusts recorded overnight reached 54 mph at Sill Hill, 49 mph in Alpine, 47 mph in Hellhole Canyon, and 44 mph in Buckman Springs and Boulder Creek, according to the NWS.

Evacuation orders were reduced Wednesday to evacuation warnings for Corte Madera Ranch, and Barrett Dam. In addition, all areas were made accessible from Lawson Valley Road to the east with the exception of Forest Park Road and the north side of Japatul Road between Sycuan Truck Trail and Hidden Glen Road.

Proof of residency will be needed to return to homes.

Evacuation orders were in effect for the communities of Carveacre, Japatul Valley, Lawson Valley, Lyons Valley, and WiseCarver. In Descanso and Pine Valley, residents were advised to prepare to clear out of their homes on short notice if the flames begin closing in on their neighborhoods.

Residents in Alpine, Barrett Junction, Dulzura, Potrero and Viejas were warned Tuesday afternoon to prepare for potential evacuations, but those warnings were canceled Wednesday morning.

Shelters for the displaced were available at two high schools -- Steele Canyon in Spring Valley and El Capitan in Lakeside, the of latter of which also was accepting pets, according to the San Diego Humane Society.

Lakeside Rodeo Arena was available to shelter horses, and residents in need of a safe place to board their pets or livestock until the wildfire is extinguished were advised to make use of one of two San Diego County Animal Services shelters, in Bonita and Spring Valley.

#ValleyFire [update] Please see below for the latest update. pic.twitter.com/IsKNBHwKQ6

On Tuesday afternoon, San Diego Gas & Electric advised about 16,700 of its East County customers that public-safety power outages might become necessary due to the potential for weather-related utility combustion hazards. Overnight, SDG&E shut off electrical service to 49 addresses in Descanso. Following inspections of its transmission equipment in the community, the utility restored power to those locations late Wednesday morning.

Unplanned fire-related power outages, however, kept about 1,700 addresses in the vicinity of the blaze without electrical service early this afternoon, and possibly for several more days, according to SDG&E.

"Providing an exact estimate on when power might be restored is extremely difficult until crews gain full access to the area to assess damage and determine what repairs are necessary to ensure safe operation of the system," the utility advised at midday.

Due to smoke drifting over much of the county due to the blaze, the San Diego County Pollution Control District advised that air-quality levels were unhealthy in parts of the region and advised people to limit outdoor activities until conditions improve.

"Customers impacted by the Valley Fire could remain without power for several more days or longer," the utility advised. "As soon as first responders grant access to the area, our crews will begin assessing damage, make needed repairs and restore service as quickly and safely as possible. Thank you for your patience."

As the inferno spread, Gov. Gavin Newsom declared a state of emergency for San Diego County, a move intended to free up federal relief funds.