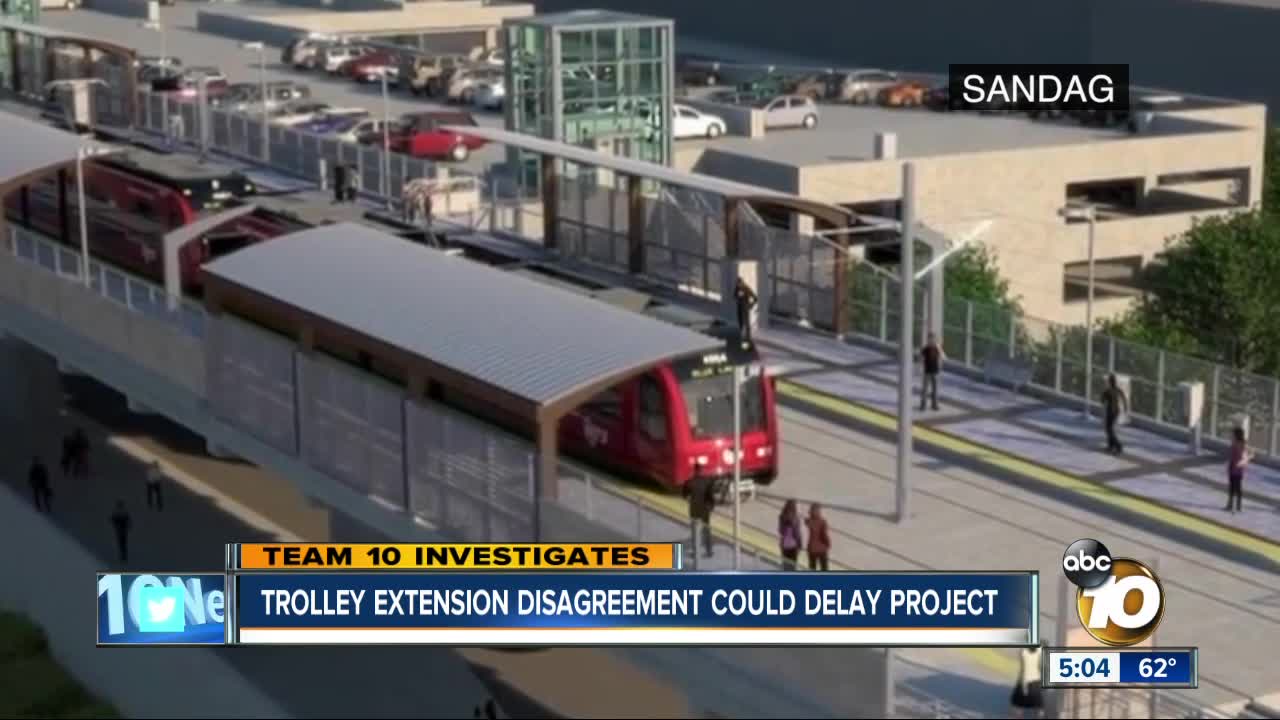 A $2 billion mid-coast trolley extension has hit a possible roadblock due to a parking garage in La Jolla. 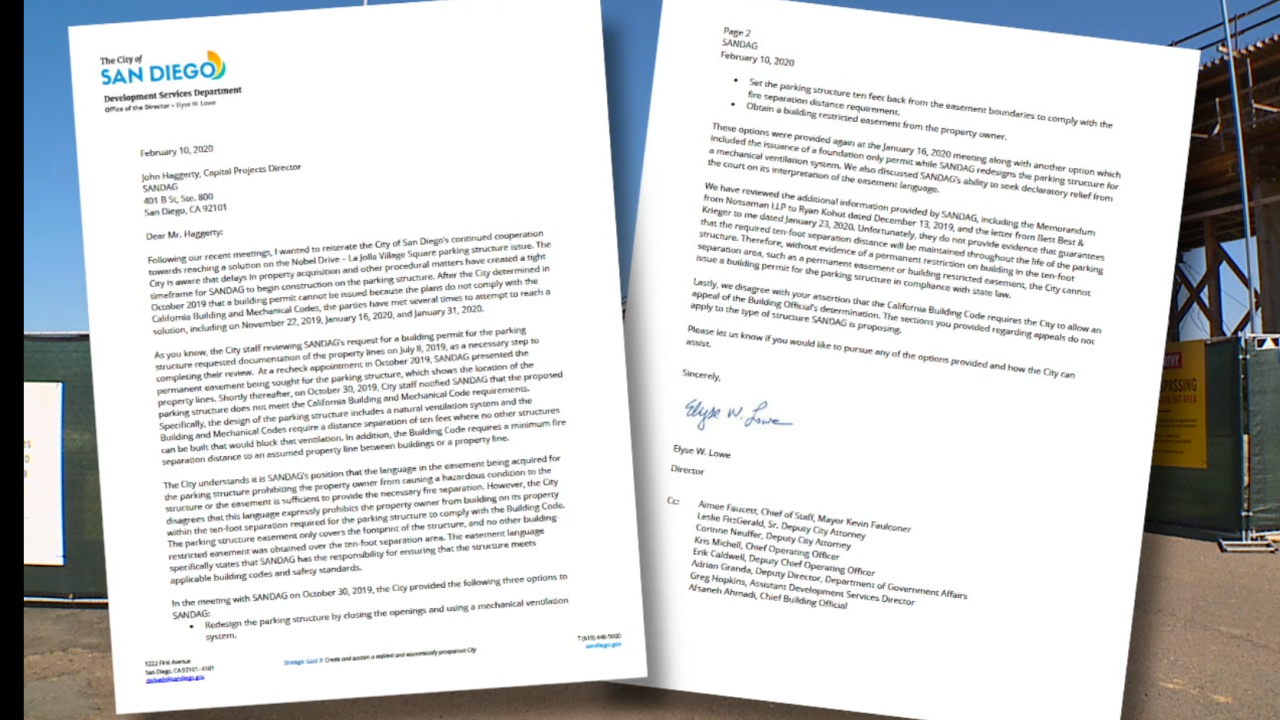 SAN DIEGO (KGTV) - A $2 billion trolley extension in San Diego just hit a roadblock that could delay the project and drive the price tag even higher.

Team 10 discovered the building permit for the Nobel Drive – La Jolla Village Square parking structure was not approved. The project development is being led by the San Diego Association of Governments (SANDAG).

According to a letter sent from the City of San Diego to SANDAG, "The City determined in October 2019 that a building permit cannot be issued because the plans do not comply with the California Building and Mechanical Codes."

The letter stated that the design of the parking structure includes a natural ventilation system, and the Building and Mechanical Codes require a distance separation of 10 feet where no other structures can be built that would block that ventilation. It goes on to state that the Building Code requires a minimum fire separation distance to an assumed property line between buildings or a property line.

In a statement to 10News, the City of San Diego Chief Building Official wrote, "The City of San Diego has continuously worked with SANDAG and provided it with several options to incorporate the required fire-separation distance into its proposed Nobel Drive Parking Garage project and achieve compliance with the Building Code. Once the project design meets the building code requirements, a building permit will be issued."

On Wednesday, SANDAG's Chief of Capital Programs Jim Linthicum told 10News the disagreement has nothing to do with the ultimate engineering of the project.

"It has nothing to do with any of the technical, the engineering, the mechanical work inside this parking structure they've all approved that," Linthicum said. "It has to do with a long issue of a setback, and so what we've requested is let us keep on talking and figure this out, but concurrently, let's keep the construction going so that Mid-Coast [Trolley] stays on schedule and on budget."

Linthicum said the City requested a setback from the parking structure. He said the two agencies disagree on what exactly the code says.

"While we're working through this disagreement, we've asked for kind of a conditional or temporary permit to let work continue."

Here's why the parking structure is so important. Beyond the parking spots, it will house some of the signaling and communication hardware that's needed to operate the trolley.

Team 10 investigator Adam Racusin asked Linthicum if this could de-rail the project.

"Absolutely not," Linthicum said. "What this could do is this could delay the opening, and whenever you delay the opening, whenever you delay any mega project like this, it increases cost, and I think most people would understand that. We don't want to delay the opening, and we don't want to have increased cost. We have been working great with all the partners on this project. You know, with the City of San Diego, UCSD, and Caltrans, we've been working great. This, in my view, is just a small hiccup where they don't feel comfortable issuing a temporary or conditional permit."

Linthicum said while they continue talking to the City of San Diego, they want the work to keep progressing.

"SANDAG has the authority under our MOU, our memorandum of understand with the city, to take this on ourselves," Linthicum said. "So we're going to be going to our board of directors later this month asking for that permission to do so."

Linthicum said he's confident the parking structure will be open on time in October, keeping the project on budget and on track.

A spokesperson for SANDAG also sent 10News a statement that says in part, "Throughout the Mid-Coast Trolley project, SANDAG has worked diligently to ensure that all design and construction work complies with California Building Codes and other applicable regulations. SANDAG continues to work through the technical issues raised by City of San Diego with regard to the Nobel Drive Trolley Station parking structure and is optimistic that the requisite building permit will be issued to allow the timely completion of the structure. The Mid-Coast Trolley project will add 11 miles to the UC San Diego Blue Line Trolley, extending service from the Santa Fe Depot in Downtown San Diego north along the I-5 corridor to the University community. The project is over seventy percent complete and remains on schedule."