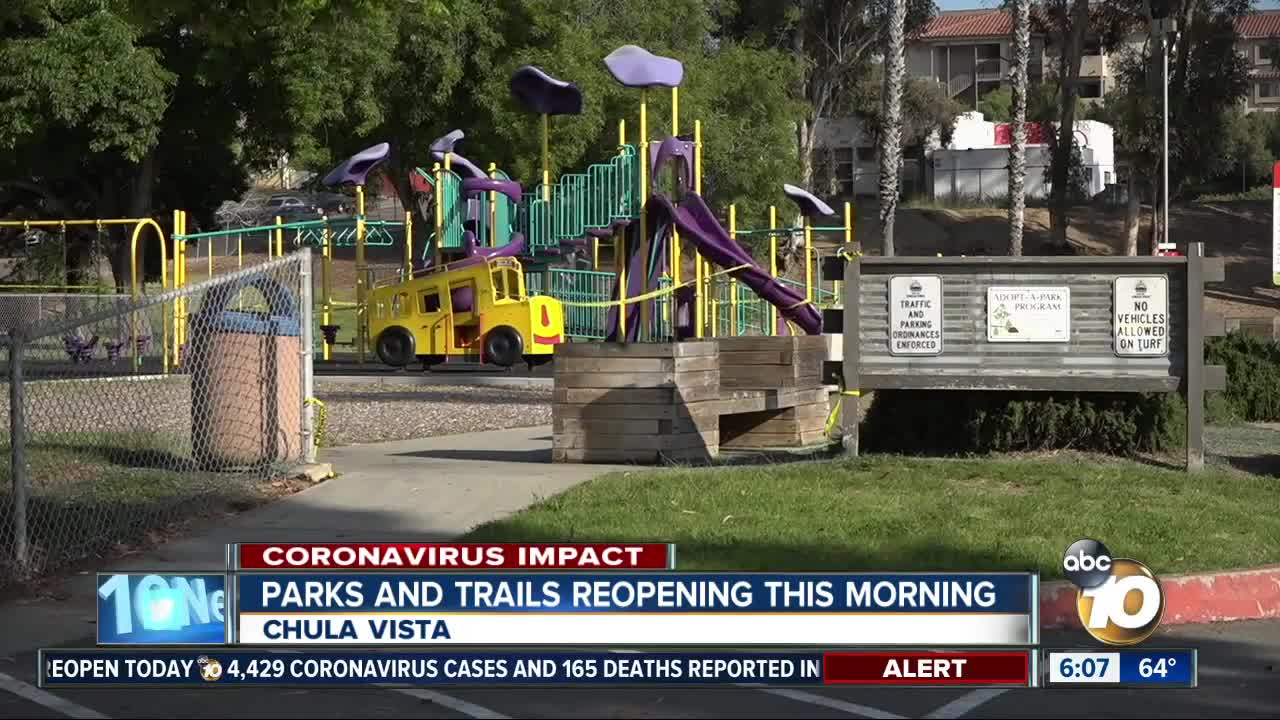 Chula Vista is reopening its parks and trails, but strict rules remain in effect.

Earlier in the week, Chula Vista City Manager Gary Halbert said parks and trails would be opened under “passive uses” -- which include jogging, hiking, bike riding on paths and trails, standing or sitting on the grass, and the use of off-leash dog parks.

Parking lots at city parks and trails are also open.

Face coverings will be required and social distancing of at least six feet applies at all locations. Members of the same family or household will be allowed to congregate up to a maximum of 10 people.

The Chula Vista Golf Course on 4475 Bonita Road also reopened Friday morning. Players will get their temperatures checked before tee-off and must follow social distancing rules. The driving range will remain closed.

No organized or team sporting activities, and no gathering or congregating in groups of more than one will allowed. Picnics are also not allowed and Halbert is discouraging people from creating trash.

"We don't want to have trash left behind, especially if somebody happens to be ultimately testing positive, we don't want to be picking up trash that may be impacted," he explained.

"We don't have the staff to be able to go out and keep those sanitized within every two hours, which is what the requirements will be," Halbert said.

Chula Vista resident Jeff Harper-Harris visited a city park Friday morning, and when asked about the new rules in place, he told 10News, “Everything has changed, normal is no longer normal no more. So whatever safety precautions we need to do, for me, that’s good.”

Chula Vista, the county's second largest city, is among the hardest hit by the pandemic. Chula Vista's number of confirmed cases are approaching 600, about 15 percent of the county's 4,100 total cases.

"Chula Vista is very densely populated, and it is geographic," Dr. Wilma Wooten, San Diego County Public Health Officer said, at Thursday's County press conference. "There are a lot of individuals that live in that area, so you would expect a larger number of cases coming out."

"When you're in the parks or you're on the trails, do try to stay six feet apart," Halbert said. "Don't go to a park if you're running a fever, if have a cough, if you feel ill, don't head to a park."