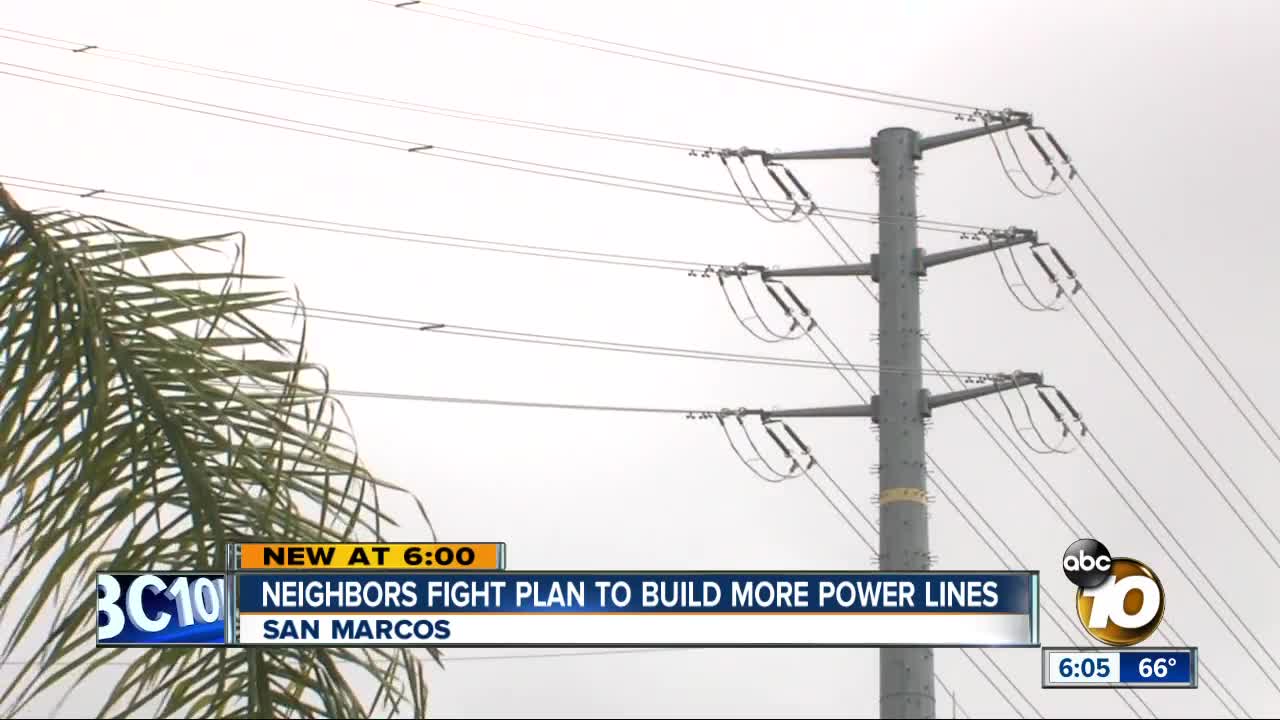 San Marcos residents are fighting against SDG&amp;E's plan to install more power lines in neighborhoods, in an effort to address an expanding population.

SAN MARCOS, Calif. (KGTV) -- People in San Marcos are fighting a plan by San Diego Gas and Electric to build more power lines near their homes.

The project includes rebuilding, replacing and adding nearly 3 miles of new lines through Rancho Dorado and San Elijo Hills. New transmission lines would be built between existing substations in San Marcos and Escondido.

According to SDGE, there is increased demand on power lines due to population growth over the last decade in San Marcos and Escondido.

Kathryn Ericsson moved into her home on Sea Island Place in Rancho Dorado just over a year ago.

There is already a set of power lines close to homes in the neighborhood.

" Our concerns are the CPUC is going to just go ahead and rubber stamp this without really looking at the project. We want an EIR, an Environmental Impact Report," said Ericsson.

The California Public Utilities Commission has tentatively approved the project, but the public comment period runs until the end of the month.

Neighbors want the utility to consider putting some of the lines underground.

"I was very concerned with the dynamite blasting they intend to do, the helicopter stringing of the power lines with the increased fire risk," said Ericsson.

Robert Pack has lived in the neighborhood for nearly 20 years. He's watched as power lines changed the look of the area.

"This is what it used to look like, there's the top of the wooden power lines," said Pack as he showed pictures of the neighborhood, "Now, they replaced with these giant steel towers and now they are proposing putting in another set of steel towers between this steel tower and this home," said Pack.

SDG&E says the project will add more capacity to accommodate the increased need for power, but Pack believes demand is changing.

The CPUC will take public comment on the issue until May 30th. Neighbors are hoping to get the backing of San Marcos City Council during its next meeting on Tuesday.