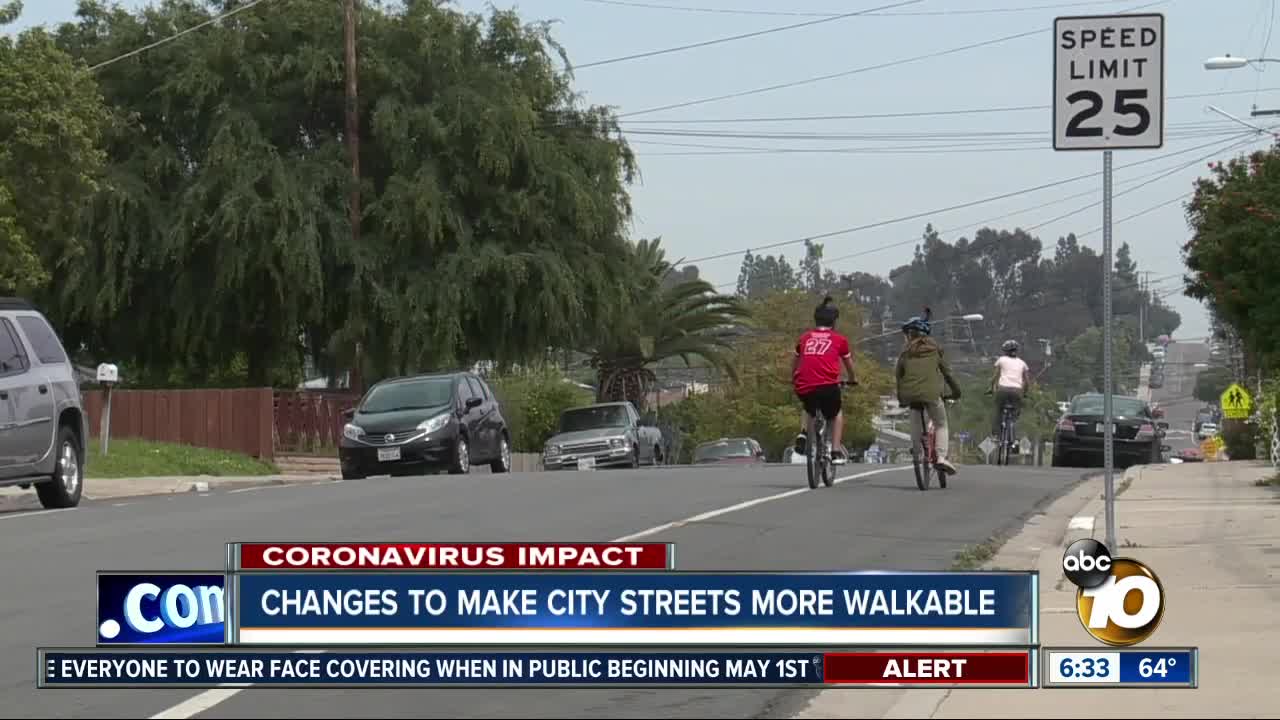 The City of San Diego's "Slow Streets" program will make roadways better for those who walk or bike.

SAN DIEGO (CNS) -- Stretches of four streets in San Diego will be closed to vehicle traffic beginning Thursday to increase walking and cycling space, allowing residents to get outside while maintaining social distancing during the COVID-19 pandemic.

The initial set of streets in the "Slow Streets" pilot program are Diamond Street from Mission Boulevard to Olney Street, Adams Avenue over Interstate 805 and Howard Avenue from Park Boulevard to 33rd Street along with a street in District 4 which has not been finalized, Mayor Kevin Faulconer said.

Temporary barriers and signage will mark the closures.

Faulconer said he will work with the City Council to identify additional streets for inclusion in the program.

Certain crosswalk buttons will be replaced with larger buttons to allow pedestrians to use their arms or elbows, rather than hands and fingers, to press the buttons, with a goal of reducing pedestrian contact with potentially contaminated surfaces.

"COVID-19 has forced us to rethink everything we do and how we go about our daily lives, and what we need right now are more safe spaces for San Diegans to stretch their legs with a walk or a bike ride," Faulconer said.

"This pilot program is about creating more space outside your place by closing a few streets to give people room to be active and maintain their physical distance from others trying to do the same."

The announcement comes amid recent city efforts to loosen public health orders regarding outdoor excursions, including a select number of city parks reopening last week and beaches reopening on Monday, both for limited use.

"These changes, I think, are going to help what we're continuing to do, which is to methodically reopen our city in a safe and responsible manner," Faulconer said.

While vehicle traffic has seen a major reduction since stay-at-home orders went into effect, biking has increased and some areas of the city have seen more than 1,000 pedestrian daily trips.

Councilwoman Jennifer Campbell said that while the coronavirus outbreak has had a massive negative impact on many city residents, there were silver linings with regards to San Diego's environmental future.

"By expanding street access for pedestrians and bikes, while not impeding residential and emergency access, we can move about more safely and the city can study long-term opportunities for our environment," Campbell said.