San Diego Supes pass ordinances to crack down on vaping 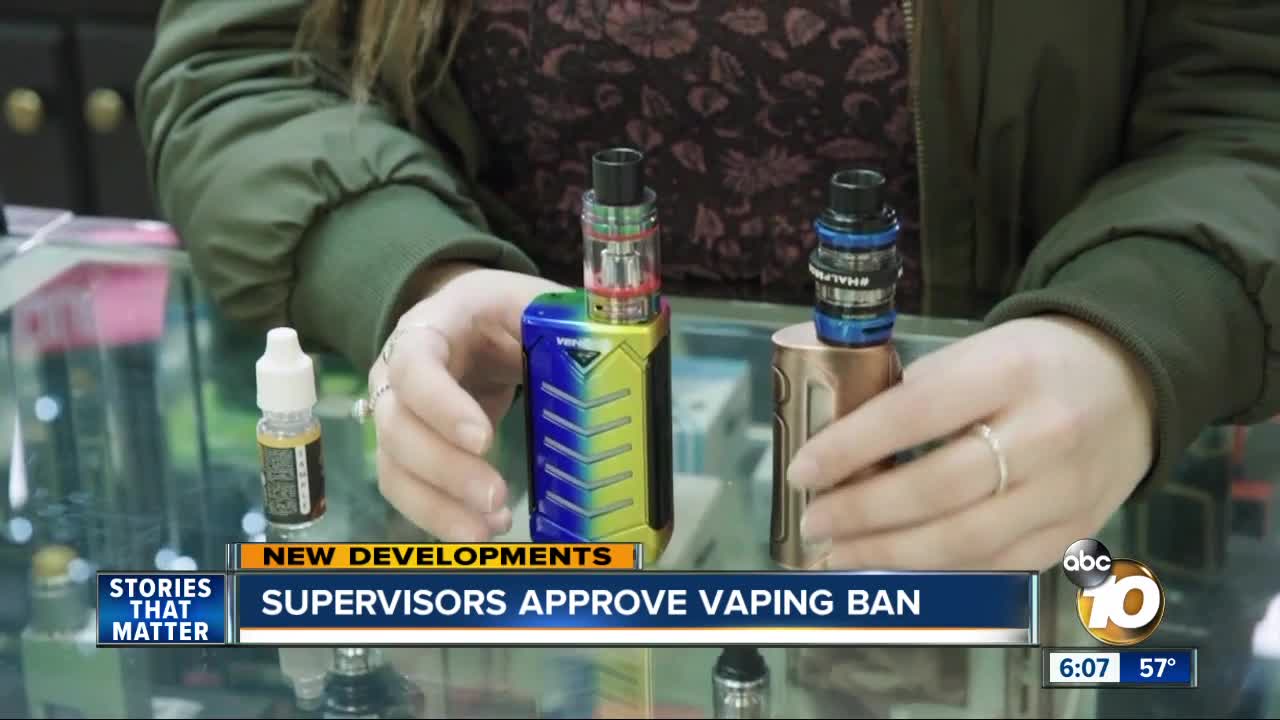 The County Board of Supervisors voted to temporarily ban the sale of flavored e-cigarettes and combustible tobacco product in unincorporated areas of San Diego. 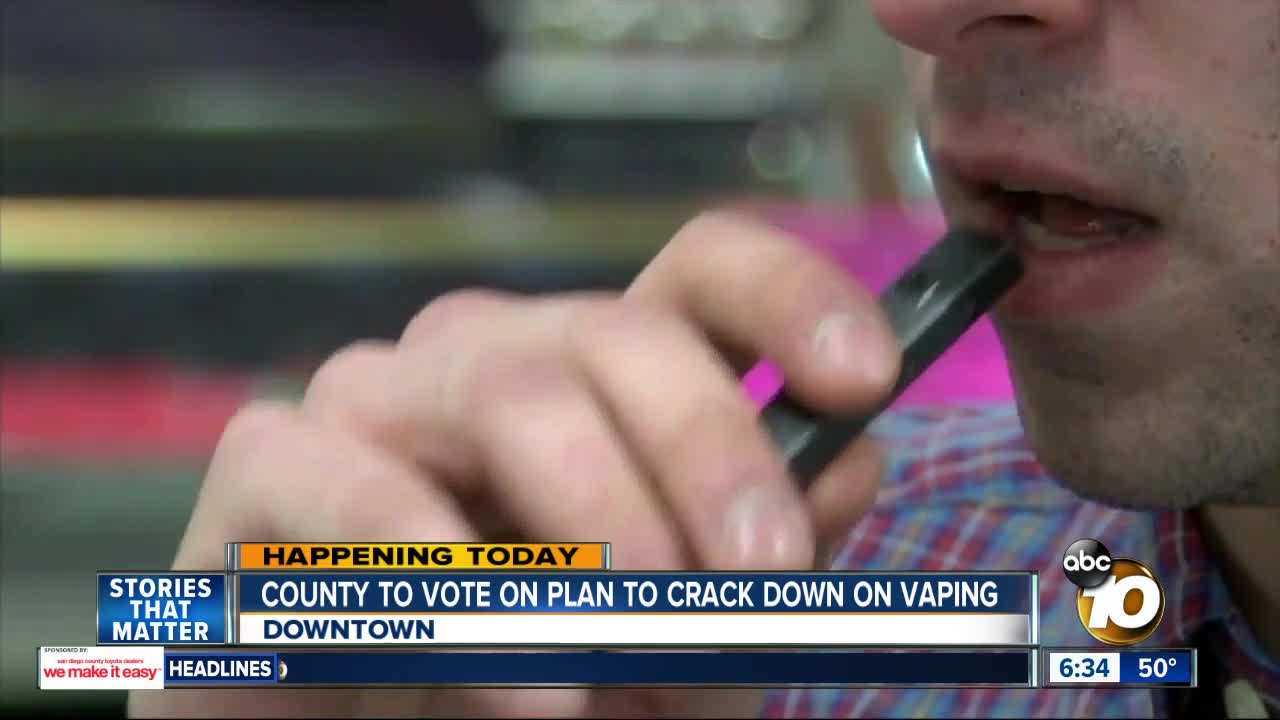 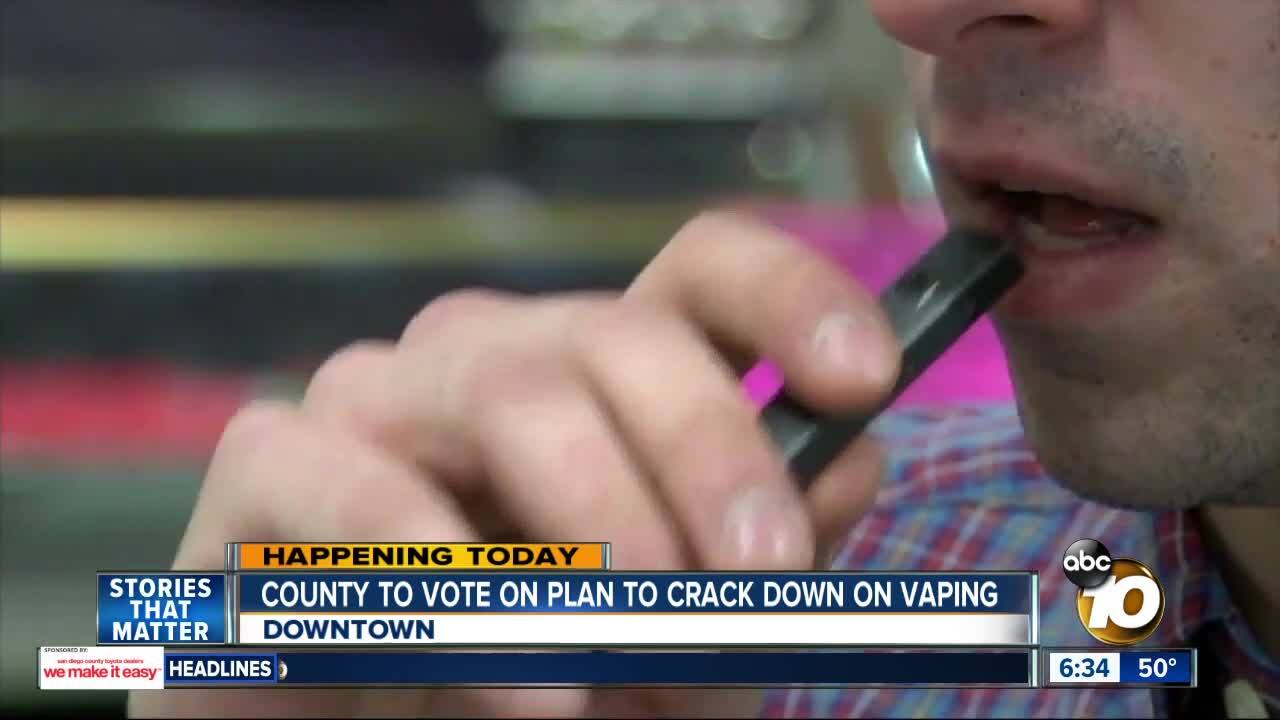 SAN DIEGO (KGTV) -- The County Board of Supervisors voted to temporarily ban the sale of flavored e-cigarettes and combustible tobacco product in unincorporated areas of San Diego.

Supervisors Nathan Fletcher and Dianne Jacob, first proposed the ordinance in October in response to the nationwide epidemic of serious lung injuries linked to "electronic smoking devices, the alarming uptake in e-cigarette use by teens, and the terrible toll of combustible tobacco (cigarettes, cigars, little cigars) on San Diegans."

There have been a reported 43 cases of vaping-related lung injuries in San Diego County. There haven't been any local deaths, but all patients have had to be hospitalized. Those affected range in age from 17 to 70 years old, according to the county.

As stewards of public health, the County has a responsibility to act in the interest of the public health. The ordinances the Board passed today to restrict the sale and use of smoking and vaping products in unincorporated areas of the County will save lives," said Supervisor Fletcher after the ordinances passed. "These actions are a necessary and critical step to protect public health."

The ordinance prohibits the sale or distribution in unincorporated parts of the county of e-cigarette devices and flavored smoking products, including bubblegum, mango, creme brulee, vanilla, menthol and mint.

“It’s critical that we do all we can now to address this nationwide crisis as health experts work overtime to find out what’s behind it,” said Chairwoman Jacob. “With lives hanging in the balance, doing nothing is not an option.”

The board also passed a ban on the sale of flavored tobacco products and a ban on outdoor smoking at restaurants. The proposed policy aims to curb secondhand smoke exposure for restaurant patrons, as well as the service industry employees, by restricting smoking at outdoor areas in unincorporated parts of the county.

San Diego is now among the several dozen counties across the state that have passed ordinances prohibiting or restricting the sale of flavored tobacco products.