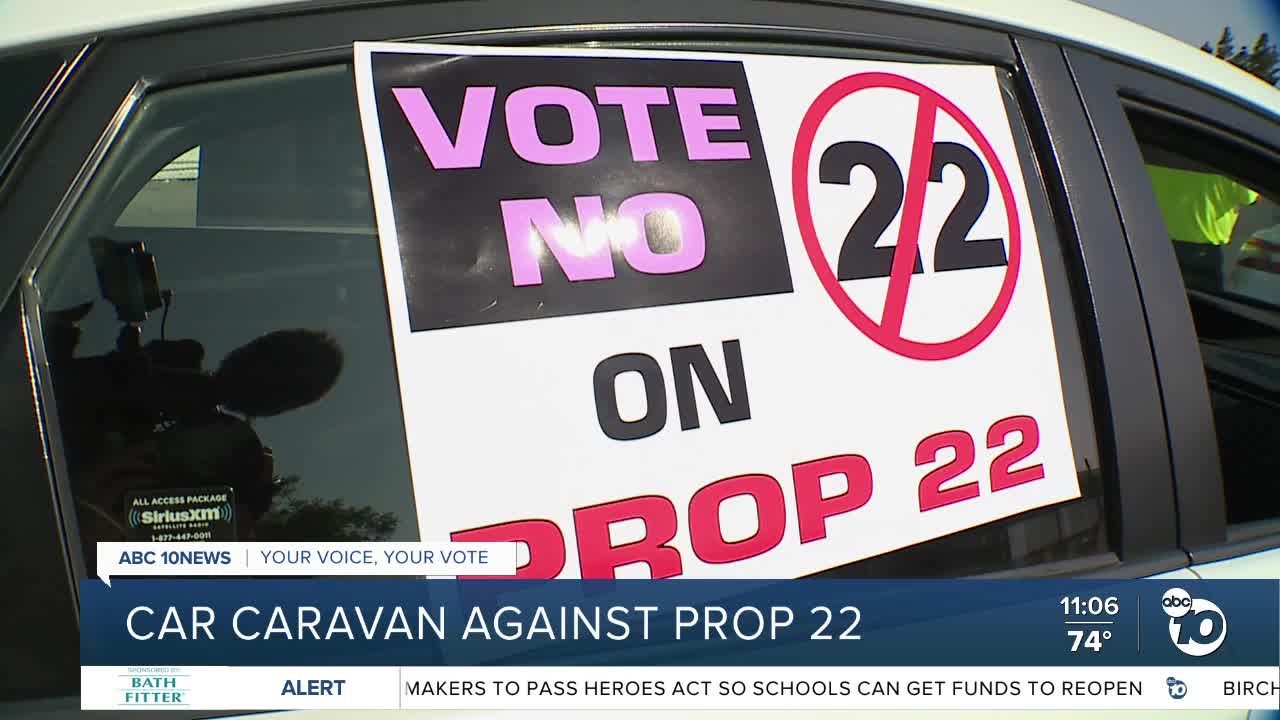 A group of Uber and Lyft drivers hit San Diego roads Friday morning to tell everyone they passed to vote no on Proposition 22.

SAN DIEGO (KGTV) - A group of Uber and Lyft drivers hit San Diego roads Friday morning to tell everyone they passed to vote no on Proposition 22.

Prop. 22 is a ballot measure that would make rideshare and delivery companies exempt from Assembly Bill 5, a new California law that classifies many "gig economy" workers as employees.

AB 5 turns the 2018 state Supreme Court "Dynamex" decision into codified law. It says companies like Uber, Lyft and DoorDash have to classify their drivers as employees and not independent contractors under what's called the "ABC Test" of employment.

That gives the drivers access to protections like minimum wage, unemployment insurance, time off and other protections not usually given to independent contractors.

Prop. 22 would give the drivers some wage protection and health insurance subsidies, but not as much protection as AB 5.

"It strips us of all our rights," Lyft and Uber driver Tonje Ettesvoll said of Prop. 22. "We're talking unemployment, we're talking health benefits, we're talking sick days, family leave. If they win Proposition 22, all those things go out the window."

Ettesvoll organized the car caravan, which went from the rideshare lot at San Diego International Airport to Lyft's San Diego headquarters on Morena Boulevard. About a dozen cars joined her on the road, decorated with signs and stickers urging people to vote no.

At the end of the ride, Ettesvoll and other organizers gave out hand sanitizer and masks to drivers. They say Lyft and Uber don't provide those items, but still expect drivers to clean their cars between each passenger drop-off. Ettesvoll said that's another example of the companies putting profit over people.

According to Ballotpedia, a website which tracks elections, Uber, Lyft, DoorDash and Postmates have spent $110 million combined to support Proposition 22, saying if it doesn't pass, they may have to shut down operations in California.

A court battle over the provisions of AB 5 has been going on all summer in San Francisco, with a judge recently granting an injunction to give the companies time to make a plan for compliance.

Some drivers told ABC 10News they don't like AB 5 and plan to vote for Prop. 22. They worry the new rules would turn them into full-time employees and they'd lose some of their independence and ability to be their own boss.

Ettesvoll and the drivers on Friday hope voters end the debate and force the companies' hands.