San Diego mother of US Army soldier deported to Mexico 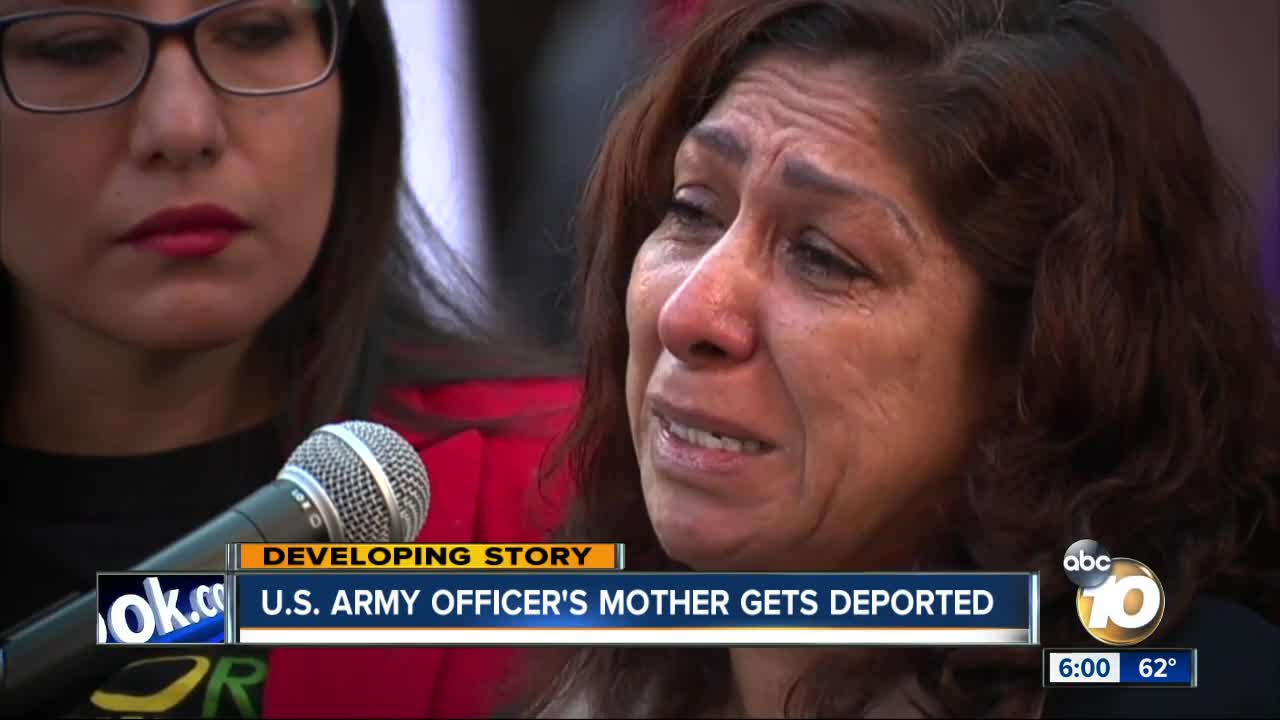 A mother of a U.S. Army soldier was hoping for a miracle that would prevent her from being deported, but she was sent to her native Mexico following a hearing in San Diego. 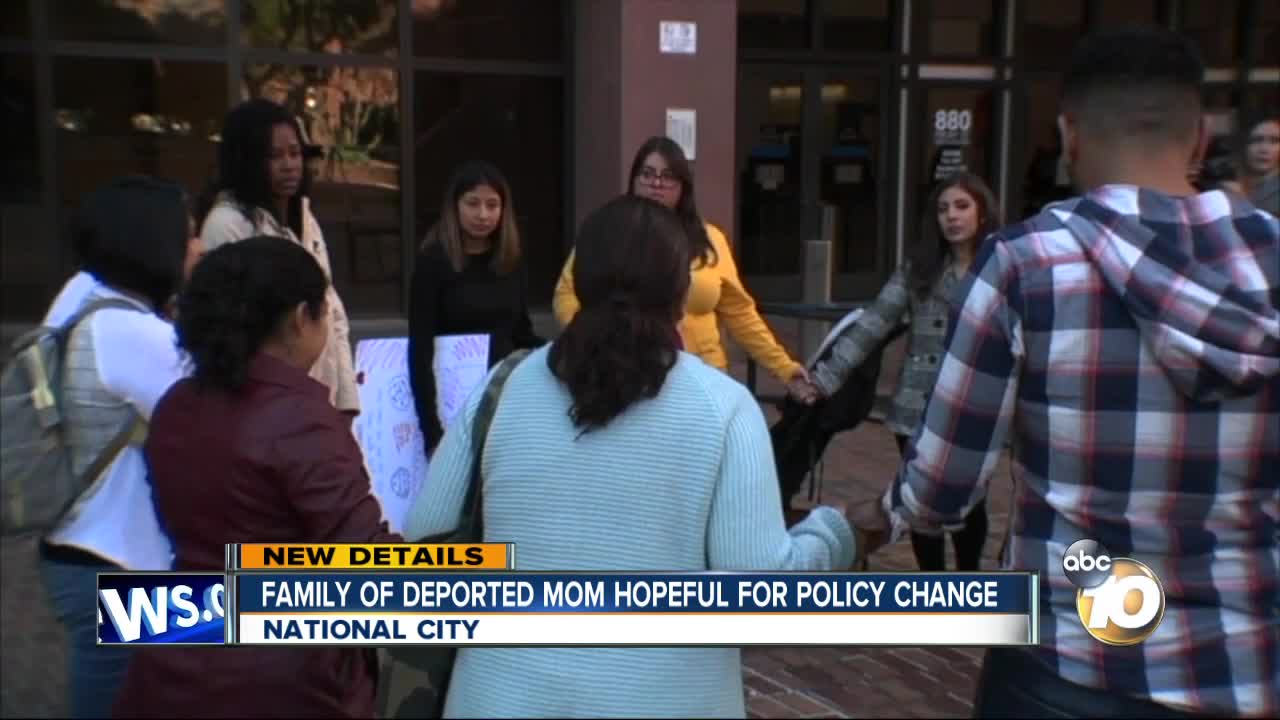 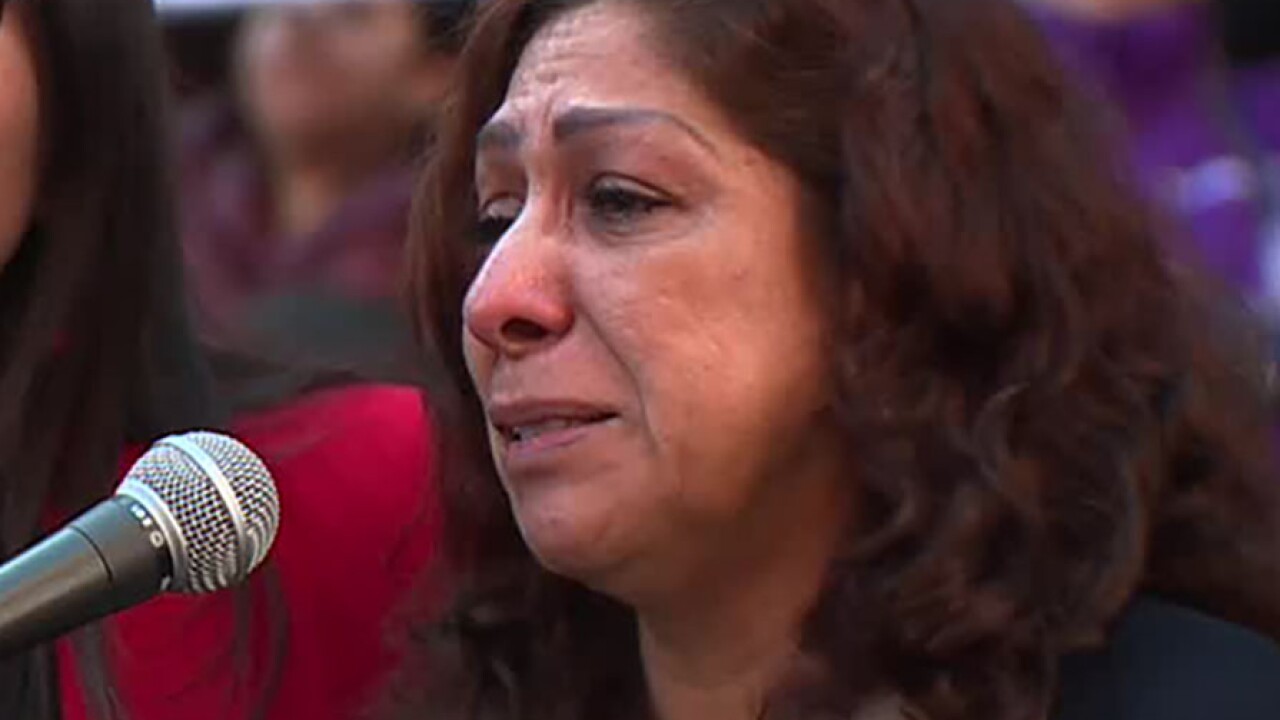 SAN DIEGO (KGTV) -- A mother of a U.S. Army soldier was hoping for a miracle that would prevent her from being deported, but she was sent to her native Mexico following a hearing in San Diego.

According to family members, they did not have a chance to say goodbye and Gomez was deported without any of her personal belongings.

At a rally prior to her hearing before Immigration and Customs Enforcement officials, friends and family members showed their support for Gomez, who has been living in the U.S. for over 30 years but came into the country illegally.

Gomez’s family said she has spent many years trying to fix her status, but her efforts have been denied.

Her son, Gibram Cruz, joined the military in hopes of helping his mother’s situation. He is currently a 2nd lieutenant and serves as an intelligence officer.

“It’s a hard feeling to say goodbye to my mother, putting her in danger, especially when we’ve given up so much for this country. Now, I have to hand her off to ICE to report her where I can’t go because of restrictions due to the military,” Cruz said at the rally.

A tearful Gomez spoke at the rally and pleaded for ICE to show her leniency and overturn the decision to deport her.

Supporters described Gomez as “an exemplary resident of San Diego” who does not have a criminal record, owns a business, pays taxes, and is a mother and grandmother.

Cruz acknowledged that his mother had been deported twice before in the past 25 years.

Family members said Gomez does not have family in Tijuana and they collectively do not know what next steps they will take.

Meanwhile, 10News learned the family is also dealing with another situation -- someone spray-painted a hateful message on their property overnight.

A spokesperson for U.S. Immigration and Customs Enforcement (ICE) sent the following statement in relation to this case.

Rocio Rebollar-Gomez, 51, a citizen of Mexico, reported to ERO today (Jan. 2, 2020) and was removed to Mexico pursuant to a final order of removal. On December 4, 2019, she reported to ERO as requested and was informed all avenues of discretion for her to remain in the United States had been exhausted. She was provided until Jan. 2, 2020 to depart the United States. On May 30, 2008, Rocio Rebollar-Gomez was ordered removed by an immigration judge in San Diego. U.S. Immigration and Customs Enforcement subsequently executed the judicial order and removed her from U.S. to Mexico on June 20, 2009. Rebollar-Gomez later illegally reentered the U.S. at an unknown time/location, which is a felony act under federal law. On March 14, 2018, she was apprehended by the San Diego ICE Fugitive Operations Unit and processed for reinstatement of her removal order. On April 10, 2019, Rebollar-Gomez was granted a stay of removal by Enforcement and Removal Operations (ERO) officers to receive adjudications to her appeals and requests to remain in the United States.

The immigration laws of the United States allow an alien to pursue relief from removal; however, once they have exhausted all due process and appeals, they remain subject to a final order of removal from an immigration judge and that order must be carried out. It stands to follow that the prioritization of immigration fugitives since the inception of ICE emphasizes their arrest and removal because they deliberately ignored a federal judge’s order. Intentionally, failing to carry out final orders of removal is negligence and undermines the entire framework of immigration enforcement, as established by Congress, and renders federal law useless.