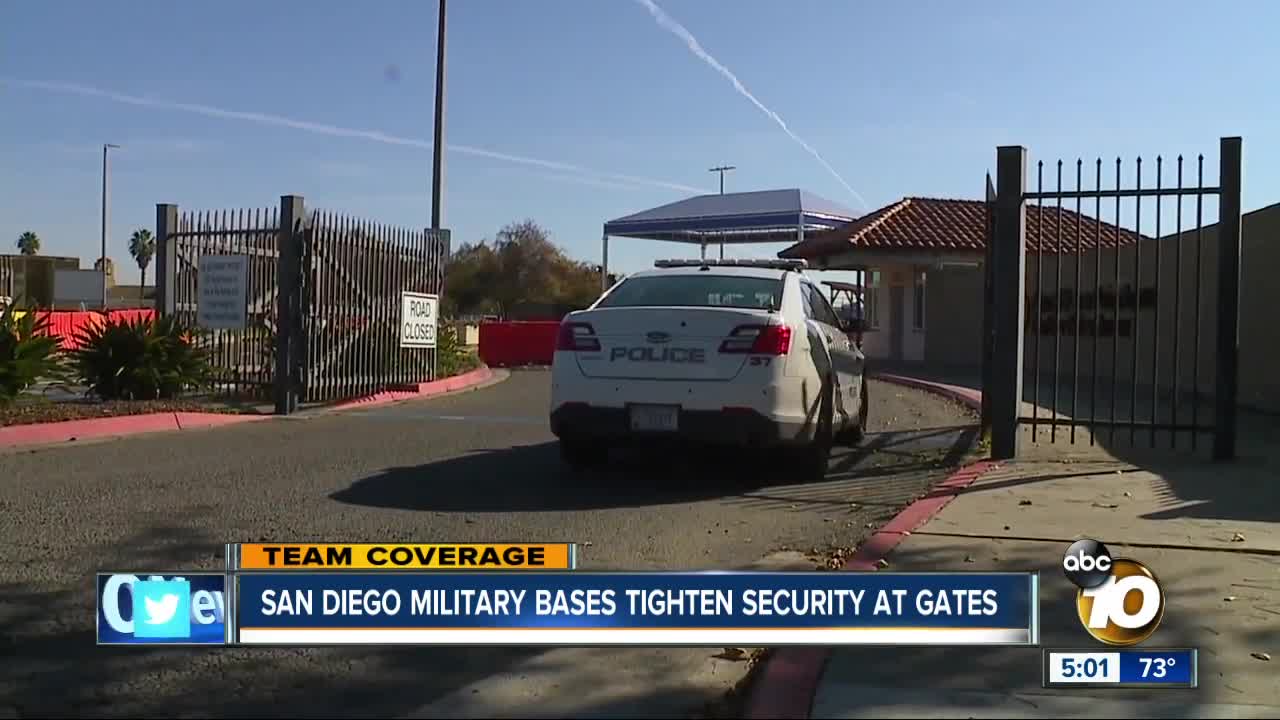 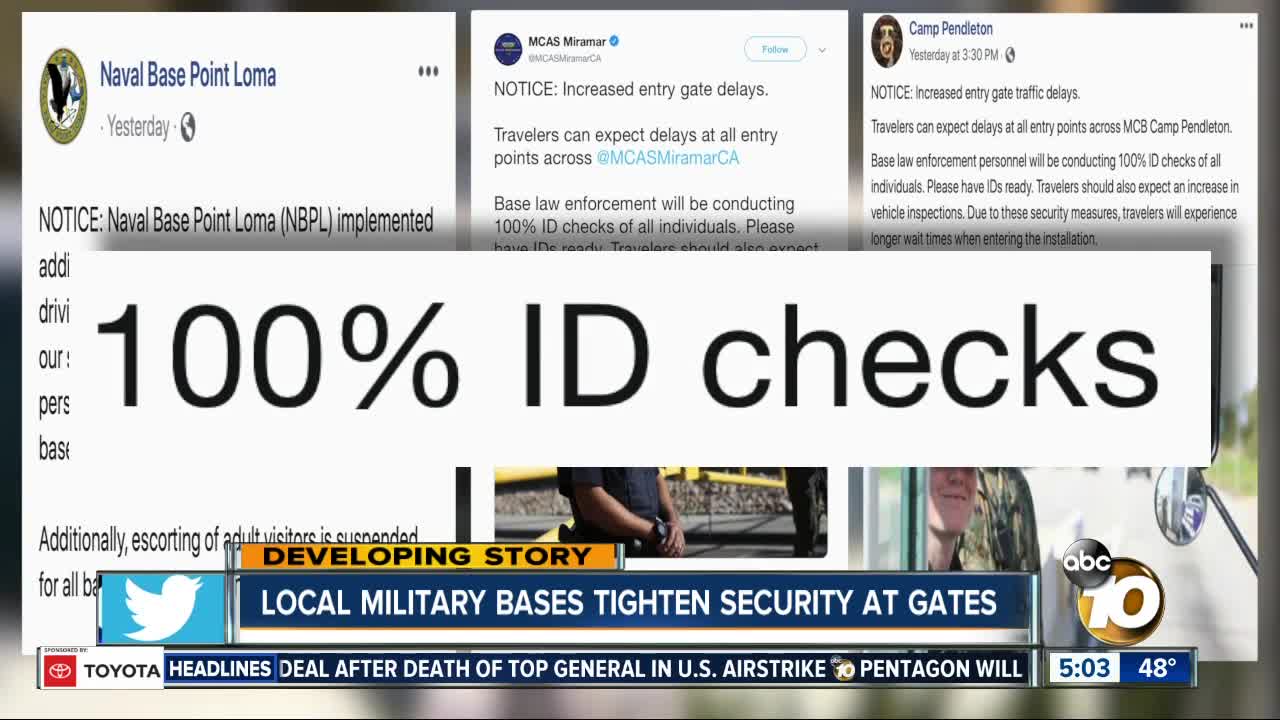 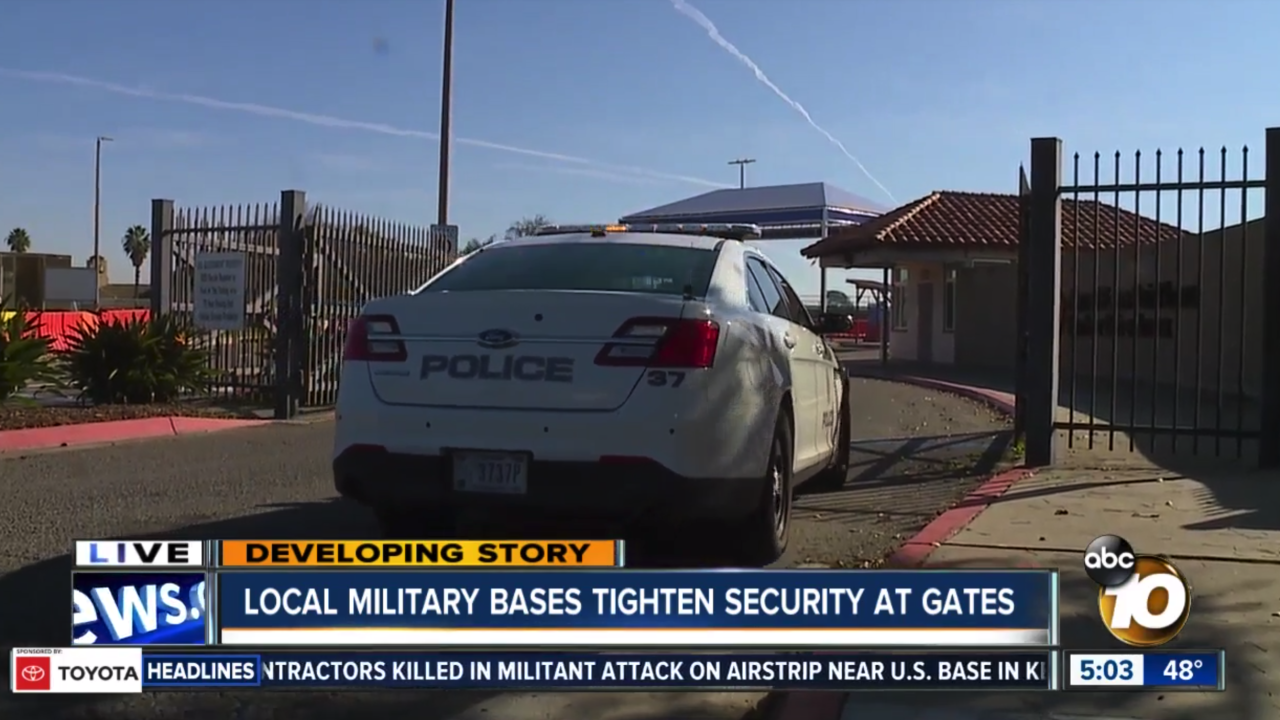 SAN DIEGO (KGTV) -- San Diego County military bases are bolstering security measures amid rising tensions in the Middle East and threats of retaliation against the U.S. after an American drone killed a top Iranian general.

Travelers can expect delays at all entry points across MCAS Miramar, Camp Pendleton and Naval Base Point Loma.

In Point Loma, only those with a military ID will be allowed on base. Adult visitors will be required clearance from the pass office.

Retired U.S. Marine Corps veteran, Mark Daemon, who served in Iraq tells 10News this is something he has seen many times before.

"The bases just act in a prudent manner to just make sure that their security is as aggressive as possible, but so that there isn't a feeling in the community that they're going on alert of causing hysteria," he said.

"While we will not discuss specifics, U.S. Northern Command is implementing additional force protection condition measures to increase security and awareness for all installations in the U.S. NORTHCOM area of responsibility."

"Generally speaking they try to make sure that there aren't patterns with how they man certain things," he said. "There will be increased man power applied to security, but they may change the way you have to enter into the gate."

At MCAS Miramar, military members were encouraged Monday to use the north and west gates during commuting hours.

Iranian Revolutionary Guard Gen. Qassem Soleimani was killed in a U.S. airstrike in Baghdad at the request of President Donald Trump, the U.S. Pentagon said Thursday.

Soleimani’s daughter, Zeinab, directly threatened an attack on the U.S. military in the Mideast while speaking to a crowd in Iran’s capital.

“The families of the American soldiers in western Asia ... will spend their days waiting for the death of their children,” she said to cheers. Iranian state television and others online shared a video that showed Trump’s American flag tweet following Soleimani’s killing turn into a coffin, the “likes” of the tweet replaced by over 143,000 “killed” with the hashtag #severerevenge.

THE ASSOCIATED PRESS CONTRIBUTED TO THIS REPORT