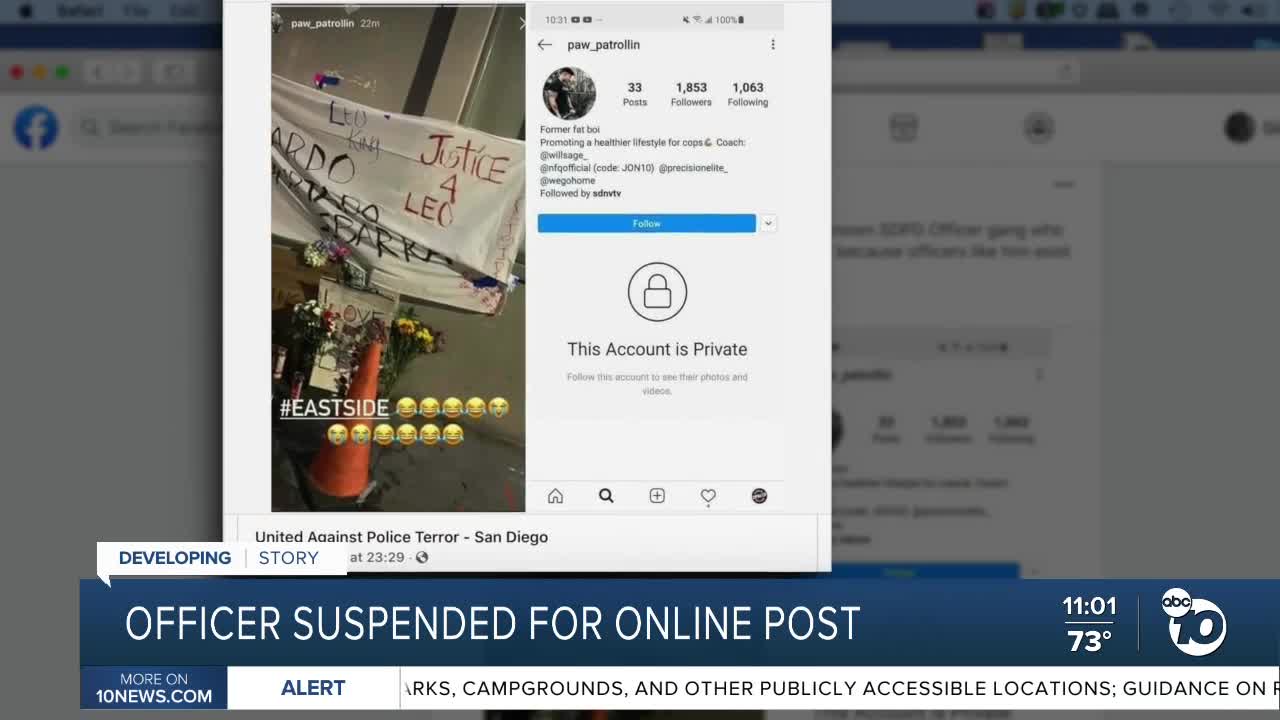 A San Diego police officer was suspended by the department over a social media post regarding a memorial made for a man he shot this past summer.

SAN DIEGO (CNS) - San Diego Police Chief David Nisleit Tuesday promised a thorough investigation into allegations that one of his officers uploaded a social media post mocking a roadside memorial for a robbery suspect fatally shot three months ago by that lawman and a patrol partner.

"I am shocked and disturbed by the reports of this officer's conduct," the chief said about the post, in which emojis of laughing and tearfully wailing faces were superimposed over a photo of the makeshift tribute to Ibarra at the site where he was shot.

"The officer's alleged actions fall short of the high standards I and our community have for the San Diego Police Department," Nisleit said.

Late on the afternoon of June 27, Lucas and Officer Tevar Zaki opened fire on Ibarra, a suspect in a recent robbery, when he allegedly pulled a revolver from his waistband and pointed it at them as they approached him in the 1200 block of Sixth Avenue in the Core-Columbia district.

Ibarra succumbed to his gunshot wounds in a hospital two days later.

The shooting prompted demonstrations by protesters alleging a culture of excessive use of force and racial bias on the part of the San Diego Police Department.

"I want to apologize to the Ibarra family," Nisleit said. "This unnecessary act only reopens wounds during an already painful time."

In addition to placing Lucas, a four-year member of the SDPD, on unpaid leave, Nisleit revoked his police powers pending completion of the in- house probe into the matter.

"I want to assure our community that I do not take these allegations lightly," the chief said. "Officers take an oath to protect and value all life. And ... I clearly understand this is a critical time in relationships between law enforcement and the communities that we serve. I want to send a clear message that this behavior is not acceptable in the San Diego Police Department and does not reflect the values of the men and women of this department."

Nisleit also pledged to be "transparent with our findings" that result from the internal investigation, though he acknowledged that state law protecting the privacy of police personnel might prevent a full disclosure of any punitive actions -- including, potentially, job termination -- ultimately taken against the accused officer.