SAN DIEGO (KGTV) - Parents throughout the San Diego Unified School District have mentioned their concerns over the amount of time given to students for lunch breaks.

One parent sent 10News a bell schedule they received for Ericson Elementary School in Mira Mesa, pointing out an allotted 15 minutes for each grade to eat lunch, with another 15 minutes for recess. 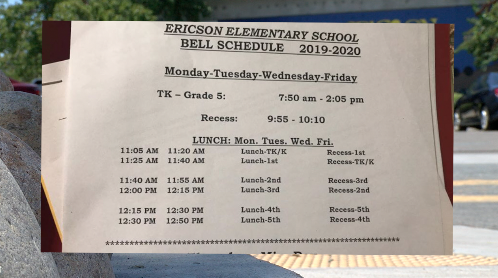 10News spoke to parents at the school on Tuesday, and some said it's an issue they've gotten used to over the years.

10News took that concern to the district, and a spokeswoman said the full lunch period is 35 minutes but includes time for recess. They say there's no specific breakdown on how many minutes should be spent on lunch or recess, and that it's up to the child.

The district also sent 10News federal guidelines that stated schools must offer lunch between 10 a.m. and 2 p.m. and an adequate amount of time for lunch to be served and eaten.

According to the district, that adequate amount of time in elementary schools is least 20 minutes after sitting down to eat lunch:

"Per the information previously sent, district lunchtimes include recess as part of the allocated time for lunch. Though it shows recess is included, the schedule you sent does not specify how much time is allowed for recess. The full lunch period is 35 minutes, and is a flexible schedule whereby two grade levels rotate lunch (eating) and recess. Children can eat lunch anytime during the period that is dedicated to lunch/recess."