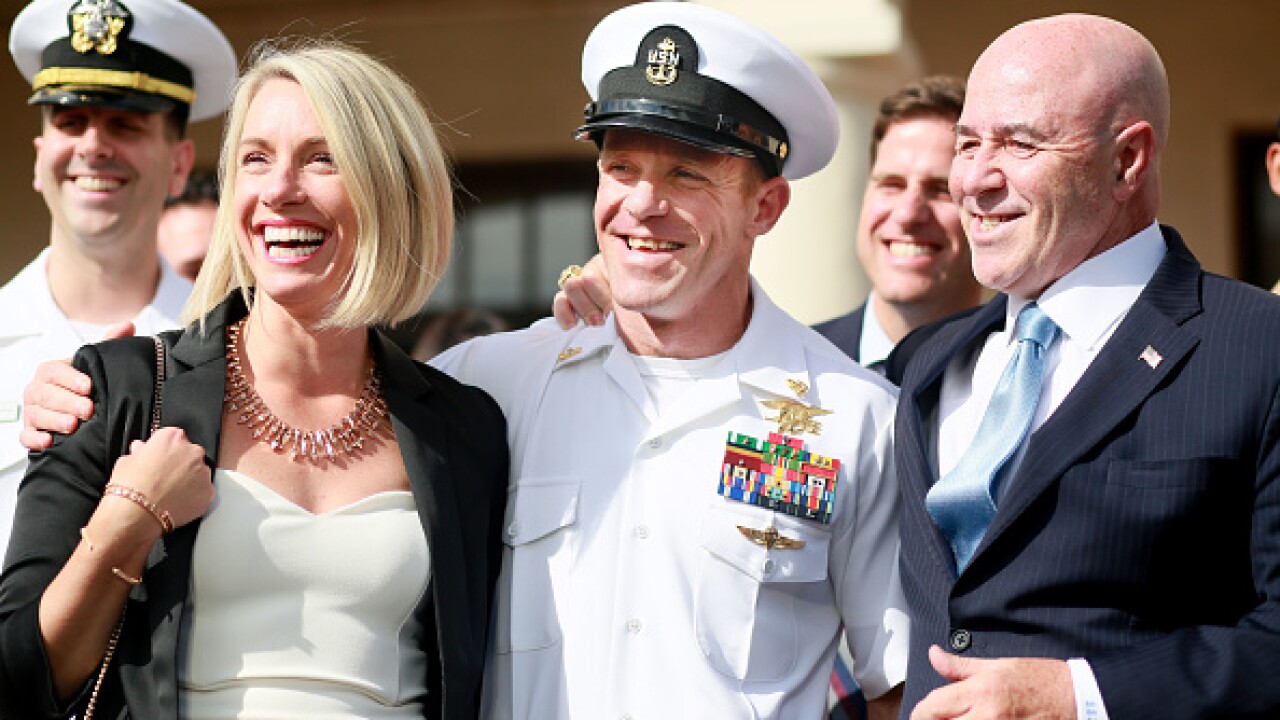 Sandy Huffaker/Getty Images
SAN DIEGO, CA - JULY 02:R, Navy Special Operations Chief Edward Gallagher celebrates with his wife Andrea after being acquitted of premeditated murder at Naval Base San Diego July 2, 2019 in San Diego, California. Gallagher was found not guilty in the killing of a wounded Islamic State captive in Iraq in 2017. He was cleared of all charges but one of posing for photos with the dead body of the captive. (Photo by Sandy Huffaker/Getty Images)

(CNN) -- Defense Secretary Mark Esper and Joint Chiefs Chairman Gen. Mark Milley have raised serious concerns with the White House in the last 48 hours after President Donald Trump signaled he would block the Navy from ejecting Eddie Gallagher from the SEALs, an administration official told CNN.

"There is extreme concern over decision making being pulled from the Navy," one administration official told CNN Saturday in reaction to Trump's Thursday tweet that "the Navy will NOT be taking away Warfighter and Navy Seal Eddie Gallagher's Trident Pin." The Trident Pin, which is worn by Navy SEALs, is awarded following their completion of an intense qualification course and symbolizes membership in the elite military community.

As of Saturday afternoon, a review of Gallagher's status was expected to proceed. That review is considering whether he should be able to continue as a SEAL or be expelled, according to one defense official.

Gallagher had been demoted after being found guilty of posing for a photo with the dead body of an ISIS casualty in Iraq. He had faced a court-martial for premeditated murder and attempted murder, but was acquitted.

On Thursday, the President tweeted that he wouldn't let the Navy punish Gallagher.

Navy Secretary Richard Spencer on Saturday denied a New York Times report that he had threatened to resign or be fired if the President stopped the military from removing Gallagher from the elite group. Spencer was asked to respond to the Times report during a session at the Halifax International Security Forum in Nova Scotia, Canada.

Spencer joked that he was there to talk about the Arctic, prompting laughter from the crowd, then denied the New York Times report outright, saying, "Contrary to popular belief, I am still here. I did not threaten to resign."

"We're here to talk about external threats, and Eddie Gallagher is not one of them," Spencer said.

The New York Times also reported that Rear Adm. Collin Green had made threats to resign or be fired.

The official told CNN Saturday that the Pentagon is strongly urging the White House to let military discipline measures run their course without interference, meaning that military officials want to be able to make the decision about Gallagher's fate without the President weighing in.

However, military officials acknowledge the President has the right as commander in chief to issue orders on military justice matters.

A Navy official told CNN Friday that following Trump's tweet, the Navy had paused proceedings against Gallagher until additional guidance was provided by the White House.

A spokesperson for Spencer told CNN that his comments were in line with previous statements the secretary has made about supporting his commanders.

Gallagher's lawyer, Timothy Parlatore, has said that the Navy's decision to order the review of Gallagher's status was part of an effort to push back against Trump's earlier decision to restore the SEAL's rank. Parlatore has slammed the Navy's leadership, particularly Green who had ordered the review board.

Green ordering the review "crossed a very dangerous line, having our uniformed flag officers being directly defiant of our commander in chief," Parlatore told CNN Thursday.

Before the President acted earlier this month, Esper and other senior military leaders had warned Trump that his intervention could damage the integrity of the military judicial system, the ability of military leaders to ensure good order and discipline and the confidence of US allies and partners who host US troops.