In-Depth: When will we get final election results 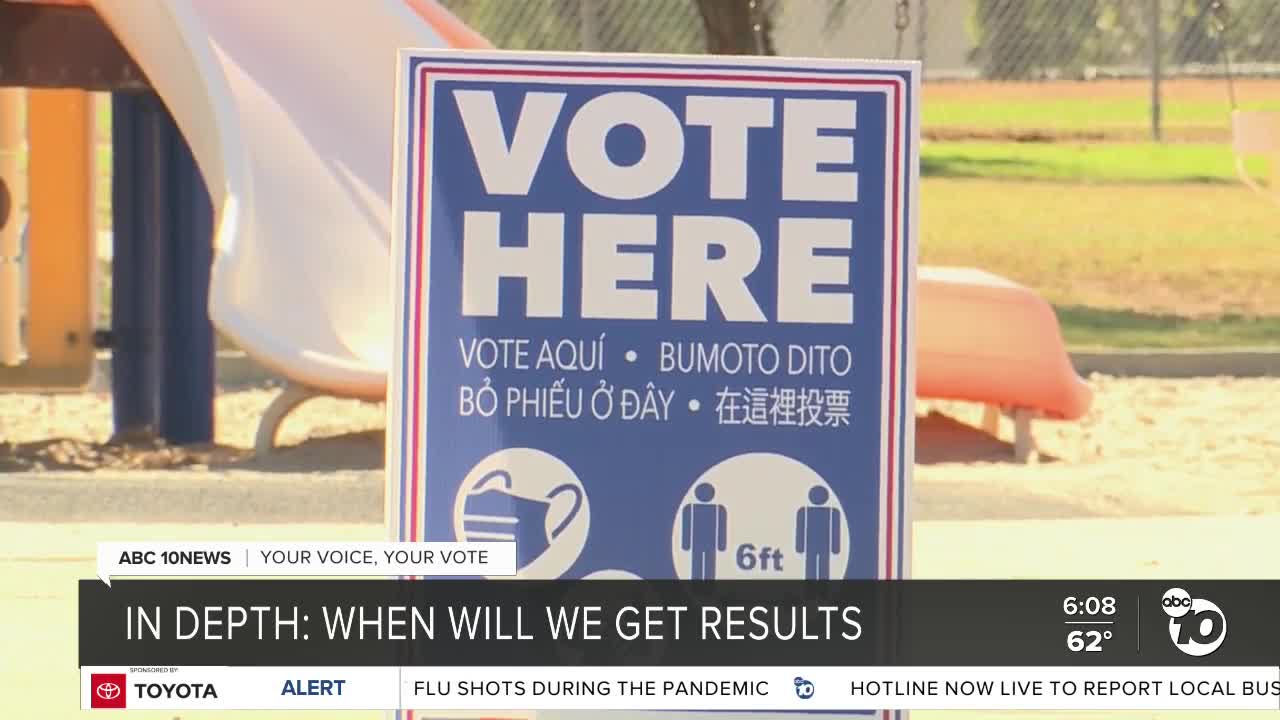 SAN DIEGO (KGTV) - By the time polls close Tuesday night at 8 p.m., the San Diego County Registrar of Voters could have already processed more than 1.1 million ballots. Registrar Michael Vu says it's possible the first results of the night, released sometime before 9 pm, could account for up to 70% of the total vote.

Those numbers will include more than a million mail-in ballots that the Registrar has already received and processed, as well as any in-person votes cast between Saturday and Monday.

But those early numbers may not provide clarity.

"In our world, nothing is over until the election is certified," says Vu.

Certification doesn't happen until December 3. And mail-in ballots can still arrive at the Registrar's office as late as November 20th to be counted, as long as they were postmarked by November 3.

"There's 196 contests on the ballot," says Vu. "For some it will show really wide gaps. And in others, it will show like it's neck and neck and it will continue all the way through until we certify the election."

For races that may be close, like the San Diego Mayor's race, those late arriving ballots could be the difference between winning and losing.

"When you have such a close race at the local level, 10,000 or 20,000 votes left to be counted could be quite significant," says Evan Crawford, Assistant Professor of Political Science at University of San Diego.

Crawford says it's common for local races to have changes after election day, noting that early results aren't official until every ballot is counted.

"We might have to prepare ourselves to not know on election night," says Crawford.

He points to the June Primary election for Mayor, where City Councilman Scott Sherman led Barbara Bry for the second spot in the November election. As more ballots went into the final numbers, Bry overtook Sherman to advance.

Thad Kousser, the Political Science Department Chair at UC San Diego, says voters should use patience when looking for a clear winner.

"Even though the game ends on election night when the polls close, no one can cast a ballot after that, it's going to take a while to tally the points for both sides," Kousser says. "And those results are also going to be misleading because there were really strong partisan differences this year in who wants to cast a ballot through what means."

That extends to the Presidential race as well. Kousser says states that process mail-in ballots early, like Florida, could see a large Democratic lead in the first round of numbers released. He says Republicans have traditionally preferred to vote in person.

Conversely, Kousser says states like Pennsylvania, where mail-in ballots can't be processed until polls close, may see the opposite.

Either way, both Kousser and Crawford say accuracy is the most important focus of election officials.

"Getting it right is more important than getting it quickly," says Kousser. "And making sure that no one claims a quick victory, when a close margin could be overturned by legitimate votes that have a right to be counted."

"We have these local election officials," says Crawford. "They're doing the job. They're doing the work. At a certain point, we just have to remind ourselves of that and have some trust in that."