Hundreds without water since Thursday in Allied Gardens 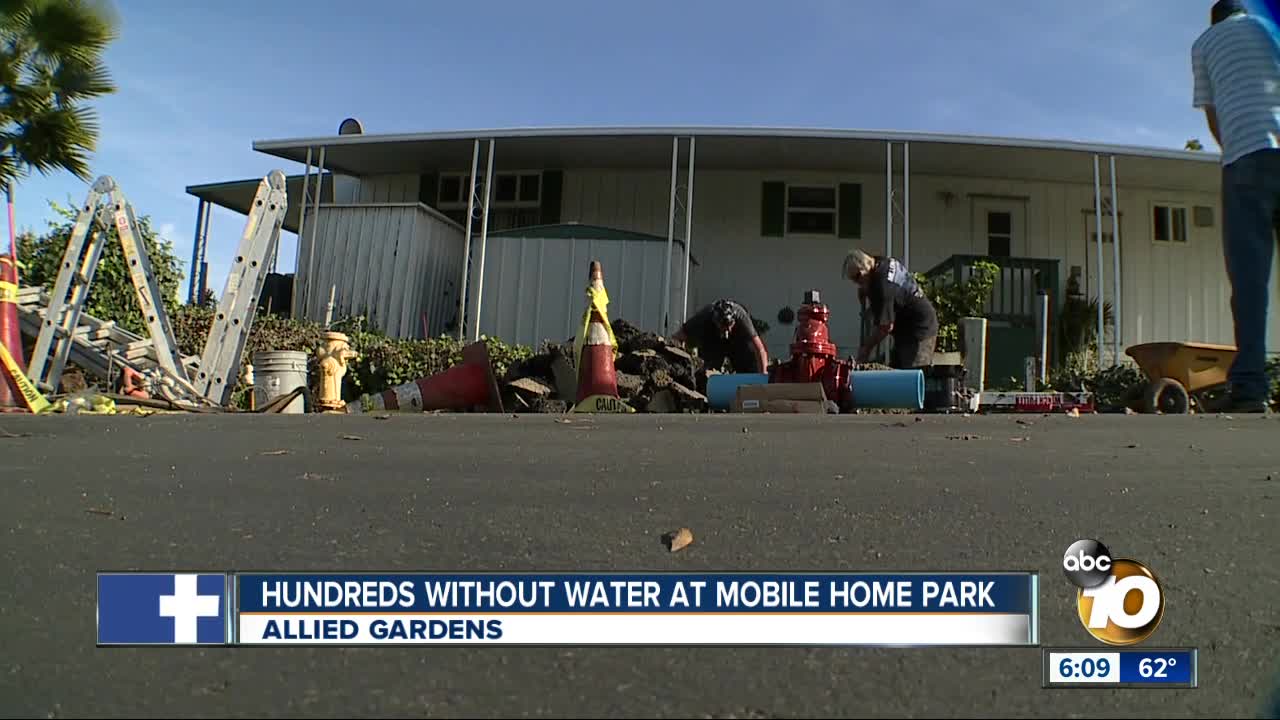 Hundreds without water since Thursday in Allied Gardens

SAN DIEGO (KGTV) — Hundreds of residents at “The Cliffs” mobile home park in Allied Gardens are fed up after living without running water since Thursday. The community consists solely of 55+ senior citizens, and many of them live alone or have limited mobility.

"It's really kind of a pain in the neck,” 85-year-old resident William Shakespeare said.

Like many of his neighbors living in the lower portion of the Cliffs, Shakespeare lost water since early Thursday. Luckily for him, his longtime girlfriend Suiko Paul is quite mobile. She became the go-to person for water supply for the entire street.

"Elderly people live here. They don't drive. Somebody has to help them,” Paul said.

She was been swamped. "She hauls water like crazy,” laughed Shakespeare.

10News met the on-site property manager as he and two others were digging a hole in the asphalt.

He stepped away from the camera to tell us two old pipes burst on opposite ends of the mobile home park Thursday morning.

Since then, he said he had been doing everything he can to fix the problem.

But residents like Shakespeare and Paul did not want to see three people trying to fix a major water leak problem affecting more than 200 residents.

"He's been here since Thursday, and they've been digging, but they're not sure where they're digging,” Shakespeare said.

Many residents appreciated that the manager was trying to handle the problem himself, but they said it had gotten out of control. Like many of her neighbors, Paul said she had not taken a shower for four days, and she had gone to a friend’s house to wash dishes.

The Red Cross began mobilizing at the clubhouse and doing door to door well-fare checks. But for many of the seniors, patience is running out.

"It seems like forever…. Not having water, I don't know what could be worse. Not having air, I guess,” Shakespeare said.

The city is aware of the problem. But because the pipes are under private property, the owner of the entire mobile home park must have them fixed themselves before the city can turn the water back on.