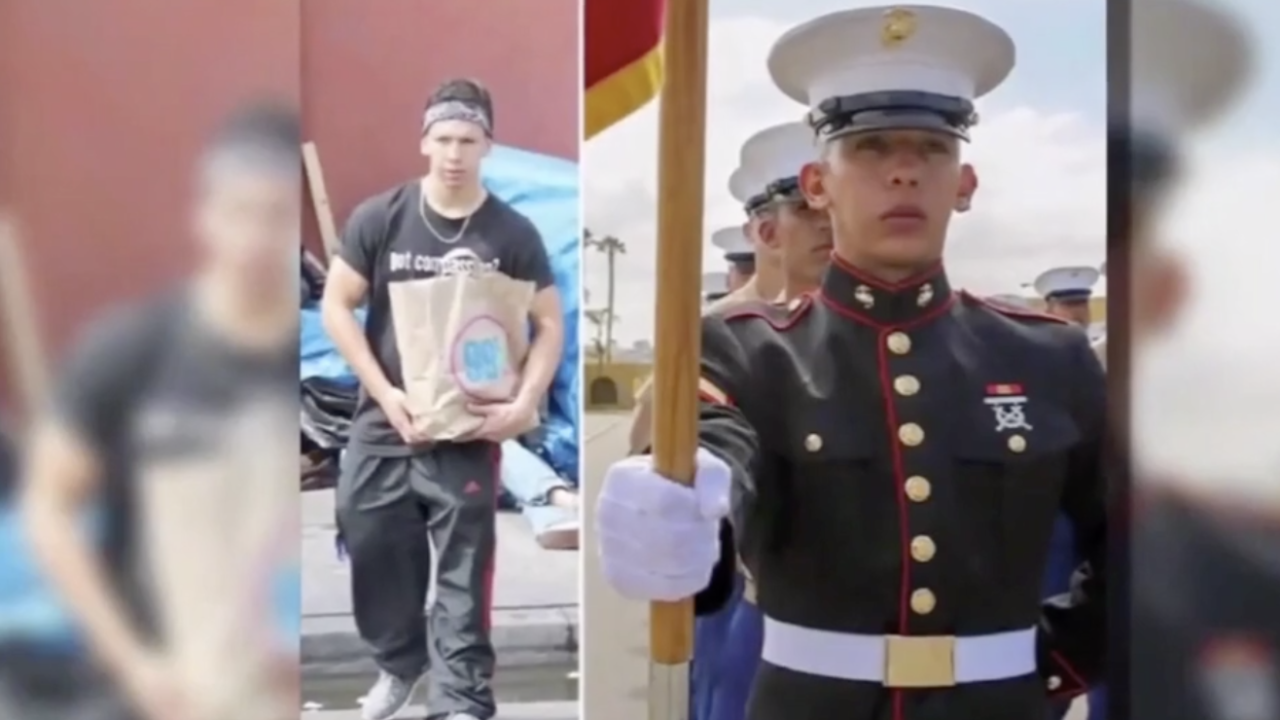 LOS ANGELES (CNS) - A gang member convicted of murdering a 19-year-old Marine from Camp Pendleton, who was found shot inside his car in South Los Angeles in 2016, was sentenced Monday to 100 years to life in prison and a co- defendant was handed a 50 years-to-life term.

Los Angeles Superior Court Judge Kathleen Kennedy said she believed the two men convicted in the killing of Lance Cpl. Carlos Segovia-Lopez acted ``on the spur of the moment,'' adding that Oscar Aguilar ``was going to use that gun on somebody.''

Aguilar, 28, was convicted in May, along with fellow gang member Esau Rios, 31, of one count each of first-degree murder and shooting at an occupied motor vehicle, and jurors found true allegations that Segovia-Lopez's killing on Sept. 16, 2016, was committed in association with or for the benefit of a criminal street gang.

Jurors also found Aguilar guilty of one count of possession of a firearm by a felon, and found true an allegation that he personally discharged a handgun.

``I think a prison term of 100 years to life is sufficient,'' Kennedy said of Aguilar's sentence.

Rios' attorney urged the judge not to impose the gun enhancement and hand down a sentence of 25 years to life for his client, who he said had no criminal record and ``was in fact drunk when the crime was committed.''

Deputy District Attorney Carmelia Mejia countered that Rios was ``roaming the streets with a known gang member'' and ``continued (in jail) to show his dedication to his ... gang life and with that, a life of crime.''

Before imposing Rios' 50-year sentence, Kennedy said, ``The defendant encouraged the co-defendant to pull the trigger.''

The victim's mother offered a tearful statement to the court, barely able to speak through her sobs at the outset.

``Carlos was smart, sweet, kind, sincere,'' Sandra Lopez Juarez told the court. ``I've been a single mother. So in my house, he was a father figure for my kids, a great support for me.''

She said her son volunteered with the homeless, tutored children in a USC-sponsored program and worked with the Big Brothers Big Sisters organization.

Hundreds of people came to the hospital to pray when her son was on life support and ``all of them had a story to tell about him,'' she told the court, adding that she keeps his life-size photo in a room at her home and she and her daughters blow out candles on his birthday cake each year.

On Mother's Day and her birthday, her son would cook for her and bring her flowers, she said.

``He can't bring me flowers anymore, so I bring him flowers,'' Lopez- Juarez said of her trips to the cemetery.

``I believe in the United States justice,'' Lopez-Juarez, who was born in El Salvador, told the court. ``I have been praying for justice.''

Claudia Perez, the founder of LA on Cloud 9, a nonprofit organization where the victim volunteered helping the homeless, begged the judge to impose the maximum sentence, then spoke directly to the defendants.

````You will never spend enough years in prison to make up for the life you took,'' Perez said. ``May God have mercy on your souls.''

The judge drew a contrast between the lives of the victim and the gunman.

``I've tried in vain to find something positive about Mr. Aguilar,'' Kennedy said, citing no evidence that he'd ever held a job or graduated from school.

Segovia-Lopez, who was from Los Angeles, was on leave from Camp Pendleton in San Diego County when he confronted Aguilar and Rios after seeing them possibly tampering with vehicles.

``There's no evidence that Carlos tried to hurt anybody'' or threatened violence, Kennedy said, pushing back against a defense sentencing memo citing provocation.

Aguilar and Rios had been hanging out together and drinking. At Rios' direction, Aguilar approached the Marine, who was sitting in his Dodge Charger at 31st Street and St. Andrews Place, and shot him once in the head, according to testimony.


Segovia-Lopez was found covered in blood and slumped over the steering wheel. He was taken off life support three days later after doctors informed his family that he could not be saved. Aguilar and Rios were arrested by Los Angeles police nearly two months later, and have remained behind bars since then.

``There's a certain irony here that Carlos joins the military to defend his country and yet he's shot to death unarmed, out of uniform in the streets of Los Angeles,'' the judge said at the sentencing hearing.

As a juvenile, Aguilar was convicted of assault with a deadly weapon with great bodily injury in 2008 and also has prior convictions for felony vandalism, criminal threats and possession for transportation or sale of narcotics, according to the District Attorney's Office.

Another co-defendant, Ricky Valente, 21, pleaded no contest to being an accessory after the fact and was sentenced in June to three years probation.

At an October 2016 memorial service for Segovia-Lopez at the Cathedral of Our Lady of the Angels in downtown Los Angeles, Mayor Eric Garcetti praised his work with the homeless.

``For Carlos, that was not some class of other people. That was his brother,'' Garcetti said.

``At a moment when we want to denigrate each other because of where we come from, what uniforms we serve, or we think we know people before we know them, let us all stop and learn and find who we are -- the connections that unite us, not the ones that divide us,'' Garcetti said. ``Let us make the passing of Carlos something that bring us together in service and love and unity. At the end of our days we're left with two things: who did we know and what did we do. By that measure, Carlos, you left and led the most blessed of lives.''