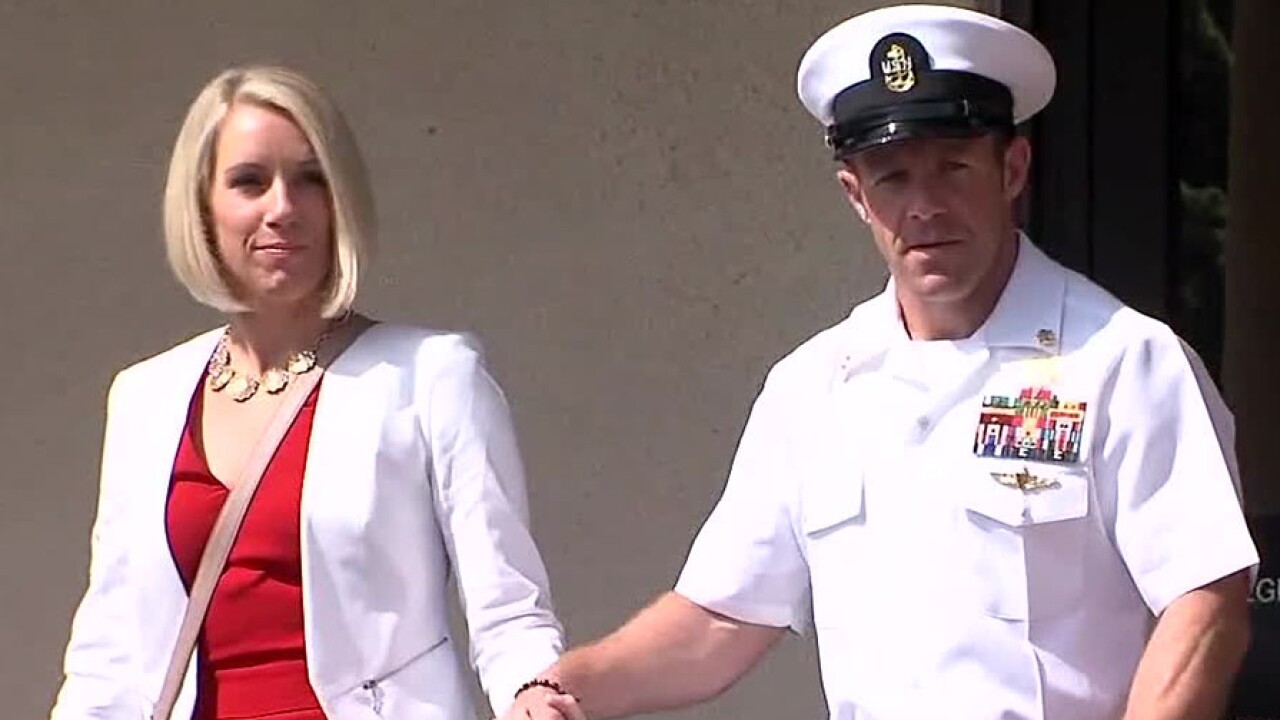 SAN DIEGO (CNS) - Former Navy SEAL Edward Gallagher, who was acquitted of murder and attempted murder charges last year stemming from allegations that he fatally stabbed a wounded teenage ISIS fighter and shot Iraqi civilians, is suing the Secretary of the Navy and a New York Times reporter, alleging the reporter defamed Gallagher with the help of Navy officials illegally leaking him documents.

The suit accuses the Navy of leaking "about 500 pages of confidential documents from the Navy's criminal investigation" on Gallagher to reporter David Philipps, who extensively covered the allegations against Gallagher prior to and after his trial at Navy Base San Diego last year.

The suit also names as a defendant Navy Secretary Kenneth J. Braithwaite, who was sworn in to his post Friday, the same day Gallagher's lawsuit was filed in San Diego federal court.

Representatives of the Navy and New York Times could not immediately be reached for comment.

Gallagher was acquitted in July of several serious charges related to the alleged slaying of a teenage boy, as well as allegations of firing indiscriminately on civilians from a sniper's nest, which could have had him facing life in prison. However, he was only convicted of posing with the teen's body in a photograph, resulting in a demotion in rank. President Donald Trump, who publicly supported Gallagher throughout the allegations, restored Gallagher's rank in November.

According to the lawsuit, "corrupt Navy officials" conspired to defame Gallagher by leaking information to Philipps, who published several articles that Gallagher's attorneys allege presented false information to discredit the former SEAL.

The complaint further alleges that Philipps wholly fabricated some allegations against Gallagher, including that Gallagher routinely fired on civilian neighborhoods and tried to run over a Navy Police officer in 2014.

The suit alleges information leaked to Philipps included "witness interview summaries and seized text messages" from the criminal investigation and "a complete list of other SEALs that Chief Gallagher had deployed with on prior occasions" so that Philipps could contact them for his stories.

Navy officials hoped "negative publicity would help to pressure Chief Gallagher into taking a plea, as well as to influence any potential jury pool," the complaint alleges.

"Navy officials presented David Philipps with a golden egg," the lawsuit alleges. "They would illegally provide him with certain protected documents, in clear violation of the Privacy Act and court orders, so that Philipps could write a damning portrayal of Chief Gallagher, with reckless disregard for the truth."

The suit, which seeks unspecified damages, alleges Gallagher has suffered "significant mental and emotional anguish" through the Navy's "violations of the Privacy Act and unlawful disclosure of Chief Gallagher's private information to David Philipps."

The lawsuit is not the first time Gallagher's attorneys have accused Navy officials of misconduct.

The trial judge, Capt. Aaron Rugh, removed prosecutor Cmdr. Chris Czaplak from the case just before the trial was set to begin, ruling the prosecution sent emails to the defense and the Navy Times reporter that were embedded with code that would track the recipients' email activity.

The findings led Rugh to order that Gallagher be released from custody due to violations of his Fourth and Sixth Amendment rights and that his maximum possible sentence of life without parole be reduced to life with the possibility of parole.