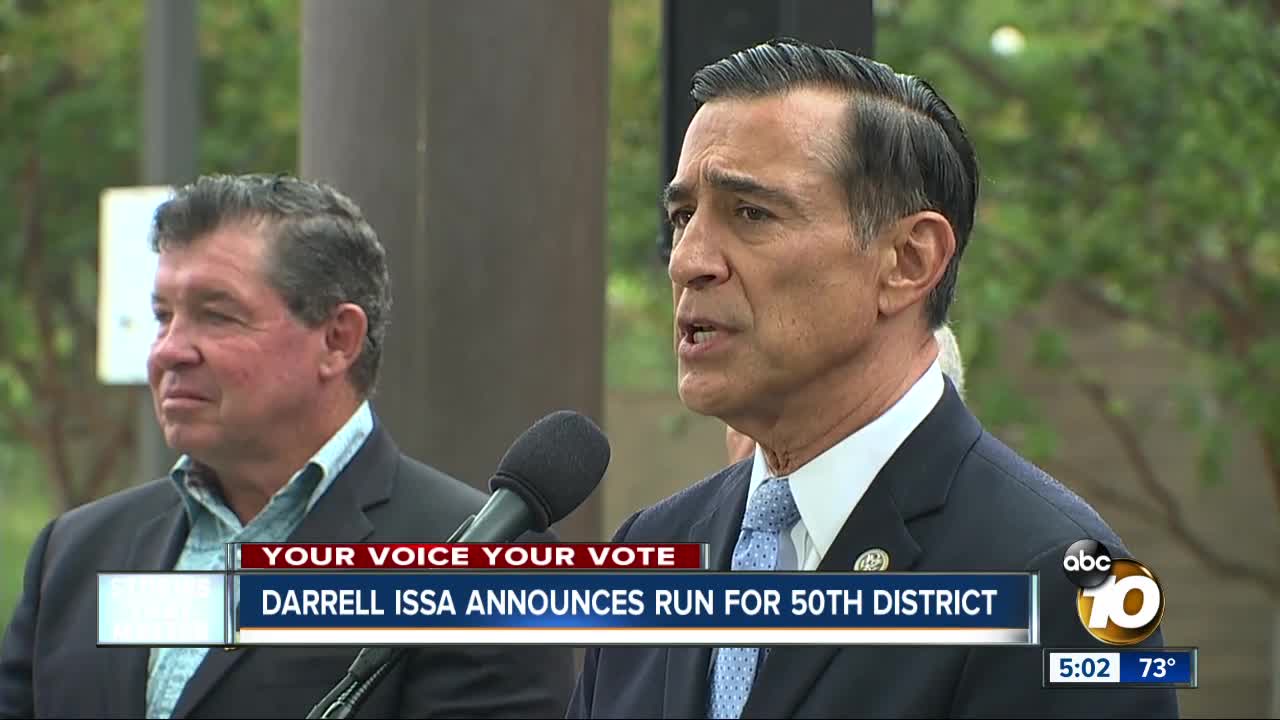 Former congressman Darrell Issa announced Thursday that he is entering the race for Congressional District 50. 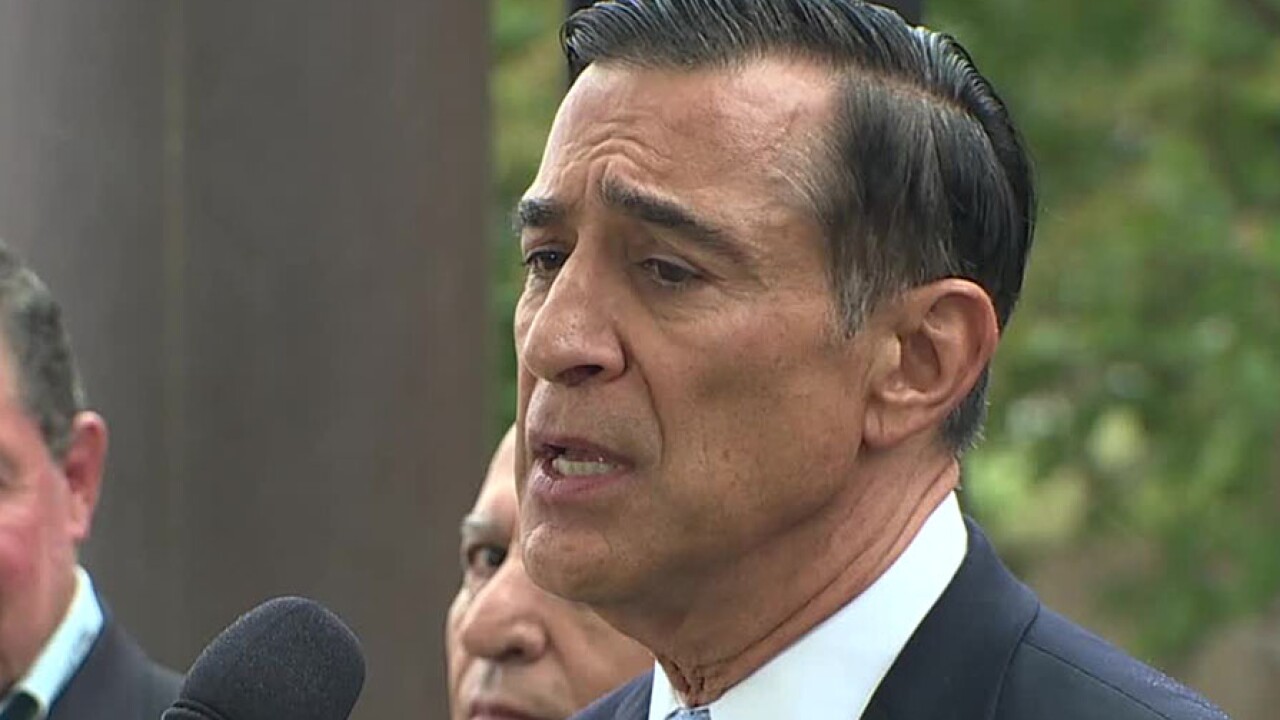 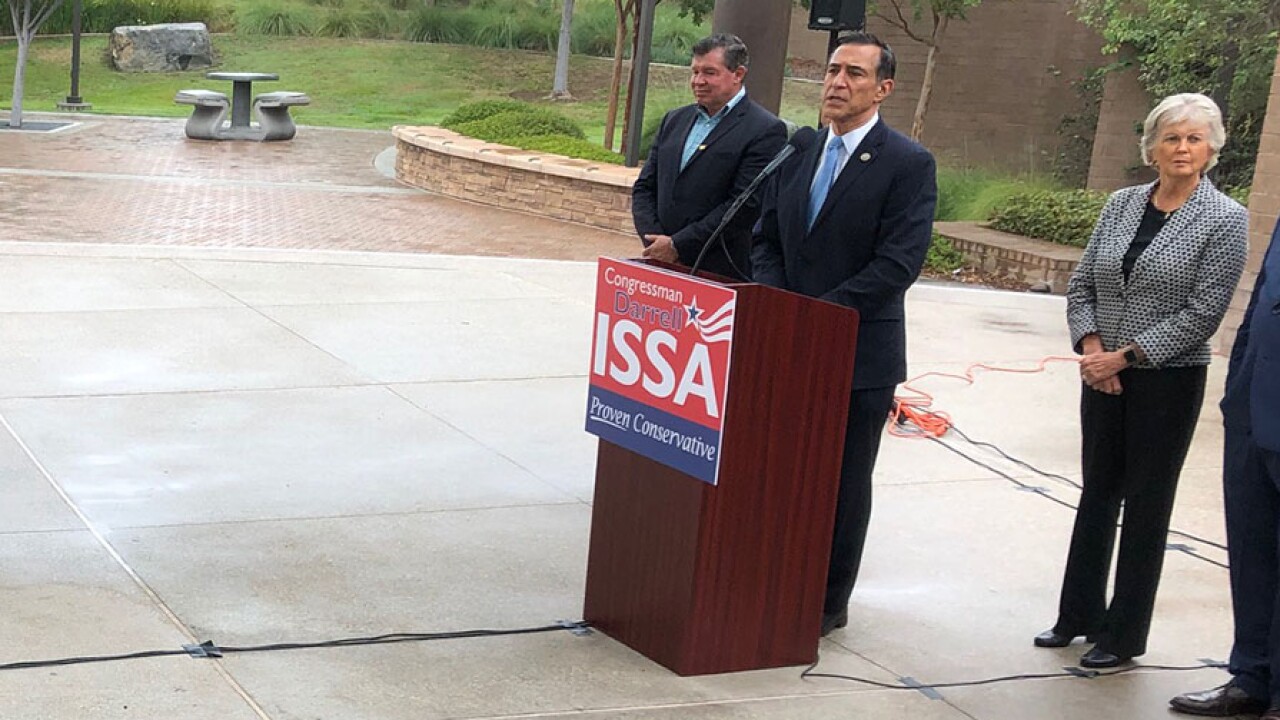 Issa, 65, held a morning news conference to announce the launch of his campaign and was joined by El Cajon Mayor Bill Wells, Temecula Mayor Matt Rahn, former Escondido Mayor Sam Abed and former U.S. Navy SEAL Larry Wilske, who were all running for the seat before the announcement.

All four candidates elected to drop out of the race and throw their support behind Issa, who also received an endorsement from San Diego County Supervisor Dianne Jacob.

Issa declined a re-election run in the 49th District in 2018 after winning his 2016 bid by less than one percentage point. Last September, President Donald Trump nominated him to be the director of the U.S. Trade and Development Agency, but his Senate confirmation process has remained stalled since then.

Issa met with Trump last week to inform him that he would not continue to pursue confirmation to the senate administration post and would instead launch his campaign to return to Congress.

"I am tremendously grateful for the confidence you placed in me by nominating me to serve in your administration, but after more than a year of delay caused by partisan obstructionism, I am ready to move forward with an alternative opportunity to return to public service," Issa wrote in a letter to the president this week.

The seat is currently represented by Rep. Duncan Hunter, R-Alpine, who was indicted in August 2018, along with his wife, on five dozen criminal charges, including conspiracy, wire fraud and record falsification, for allegedly misusing campaign funds. Margaret Hunter has since pleaded guilty to conspiracy and is cooperating with prosecutors. Her husband maintains his innocence.

Hunter won a sixth term last November, defeating Democratic candidate Ammar Campa-Najjar with 51.7% of the vote. The path to a seventh term appears more fraught for Hunter, whose trial is slated to begin next year in federal court.

With rumors of a possible resignation swirling, Republican politicians have swarmed to run for the seat in the event Hunter foregoes a run, is too politically damaged or cannot legally run in 2020.

Campa-Najjar, meanwhile, never really stopped running for the seat and is likely the Democrats' best hope of flipping it. In a statement, Campa-Najjar said Issa entering the race shows the district, and Hunter in particular, is vulnerable to be flipped.

In response to Issa's entry in the 50th District race, a spokesman for Hunter told 10News: "Congressman Hunter has been honored to earn the support of his constituents and proudly represent them in Congress for six consecutive terms. He is running for re-election so that he can continue the important work he is doing to support President Trump and to continue focusing on the issues that are important to him and his constituents. Congressman Hunter looks forward to earning their support again in 2020."