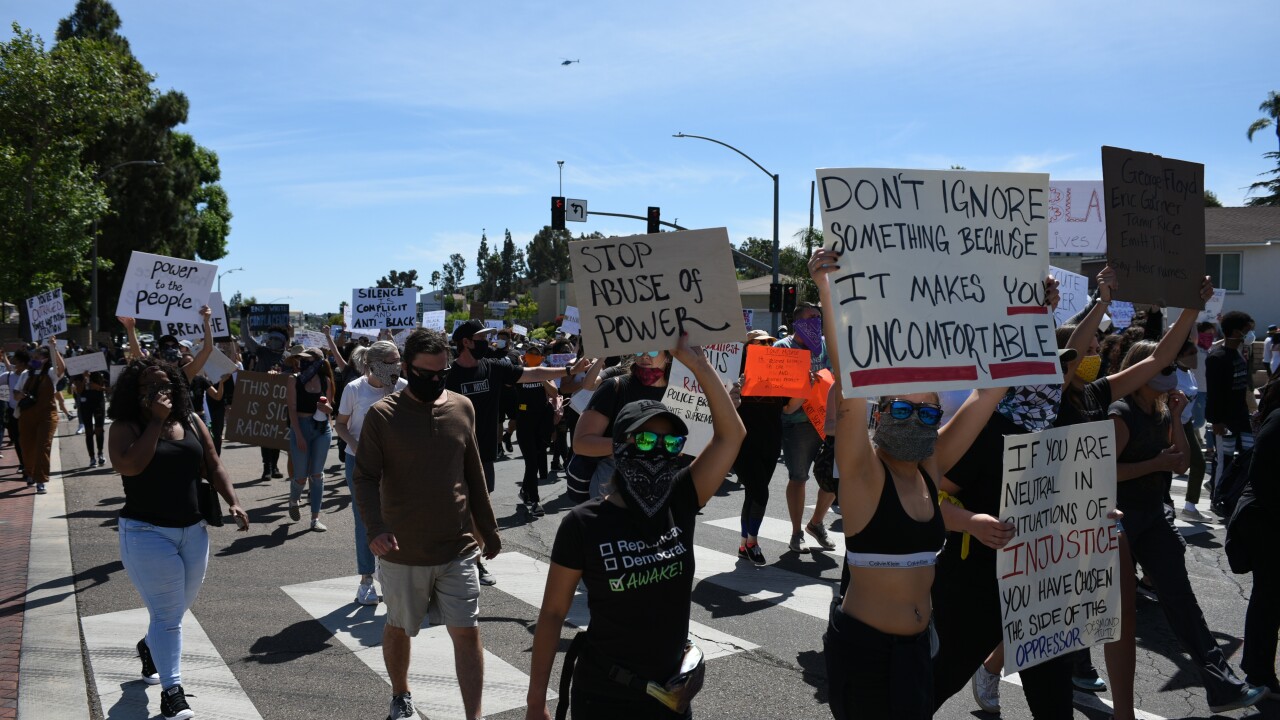 Credit: Local Musician Todd A. Davidson
Thousands of protesters marched through La Mesa protesting an arrest video that surfaced earlier this week as well as the death of George Floyd in Minneapolis by a police officer.

LA MESA (CNS) - The family of a grandmother who was struck in the face by a law enforcement projectile, suffering severe injuries, during a weekend police protest in La Mesa called Tuesday for the officer involved to be publicly identified, fired and charged with attempted murder.

Cellphone video that has gone viral shows 59-year-old Leslie Furcron lying on the ground, blood streaming down her face, amid shouting demonstrators attending the Saturday evening protest against police brutality.

Furcron remains hospitalized in an intensive-care unit in a medically induced coma and may lose one of her eyes, according to her family and their attorney. They held a news conference outside La Mesa City Hall to demand that the officer who fired the projectile, which struck her in the forehead, be held accountable.

Dante Pride, an attorney representing the family, said he had reviewed dozens of videos and spoken with scores of people present at the protest outside La Mesa police headquarters and has seen no evidence that Furcron was violent or did anything to justify being shot.

Furcron was holding up her cellphone, recording the protest, when an officer opened fire, Pride said. The other demonstrators also were being peaceful and received no warning from law enforcement before "the tear gas came and the bullets rained down," he said.

Pride said he believes the involved officer purposely aimed at Furcron's head, in contradiction of the LMPD's rules regarding use of force, which he said hold that projectiles be aimed below the waist.

It's uncertain whether the officer who opened fire was with the La Mesa Police Department or another agency, though Pride said he believes it was an LMPD officer.

A representative of the San Diego County Sheriff's Department said the regional agency had no role in the shooting.

A La Mesa police spokesman did not return a telephone call seeking comment.

Two of Furcron's sons, Ahmad and Azim, described their mother as a law- abiding La Mesa resident. Ahmad Furcron demanded that police hold their own accountable, as they would any other citizen.

"If I commit a crime, I'm going to jail, no ifs, ands or buts about it," he said. "Whoever that was needs to stand and (be) held accountable for it. That's attempted murder. My mom was shot between the eyes, 59 years old, protesting. She doesn't have the right to protest?"

Pride called on the general public to demand that law enforcement officials release the name of the involved officer and asked anyone with video footage of the events surrounding the shooting to forward it to him.

The lawyer added that if the department is unable to determine which officer fired the projectile, the incident still highlights issues with police practices regarding crowd dispersals.

A GoFundMe.com page has been created for Furcron, with more than $91,000 raised by late Tuesday afternoon. Pride said they expect her medical bills to near $1 million when all is said and done.

The page can be viewed online here.