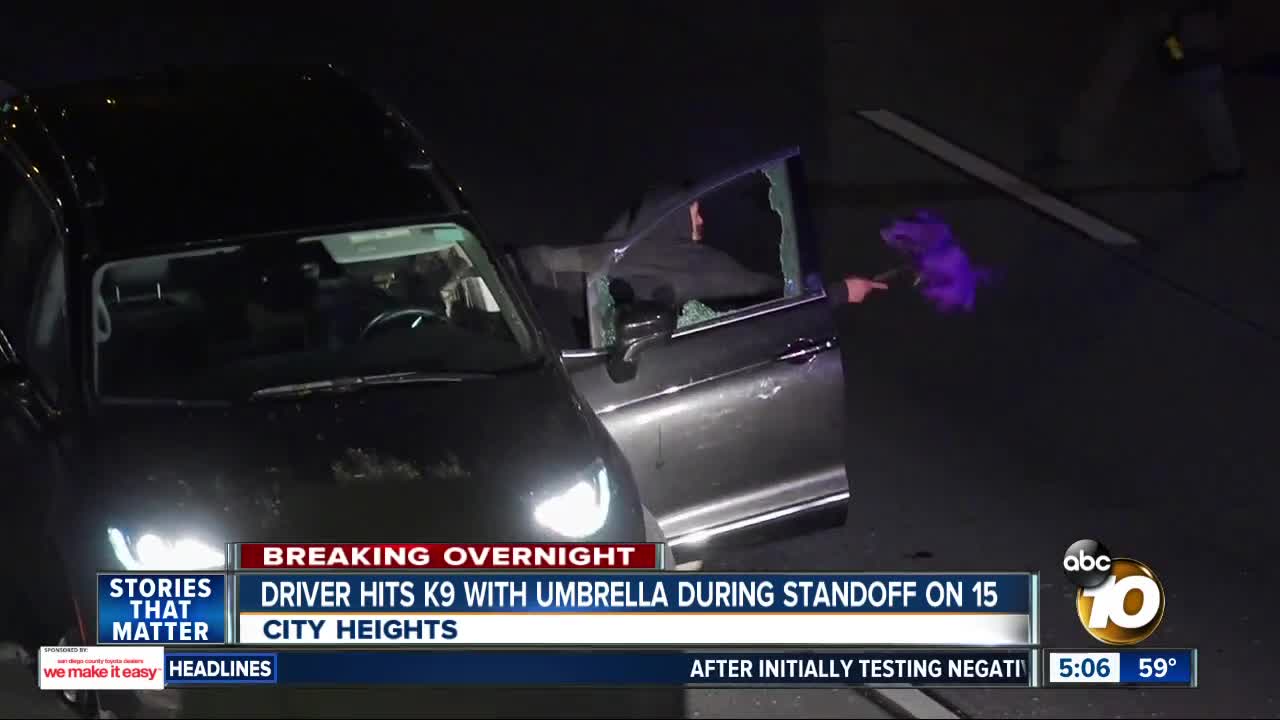 A hit-and-run investigation in the North County led to a high-speed chase that eventually evolved into a standoff in the middle of the freeway during which the driver struck striking a sheriff’s K-9 with an umbrella. 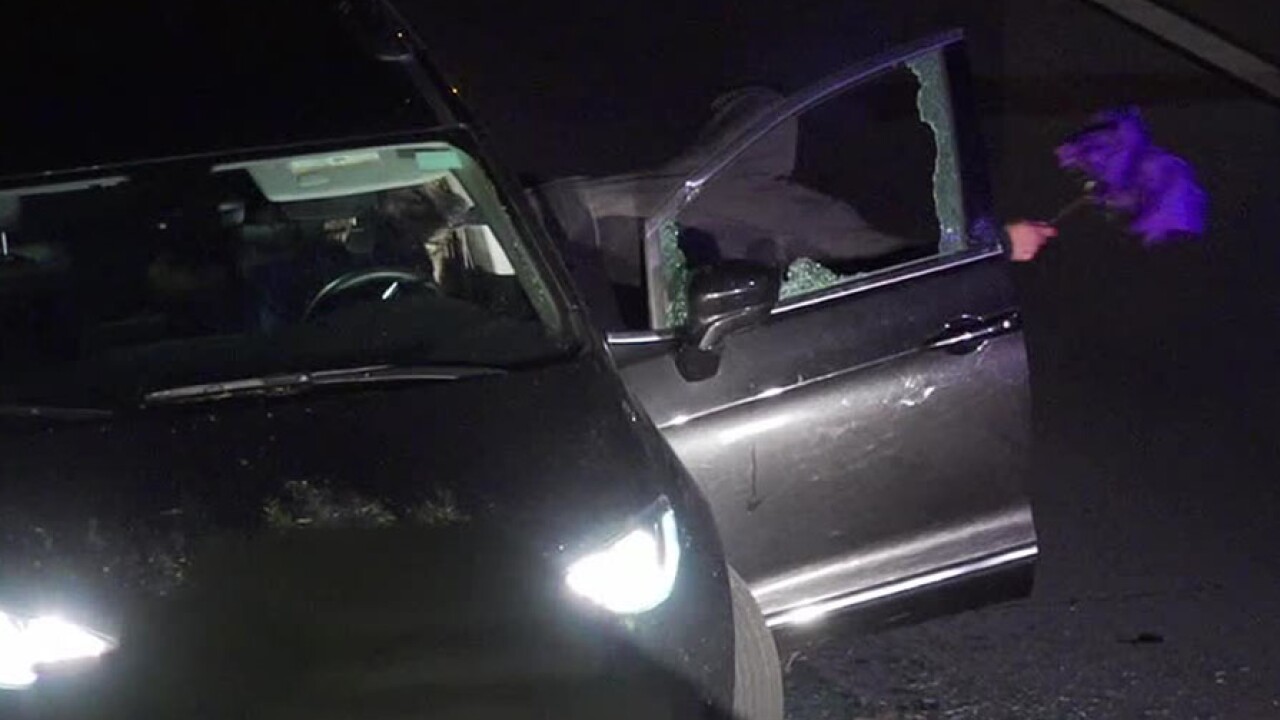 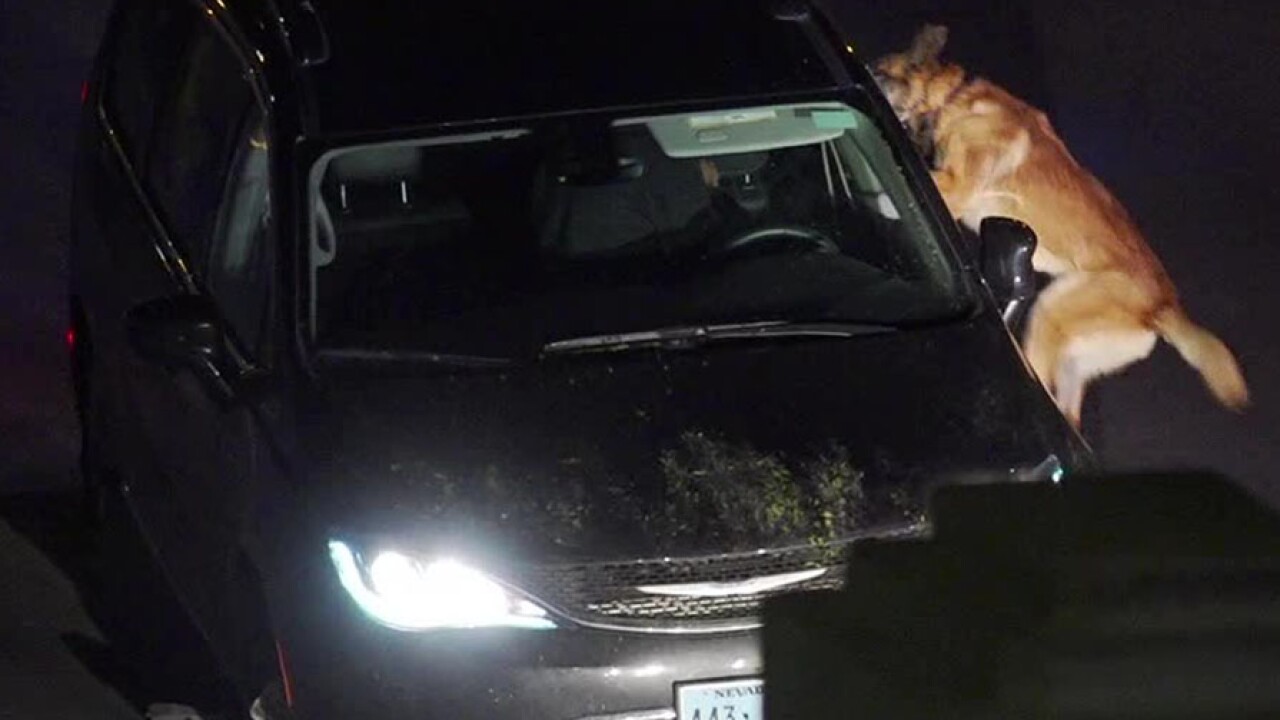 SAN DIEGO (KGTV) -- A hit-and-run investigation in the North County led to a high-speed chase that eventually evolved into a standoff in the middle of the freeway during which the driver struck a sheriff’s K-9 with an umbrella.

At around 10 p.m. Monday, the California Highway Patrol was called to investigate a reported hit-and-run crash on southbound Interstate 5 near La Costa Avenue in Carlsbad. CHP officials learned the truck involved was reported stolen out of La Habra.

However, the truck’s driver fled the scene on foot and responding officers and San Diego County sheriff’s deputies were unable to locate him.

A short time later, authorities received reports of a minivan theft in an Encinitas neighborhood and when deputies spotted the vehicle and tried to pull it over, the driver sped away at a high rate of speed.

Deputies followed the van onto southbound I-5 before it transitioned to southbound Interstate 805. The van ran over spike strips that were set down near El Cajon Boulevard, causing damage to one of the vehicle’s front tires, but it kept going.

After making his way to northbound Interstate 15, the driver stopped in the middle of the freeway lanes near El Cajon Boulevard and refused to get out of the van.

With the dog’s jaw attached to his arm, the driver tried to get the animal off by swatting it with an umbrella. As the driver made his way onto the freeway lanes, deputies were able to corral him and took him into custody.

According to CHP officials, the driver -- identified as Daniel Medina of La Habra -- was booked on the following charges: felony evading, suspicion of being under the influence of drugs, resisting arrest, and malicious mischief.

The sheriff’s K-9 was not injured.