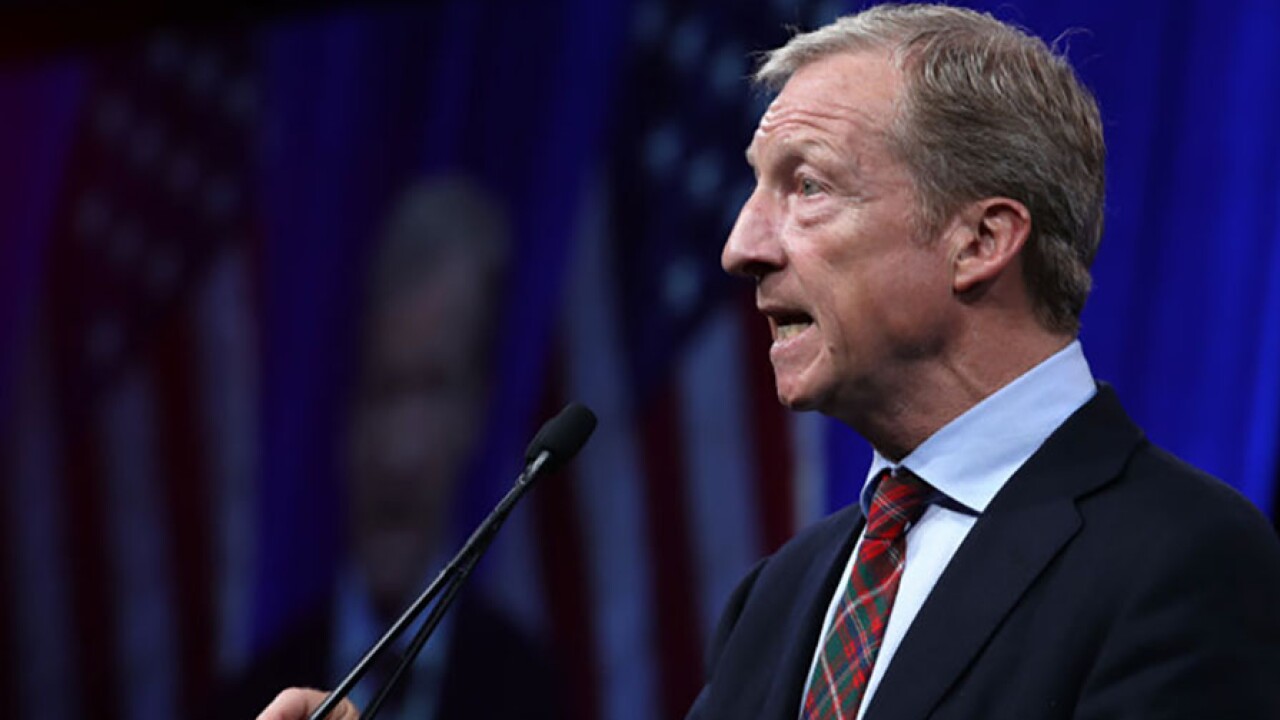 SAN DIEGO (CNS) - Tom Steyer is set to tour an immigration center and meet with supporters Tuesday in his first visit to San Diego since declaring his candidacy for the 2020 Democratic presidential nomination.

Steyer is scheduled to meet with supporters at 5:30 p.m. at Stone Brewing World Bistro and Gardens at Liberty Station at 2816 Historic Decatur Road. RSVPs can be made at mobilize.us/tom2020/event/114139.

Steyer, 62, announced his candidacy July 9 after ruling out a potential bid for the nomination in January.

"Corporate money has corrupted our democracy and stripped Americans of our ability to determine our own future," Steyer said in the nearly four-minute video announcing his candidacy. "The only way for us to solve the urgent problems facing our country is to loosen the stranglehold that corporations have over our politicians and return political power to the American people."

The day Steyer declared his candidacy, Steve Guest, the Republican National Committee's rapid response director, said, "The only thing Steyer's campaign will do is light more of his money on fire as he joins the rest of the 2020 Democrat field in pushing policies that are way outside the mainstream."

Steyer unveiled his "5 Rights" platform on July 18. It was developed in December after traveling across the nation and meeting with voters.

-- "The Right to an Equal Vote," where "everyone must have an equal voice to demand justice from our government, and everyone must be able to vote with no discrimination and no barriers”

-- "The Right to Clean Air and Clean Water," where "everyone has the right to breathe fresh air and drink clean water, free from industrial poisons" and "corporations must not be able to violate this right for the sake of their profits”

-- "The Right to Learn," where "government must protect the right to a free, quality, public education from preschool through college and on to skills training”

-- "The Right to a Living Wage," guaranteeing that "no one should be forced to work more than one full-time job just to survive, and no one should see their raise eaten up by the rising cost of living”

-- "The Right to Health." "Universal health care must be a right, not a privilege, so everyone has the chance to live a healthy life, and our government needs to act to protect the foundations of our health”

Steyer has committed to spending upward of $100 million of his own money on a campaign in which he entered later than any other candidate.

Steyer founded the investment firm Farallon Capital in 1986 after spending time working at Morgan Stanley and Goldman Sachs in the late 1970s and early 1980s. In 2012, he chose to leave Farallon Capital to focus on activism and fundraising efforts related to climate change and alternative energy sources.

After supporting and fundraising for former President Barack Obama in 2008 and 2012, Steyer founded NextGen America in 2013, a political action committee focused on climate change and environmentalism.

NextGen America has also fundraised and contributed to Democratic campaigns and politicians around the nation, awarded grants to national organizations offering immigration law services and registered young people to vote around the nation.

Steyer began an effort to impeach President Donald Trump in October 2017 with a multi-million dollar television and digital advertising campaign. He has also argued the need for a "real" billionaire to take on Trump. Steyer's Need to Impeach campaign has garnered more than eight million signatures.

In his first month in the race, Steyer spent roughly $7 million on advertising, including a $3 million ad buy on Facebook. He needs to reach 2% in a fourth national or early-state poll from a qualifying polling organization by Wednesday's deadline to qualify for September's debate in Houston.