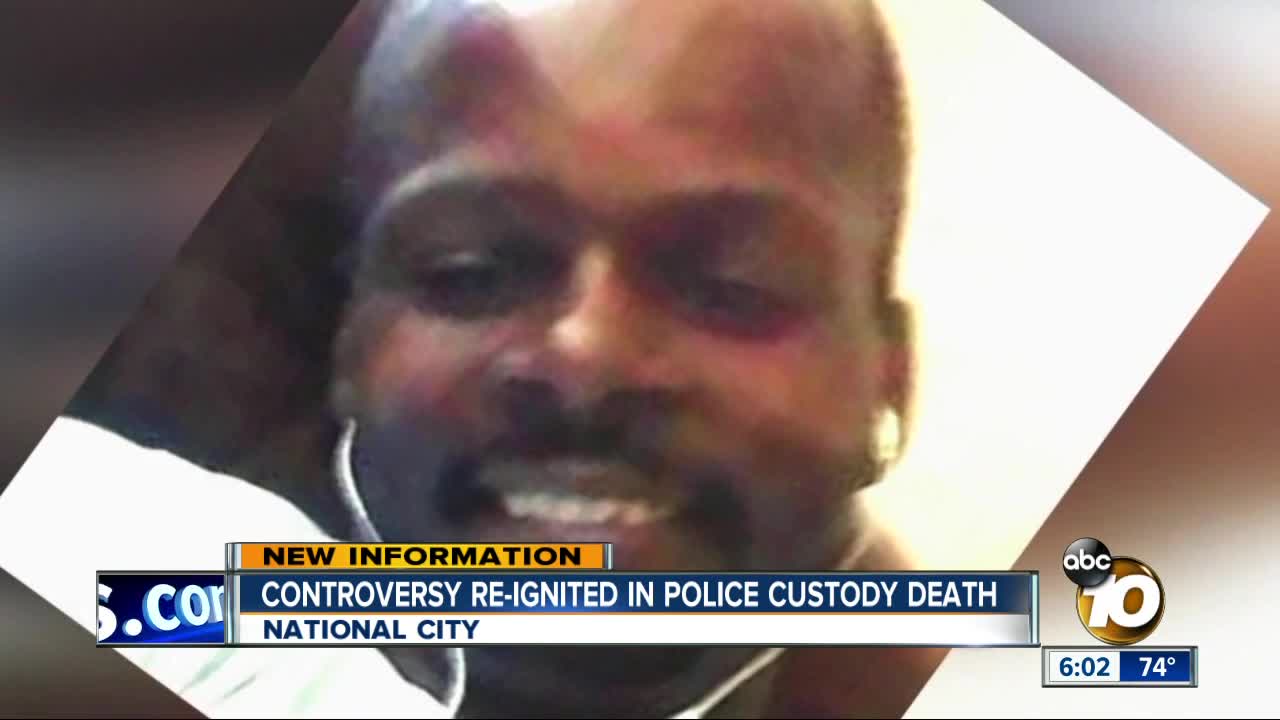 A controversy has been re-ignited in a police custody death.

NATIONAL CITY, Calif. (KGTV) -- The family of a man who died in police custody more than a year ago says a citizen review board supports their belief that law enforcement played a role in their loved one's death.

Earl McNeil showed up at the National City Police Department in May of 2018 asking for help. Police said he was acting erratically and they found a small amount of methamphetamine on him.

They took him into custody. Police body camera footage shows McNeil screaming as officers used a restraining device called a WRAP. According to police and sheriff's deputies, McNeil continued spitting on them and claimed he was HIV positive.

The Citizens' Law Enforcement Review Board Report shows that once McNeil was brought to the jail, the sock was soaked, so a second sock was placed over him. The decision was made to call an ambulance, rather than book McNeil into jail.

According to the review board's report, while waiting for an ambulance to go to the hospital, McNeil spat at a deputy getting saliva on the deputy's face. The deputy then pulled McNeil's Tee-shirt over his face. The review board stated that covering someone's nose and mouth is a violation of the department's policy.

RELATED: No criminal charges to be filed in National City Police custody death of Earl McNeil

"CLERB recognizes that the use of McNeil's tee shirt as a shield was to prevent a potential life-threatening disease, protecting Deputy 1 and his partners, however, the placement of McNeil's tee shirt over the spit socks was in violation of policy and the conduct was not justified," according to the report.

"What it means is that somebody else believes that Earl McNeil was not treated right, there were policies violated and that Earl McNeil died at the hands of law enforcement," said McNeil family spokeswoman Tasha Williamson.

McNeil spent 16 days in a coma before his family took him off life support. The medical examiner says McNeil died from a lack of oxygen to his brain due to a heart attack.

RELATED: Lawsuit filed by family of man who died in police custody

"It wasn't just, as people were saying, a drug overdose, it was a multitude of things that happened to cause him to lose oxygen to the brain and they watched him as he died," said Williamson.

The sheriff's department issued the following statement in response to the review board's findings:

The Sheriff's Department respects CLERB's authority to review, investigate and report on in-custody deaths and we take their recommendations seriously. We have reviewed the May 26, 2018 incident involving Earl McNeil. After reading through CLERB's investigative findings, we believe their policy recommendations have merit. We will examine our policies to see how we might implement the listed recommendations. In regards to the alleged policy violation, we do not see enough evidence to support CLERB's investigative finding that the t-shirt was used in a way that affected Mr. McNeil's breathing. As the CLERB investigative report indicates, Mr. McNeil successfully spit on a deputy and saliva was misting through both the spit sock and the spit hood. Throughout the incident, Mr. McNeil told National City Police Officers and Sheriff's Deputies he was HIV positive while he continued to spit at them. Per the CLERB report, former Sheriff's Deputy Frantz used the t-shirt to shield Mr. McNeil's mouth to prevent him from continuing to spit on deputies. Deputies did not know if Mr. McNeil's statements were true or not at the time. As a result, we believe Deputy Frantz’ actions to be reasonable given the circumstances and actions taken by Mr. McNeil. There was no disciplinary action taken against the deputy.

The review board will decide Tuesday evening if it's going to adopt the final report. Supporters of the McNeil family are expected to speak during public comment.