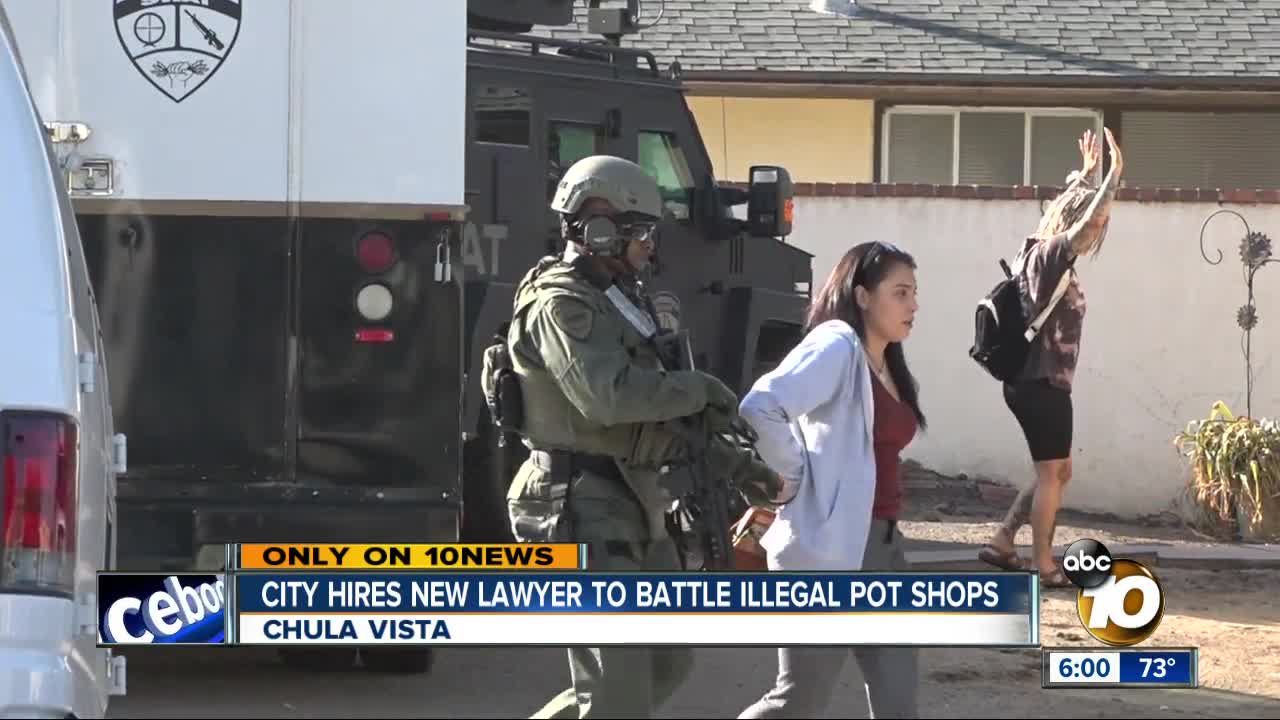 The raid in the 700 block of Third Avenue shut down an illegal shop called "Chula's Fuego Meds." Four people were arrested, including a man who said he was a security guard. Police found two loaded hand guns and about $50,000 in cash and products.

The issue is still rampant in Chula Vista after the city agreed to allow 12 legal distributors earlier this year. The locations and businesses specifically haven't been approved yet.

The more busts they do, the more police say they find felons in possession of firearms, other drugs like methamphetamine, as well as prostitution, running out of the illegal businesses.

"They're places with a lot of cash, a lot of drugs and a lot to lose," Chula Vista Police Captain Phil Collum said.

The reason the businesses pop up is simple: Cash.

Police say they open their doors, rake in the cash for a few months and move on. Googins said they've heard of instances where the day after a shop is busted, the "security guard" is handing out flyers to old customers, informing them of their new location.

"When you operate completely outside all law and regulation, you can move fast and operate quickly," Capt. Collum said.

"The businesses have been sealed up, literally with welded shut windows, steel plates on doors and windows, magnetically sealed doors that do not open in the event of a power outage or another emergency," Collum said.

Until now, the city and police department have been shutting down illegal pot shops with civil abatement warrants. They weren't able to seize the product or charge criminals. Instead the city could slap a $10,000 penalty on the business.

In March, they hired their first Criminal Prosecutor, and are working on getting funding for a full-time paralegal and an investigator. Together they will be called the Neighborhood Protection Unit. They hope to have those positions funded and filled by the end of this year or early 2020.

"We are out there, we are investigating you and we will be coming to close you down," Capt. Collum said.

Collum said he knows the industry will continue to change and he said the department will adapt with it, "we'll continue to be out there, we will move and change our enforcement methods as the needs of our community dictate and we are going to continue to make sure that our community stays safe no matter what happens in the future for cannabis."

Police say they're also learning some illegal dispensaries are operated by cartels and other organized crime networks.